WhiskeyintheJar's Reviews > How to Love a Duke in Ten Days

How to Love a Duke in Ten Days is the first book in the new series Devil You Know by Kerrigan Byrne and it is a wonderful start. The Prologue starts us off with seventeen year old Alexandra as she is called into the headmaster's office of the ladies' finishing school she has been attending in France. I do want to mention that there is a pretty intense rape scene, some might want to avoid reading. Skipping the prologue to avoid it would be possible but you would miss some bonding knowledge between Alexandra and her friends. The rest of the book has mention of the rape and how it affects Alexandra's relationships and how she is, can, and could be triggered in intimate moments with our hero Piers. I thought the author handled the respect and emotions beautifully around this issue and it provided some moments of tears and smiles.

A confusion of sensations paralyzed her. How could she feel both panicked and protected?

If you've read Byrne's work before, you'll know how her stories balance light and dark moments, she mastered them in this book. The fear Alexandra feels with Piers in the beginning before she knows him was tempered exquisitely with the playfulness between the two. Alexandra and Piers get to know one another and the first half is Alexandra learning to trust Piers.

After the prologue, we jump ahead in time ten years and Alexandra gets a note from her friend Francesca telling her she needs her help and an invite to her betrothal ball to the Duke of Redmayne aka The Terror of Torcliffe. Francesca, along with Cecilia, are the friends Alexandra made at the France school and they formed The Red Rogue Society. They all have red hair and sneak away at night to “further their education”, basically try things young men get to experience but are forbidden to ladies. The night of Alexandra's rape bonds them together, along with the school's gardener, as they bury a secret. I loved how Byrne wrote this group of women and how their personalities were so different but their friendship was solid. I feel like historical romance is full of men groups who are bonding together in some way and I liked the script flipping here.

She was a soft, silver moonbeam in a room full of glowing golden candles.
And all the more radiant for it.

When Alexandra and Piers meet there was a definite crackling of tension but even though these two were very guarded characters, it was their lightness together that won my heart. Byrne's writing style is very reminiscent of the bodice rippers of old, you'll get some faint purple prose elongated sex scenes and drama, which sometimes can get a bit much. I thought this was most apparent with Pier's nickname of Terror of Torcliff; except for the scars on his face, there didn't seem to be a reason for it. I also thought his background could have be fleshed out more, we're told about his mother and father, but especially his relationship with his half-brother, it wasn't as filled out as I would have liked.

The reason for Piers wanting to get married is so that he can produce heirs because he doesn't want his cousin inheriting, the cousin who ended up marrying Piers fiancee. This whole situation is probably what I would have cut out as it too wasn't especially filled out and the vitriol towards the ex-fiancee felt a bit much and I'm just particularly sensitive towards hate at woman at the moment. Bringing Piers in through Francesca would have worked on it's own for me.

Francesca wanting to marry Piers is a whole conversation, there is a lot happening in this book, but Byrne does for the vast majority keep it together. Besides the red hair and more adventurous attitudes, The Red Rogues bond together for support because Cecilia has a very cruel father and Francesca watched her whole family be murdered by men in masks. While Francesca is obviously not the star of this story, her murder mystery definitely plays a solid underlining to it. This murder mystery, along with the first half mostly taking place in Piers' castle help to give this a slight Gothic feel.

She wondered if the world wold ever recognize that the Terror of Torcliff had never been a terror at all. But a man. A man possessed of so much wit, skill, charm, intellect, and humor, he was forever surprising her. Often delighting her.
Enchanting her, even.

The second half changes gears and after a little bit of marriage of convenience, the story moves to Normandy for Alexandra and Piers' honeymoon. As Alexandra has a doctorate of archaeology, Piers takes her to a current excavation of who could be a former Viking ancestor from William the Conqueror time. Some might think this comes in a bit oddly but I loved it, this additive was fun and what I look for when I read historical romance. It also helped to tie in the other mystery, someone has been blackmailing Alexandra over what happened ten years ago. Needing money to keep paying the blackmailer was the reason for Alexandra jumping in to marry Piers (Francesca never wanted to marry him, it was a set-up to gain info on who was responsible for her family's murder). This mystery wasn't quite as intriguing as Francesca's and I thought the ending conclusion was obvious and too Scooby Doo villain drama-ish.

While the first half was about Alexandra trusting Piers, the second half moves to Piers learning to trust Alexandra when he learns she's not a virgin. His issues with how his mother slept around and the betrayal from his ex-fiancee cloud his judgment and he says he won't touch her until ten days, when she gets her courses. Piers doesn't even want to be around Alexandra but she sets-up that they have to be together to learn one another for at least an hour a day. This setup is brought up and then kind of abandoned but the building blocks for the couple's relationship were still there so I didn't mind.

Because this inexhaustible emotion gathering inside of him threatened to completely dismantle him. He knew, then and there, that he'd walk through hell for her. He'd slay dragons and face entire armies. He'd circumnavigate the globe to lay her foes at her feet. And the power of whatever suffused him would assure him victory.

The story does start to drag a sliver around the sixty percent mark but I'm not sure what I would cut out. As I said, this is a busy story with Alexandra getting blackmailed, Francesca's murder mystery, someone trying to murder Alexandra or Piers or both, and the whole falling in love, but instead of a clogged incoherent story, Byrne ties everything together soundly and creates one heck of a reading journey. The best part is that I saw these two fall in love and all the other tidbits were great bonuses. Cecilia and Piers' half brother Ramsey are teased as the next couple and I can't wait to read their story and maybe get more information on Francesca's compelling story. I highly recommend How to Love a Duke in Ten Days, don't miss out on what looks to be shaping up to one amazing series.
43 likes · Like ∙ flag
Sign into Goodreads to see if any of your friends have read How to Love a Duke in Ten Days.
Sign In » 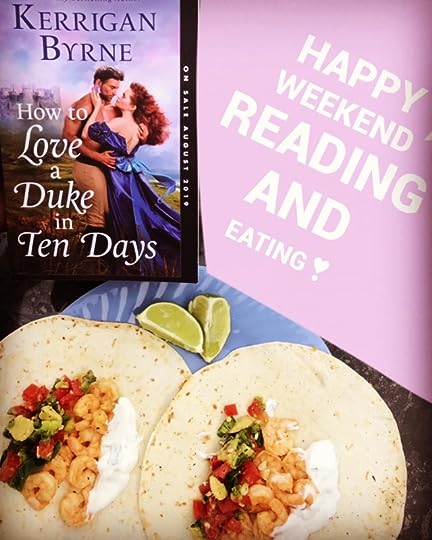 "
July 21, 2019 – 40.0% "He took the list from her trembling fingers, an affectionate fondness tilting his lips. “I almost want to check this for anything else, but I'm afraid to.”
There had been more. So much more she didn't write down. She'd wanted to ask him not to pull her hair. To request that the moon not shine. To inquire as to how violent his passions were.
She wanted to ask him, very bluntly, not to hurt her.

Splendid review! I was waiting to see how you rated this one before I added it. LOL! Sound good! 🤗

I think you’ll really enjoy it, Julie! It’s historical romance written in a way that I think many enjoy and have been missing. Can’t wait to see your thoughts when you get a chance to read.

Great review! I probably wouldn't have considered reading this book based on the blurb if it weren't for your detailed review.

Great review, Kyra! :)
I admit that I'm wary about reading another book by this author since I didn't like at all the #5 and #6 Victorian Rebels ...

@Missy - Thanks! I'm glad my review made sense. There was so much I wanted to talk about, trying to organize my thoughts and still state my feelings, well, obviously why I don't write books, lol. If you've liked Byrne's work before, you're definitely going to be pleased with this one and if new to her, it's an excellent place to start.

@Mei - I totally understand because I was too, I haven't even read #6 yet because she kind of lost me with #4 & #5. I don't feel like I'm going too far out on a limb when I say (because I know you've liked her books before) you're really going to like this one. Her writing is cleaned and tightened up (new editor? more care with editing?) and everything I enjoyed about her writing and tone before really shines here :)

WhiskeyintheJar/Kyraryker wrote: "@Mei - I totally understand because I was too, I haven't even read #6 yet because she kind of lost me with #4 & #5. I don't feel like I'm going too far out on a limb when I say (because I know you've liked her books before) you're really going to like this one. Her writing is cleaned and tightened up (new editor? more care with editing?) and everything I enjoyed about her writing and tone before really shines here :) "

That's great to know, Kyra! Thanks a lot for letting me know! I trust you! I'll try it this summer! :)

Hmmm. Your rating gives me hope that this is worth waiting for! Something to look forward to!

@Mei - Once I see it pop up on your currently reading, I'm going to be stalking your updates to see what you think! lol.

@Andrea - You'll recognize the bodice ripper 2nd generation feel and appreciate it, I think. Piers isn't dark like Dorian from Highwayman but the light little touches of how he acts towards Alexandra is perfect for their romance. The dark and stormy with rainbows aspect was nailed in this one, very excited to see where the rest of this series goes.

WhiskeyintheJar/Kyraryker wrote: "@Mei - Once I see it pop up on your currently reading, I'm going to be stalking your updates to see what you think! lol."

This is the OLNY time I agree with stalking! LOL