Sophie "Beware Of The Reader"'s Reviews > The Storm Crow

I can't believe this is a debut book!

I was in a book funk for two weeks. It never happened to me before but nothing tasted really exceptional. Nothing kept my attention.

I got this ARC of Storm Crow in a Fairyloot box (I confess that I ordered this box as I knew an ARC was included) and opened it without too high expectation but also I was curious.

The first sentences I nearly stopped because it happened in a universe that I did not get at first sight and as I said I had a hard time focusing these past weeks.
Yet I was soon immersed in that first night of celebration with huge magical crows raining sparks and fire or storm and rain or...
I had these pictured of magical fireworks and colors in a night sky created by these birds till...all Hell broke lose.
This dream began a nightmare. A night of destruction and annihilation of a country. A night of betrayal.

You got it I WAS IN!

I was engrossed in Thia's journey.

First through grief and depression. And that's another feather to the author's hat because how many times do you read about heroes being depressed in fantasy books?
And by depressed I mean really lost and wanting to hide under the covers all the time.
Depressed to the point you can't simply will to move and be better. Because it is not so simple. It does not work. It is beyond your control.

“This was why I’d hidden in my room, why I wanted to run there now. Alone, no one could make me feel like an ungrateful little girl, rejected and inferior. No one could look at me like Caliza was now: disappointed, impatient, accusatory. As if this were all in my head and it’d go away if only I tried hard enough.”

Hiding in your room and shirking your princess's duty making your people despise you?
The answer is simple: never. Or I have never encountered it so far. Even Feyre in ACOMAF was bad but Sarah J Maas did not go as far as Kalyn Josephson did.

Yet Thia before Rochnog was buoyant and daring. Full of life.

She will have to put herself back. For her country. For herself. 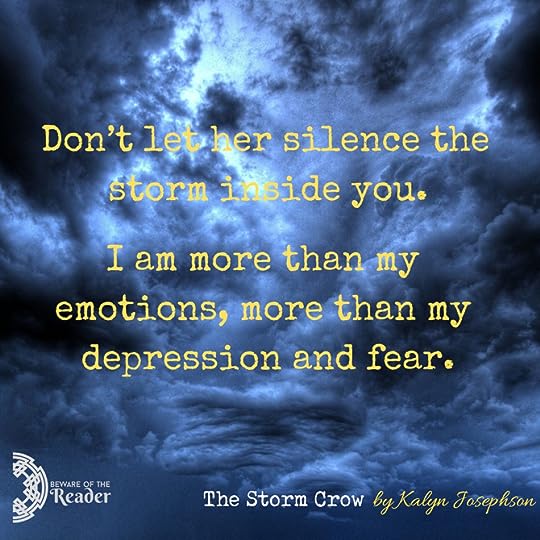 It was like the destruction of the crows snuffed all her vitality.
When she discovers the sole egg left unscathed from the disaster she knows she has to hatch it. It is the only chance of her country.
If she and her sister hope winning against queen Razel one day they have to get this last storm crow. Especially when prince Ericen heir to queen Razel and owner of a horrible reputation has to marry Thia.

This is the first book of a series, not published before seven months yet I want the sequel already!

You have all that makes epic fantasy and extraordinary read:

-Magic and magical crows;
-The clash of kingdoms;
-An evil and blood thirsty queen;
-A beaten yet strong heroine;
-A journey spiritual to regain her former self; intellectual as you have to solve the mystery to hatch crow's eggs and physical as Thia will follow prince Ericen to Rodel;
-A rebellion brewing undercover;
-A handsome enemy prince and an alluring inventor former fighter;

And many other things sure to enthrall fantasy readers.

I am really impressed and grateful to Kaylinn Josephson as she had my rapt attention and she gave back my love of reading.

Mark my words this is a future bestseller and bestselling series.


Do you want to read this one now?

Sign into Goodreads to see if any of your friends have read The Storm Crow.
Sign In »

Seems so good! I really want to read it now:D Great review:)

Well, you had me at "handsome enemy prince."