it was amazing
SEE REVIEW ON MY BLOG: HERE

Hello my name is Julia and I might have just found one of my new favorite fantasy series!
In truth, I've been anticipating Spin the Dawn for a while now, in fact, I mentioned it in my list of my most anticipated releases for 2019. The premise describes it as Mulan meets Project Runway, which, as an artist who's favorite Disney movie of all time is Mulan, sounds like my exact cup of tea, doesn't it? The book is a Chinese-inspired fantasy that takes place along a re-imagined version of the Silk Road. It also doesn't hurt that the cover is absolutely GORGEOUS, look at it! That being said, let me quickly get my thoughts in order.

What is this book about?
Spin the Dawn follows the tailor's daughter, Maia Tamarin. Maia lives in a kingdom that has just gotten out of a war, a war in which she has lost two of her brothers. Her third brother is left crippled and her father is in no state to resume his job. Even though women aren't allowed to perform any kind of "manly" work and are expected to be married off, Maia takes on most of the sewing in her father's shop. Despite the tailoring shop, Maia dreams of becoming the Emperor's tailor. When the emperor's current tailor passes away, a contest is announced to become the new royal tailor. Maia has no choice but to go after her dream, so she disguises herself as a boy and enters the competition under her brother's name. Together with twelve other tailors, she is asked to perform almost impossible tasks in order to win her spot at court. During the competition, she encouters the enchanter Edan, who takes an interest in Maia. When the final challenge of the competition entails sewing three legendary dresses, a feat no one has ever accomplished before, Maia has to set out to do the impossible to fullfill her dream.

What did I think of Spin the Dawn?
Okay, so like I said, what first drew me to this book was the unique concept. The combination between mythology and history plus the competition plot as well as the creative aspect all fit perfectly into my alley. Because the book is filled with so many elements, Lim has divided the book into three parts, which provided a clear structure, and also gave the reader an idea of what to expect. Because of this, I thought the pacing of the book was perfect. Never once did I find myself skimming sentences or hoping the story would move faster or slower. I literally devoured this book, people, especially towards the end. I absolutely loved it!

Whereas the concept of Spin the Dawn initially appealed to me, what really made me stay was the writing. From the first sentence on, I was hooked. Her writing has something about it that makes you keep reading. The book is filled with beautiful quotes and poetic language, but isn't confusing or overdone at all, which I find sometimes other books can do. I thought the writing was absolutely gorgeous and perfectly fit the concept. It also made the book easy to get through.

The characters were easy to relate to and realistic. Maia has endless devotion and perseverance. She refuses to give up her dream at all times, which is something to be admired. I also really admired her refusal to confirm to patriarchal norms just because of her sex, which made this an empowering story, and indeed very Mulan-esque. Her devotion to her job, her family and Edan really made me fall in love with her as a protagonist.

The romance between her and Edan, too, wasn't rushed and nicely developed in my opinion. I tend to go for the cocky characters who have a soft-spot so I found him to be really likeable as a love-interest and character overall. The interesting contrast when it came to Maia and Edan made them very compatable and intriguing to read about.

I thought the book ended on a very interesting note, and I can't wait to see what the rest of this series has in store. I think Spin the Dawn has just become one of my top favorite YA fantasy books, and I'm eagerly anticipating the next instalment (even though it's probably more than a year away, rip). Go read this awesome gem when it releases in July. I can't recommend this enough. 5/5!

** Review copy acquired through Netgalley **
10 likes · Like ∙ flag
Sign into Goodreads to see if any of your friends have read Spin the Dawn.
Sign In » 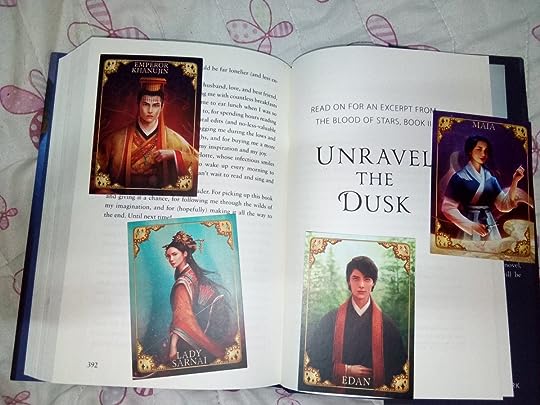 Question: Does Your Copy Have The Sneak Peek of Unravel The Dusk???????

Because My Copy Does