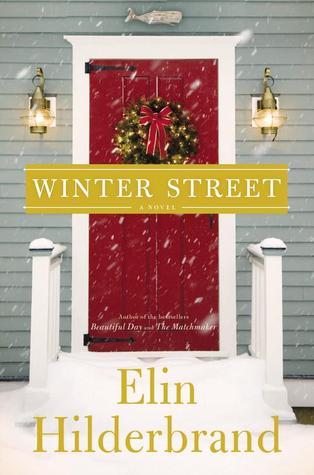 Winter Street sets the bait for the Winter series. I enjoyed the audio and as soon as I was done with it, I was purchasing the next book, Winter Stroll. I'm so happy all the books are out so I don't have to wait anytime in between discovering what will be the future of these characters.

Winter Street centers around The Quinn family. Kelley Quinn is the father. He owns a B&B with his current wife Mitzi. He's worried about the financial future of the Winter Street Inn but this concern takes second place when he finds his wife in a room with George, the Santa Claus who performs during the yearly Christmas party at the Inn. Before she leaves, Mitzi confesses that her affair with George has been ongoing for twelve years every single Christmas holiday.

Margaret Quinn is Kelley's ex-wife but she's also the most famous women on TV. She's part of America as she delivers the daily news. She's currently seeing a pediatric surgeon and is spending Christmas with him in Hawaii instead of Nantucket until she learns something that pulls her back to her ex-husband's home.

Patrick is the eldest son and Kelley and Margaret's favorite too. He's a broker and supposedly a great businessman except he let his greed take hold of him and now he's being investigated for inside trading. Patrick is married to Jennifer and they have three children.

Ava is the only daughter. She's a music teacher whose love life is a mess. She's in love with Nathaniel but he's not as serious with their relationship as Ava wishes it to be. She wants more from him. Ava does have Scott in her life. She knows he's in love with her but she doesn't think about him that way but maybe she should.

Kevin is living at the Inn. He's ex-wife Nora did a number on him. He lost trust in women but secretly he has been dating Isabelle, a French woman who works at the Inn too. He's going to be a father and he better get with the program before he loses his chance at happiness.

Last but not least is Bart. The youngest son of Kelley and the only kid by Mitzi. He was a loose cannon until he joined the Marines and now he has been deployed to Afghanistan. No one knows where he is at but they all hope he's safe.

Winter Street is full of drama. There are so many things happening all at once to this family that it should be impossible to believe it. Yet, I found myself being entertained by their angst, sorrow, persistence, and happiness.

I liked all the family members especially Margaret. She changed her plans to help her kids and ex-husband.

Winter Street ends up in a cliffhanger. I'm happy I didn't have to suffer through it for too long.

Thank you, Brandice. I'm doing the same. I love this family so much.

So happy to see you're enjoying this series. And believe me, it was torture having to wait a year in between books! Especially with the way she ends them. But, I guess it game me an excuse to the re-read them each year. 🤣💜

Melissa wrote: "So happy to see you're enjoying this series. And believe me, it was torture having to wait a year in between books! Especially with the way she ends them. But, I guess it game me an excuse to the r..."
I can't even imagine having to wait..what a killer!