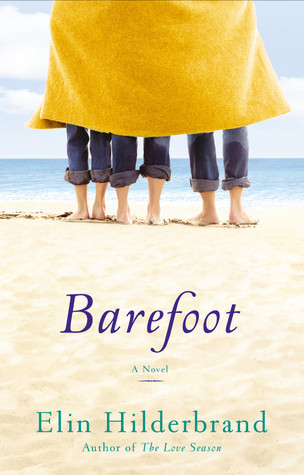 *My review will contain some spoilers*

I could say that Barefoot is my least favorite book by Elin so far. Even the epilogue didn't answer all my questions about the characters' future. Yet, I still enjoyed the story about these three women spending their summer in Nantucket.

The first woman is Victoria Lyndon Stowe. Vicki has been recently diagnosed with lung cancer despite never smoking. She decides to leave her life in Connecticut and take her two young kids, Blaine and Porter, to spend the summer in Nantucket. She plans to get her chemotherapy there. Chemo is never easy and Vicki will have to deal with her feelings about her own mortality.

The second woman is Brenda Lyndon. She's Vicki's younger sister. She had the perfect job in Academia until she met her new Australian student, John Walsh. He's one year older than her but a relationship with him will cost Brenda her beloved job and plenty of legal issues.

The third woman is Melanie Patchen, Vicki's best friend who's escaping with them in order to avoid her own problems. Melanie has tried seven rounds of in-vitro treatments in hopes of getting pregnant without any success. Then, she discovers she's pregnant but she also learns that her husband, Peter, is cheating with a woman at work.

Last but not least, we meet Joshua "Josh" Flynn. A twenty-two-year-old man who crosses paths with them as they get off the plane. By serendipity, they meet a few more times and Josh ends up becoming their nanny for the summer.

As you can see there's enough material for plenty of drama in the making.

So why didn't I love it? Well, a few reasons.

It was hard to like Melanie. She behaved childishly and never really helped Vicki throughout the summer. I also thought she took advantage of Josh's feelings and young age. Worse, her decision at the end made me lose all respect for her. I hated Peter. He had it too easy and I didn't believe his apology. He will cheat again.

In the beginning, I wasn't crazy about Brenda. She could be selfish but she did help her sister. She was there for her. I wished there had been more info about Walsh. Where was he during all those weeks? Why didn't he call her more times? Why didn't he show up to look for her?

Vicki's storyline was the saddest. I felt sorry for her. She was dealing with the unthinkable. Cancer is a scary word and she wasn't sure if she would be there for her two small kids. She had many bad days ahead of her. I love her two kids.

I thought Josh had a rotten deal. He was indispensable to them while they needed him but I thought they didn't tell him how much he meant to them and when it was time to let him go, neither women batted their eyelashes. No offer to stay connected either.

Sorry you didn't enjoy this one more. It was my first ever EH. 💜

Melissa wrote: "Sorry you didn't enjoy this one more. It was my first ever EH. 💜"
I'm sad too. I have read a few in the last couple of months.

I just had this in a pile of books my friend gave me and donated it. Glad I'm not missing much!

❄️✨ Kat ✨❄️ wrote: "I just had this in a pile of books my friend gave me and donated it. Glad I'm not missing much!"
IMO, it was not her best work. I liked all her books but this one was not my cup of tea.

Hope your next is better Sheyla! Great review.

Holly wrote: "Hope your next is better Sheyla! Great review."
Thank you, Holy. I'm doing another audio by her and so far it is great.

Melanie was the only “plot” line I didn’t care for. I completely agree. I wanted someone to shake her or slap her across the face! I thought she was taking advantage of Josh and it just didn’t make sense in my mind. Everything else I enjoyed though

Just discovered you on Goodreads. Well written review. I am audio-reading Barefoot.
Your review is making me think about the characters.
Thanks!

Shirley wrote: "Just discovered you on Goodreads. Well written review. I am audio-reading Barefoot.
Your review is making me think about the characters.
Thanks!"
Thank you, Shirley, I love audiobooks too!!