I had never read a Hammett novel until now and, while I did enjoy it, I would be lying by omission if I did not say I like the movies so much better. I suspect this would be the case, too, with Hammett's other famous novels, in which his snappy detectives are the most enjoyable and memorable aspect of the stories. Hammett's writing is as crisp and clean as fresh-pressed linen, which suits his material. I found the book to be a real page-turner, in many ways. 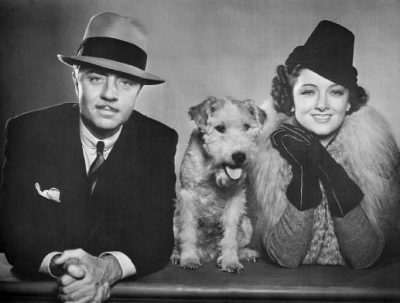 I think whether readers enjoy Hammet's writing must depend on whether they like their hard-boiled detective stories in the form of novels because it's a specific kind of fiction, stylistically. Hammett was apparently the hard-boiled writer par excellence, the one to whom all others were compared. I haven't read many of these types of books before. I read people like Agatha Christie and Dorothy Sayers when I'm in the mood for vintage mysteries. Hammett's writing is high quality but aesthetically minimalist, almost terse at times. The book is nearly all action and dialogue with little to no reflection. I might have liked this more in my youth when I was a big fan of Hemingway and his highly-restrained style. (It's very obvious in reading Hammett that Hemingway was a fan, by the way.) These days, I prefer less focus on action and more quiet reflection and internal dialogue, at least in the books I read. I am different about movies. 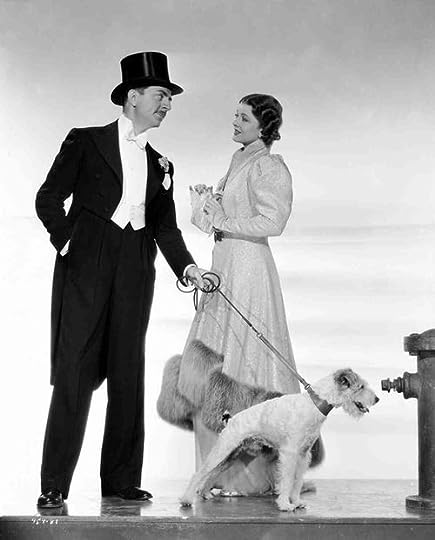 When it comes to films, I am happy with lots of action and snappy dialogue. Some of my favourite movies are Auntie Mame (not the musical but the 1958 one starring Rosalind Russell), Philadelphia Story, My Man Godfrey, and Harvey which are all fast-paced and brimming with witty banter. Besides loving vintage screwball comedies, I just spent a long flight from L.A. to Melbourne binge-watching all the Bogart-and-Bacall movies I could find on the entertainment module, though of course I've already seen them all more than once. They never disappoint but I think it's not that the stories themselves are so gripping. It's the smoke coming off the screen whenever the two of them are together that rivets the attention. And really, can anyone say they prefer reading The Maltese Falcon to watching Bogart play the role of Sam Spade?

William Powell (Nick), Myrna Loy (Nora), and Asta (Skippy) were perfectly cast. Powell and Loy had a playful, sexy chemistry between them that bounces off the screen even now, so many decades on. Both actors have wonderfully expressive faces, flawless delivery, and perfect timing―which is the only kind of timing you can have in comedy of course. 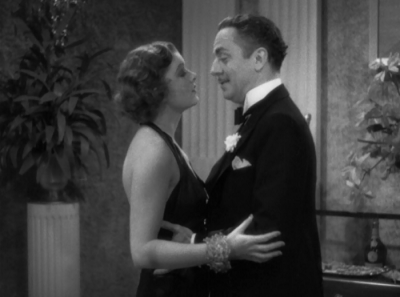 I would have to agree with Paul Bryant's review, too, that most of the witty repartee is in the film, not the book. The surprising (for the time) sensuality is intact in the book, rather like a water gun that sprays every attractive person within a ten-foot radius. Everybody notices everybody else's sex appeal; everyone drinks constantly; no one ever expresses themselves openly and honestly except Asta, the Schnauzer, who cannot help herself. (She morphs into a male wire-haired terrier in the film but just as endearing, because dogs just are, aren't they?)

I have to go back and re-watch the movies now. I have not seen them in years. I had forgot who actually perpetrated the series of crimes, so that did come as a surprise. I could not work it out, since no one ever talks straight in this book. Nick, despite drinking heavily and having to wrestle down women and punch men from time to time, managed to work out all the details in the end. I didn't care for the very last line of the book, but perhaps I am too particular about such things. Last lines, to me, are as important as first ones. The final line of the book is Nora saying, "That may be ... but it's all pretty unsatisfactory," which left me with the feeling that she hadn't quite liked the way Nick had come to his conclusions in this very messy case. As final lines go, I found her response pretty unsatisfactory! 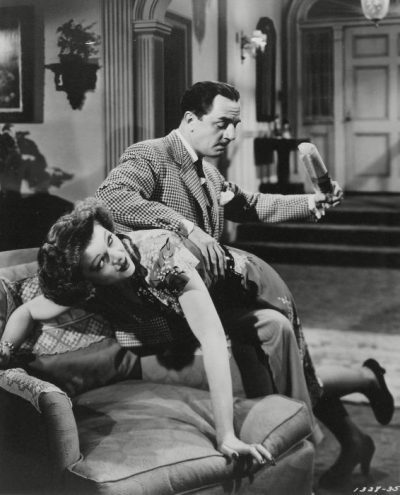 * Nicole Krauss, The History of Love
20 likes · Like ∙ flag

Sign into Goodreads to see if any of your friends have read The Thin Man.
Sign In »

Very, very enjoyable, T.D. You have found a viable cure for long flights, as well.

I have The Maltese Falcon novel in my to-be-read stack and the DVD in my watched-20-times stack. I will read the book soon enough but, like you, I doubt seriously that it will impress me more than Bogart. Still, I love the noir genre.

*if noir can be considered a genre when it's more of a style(?)

Kevin wrote: "I have The Maltese Falcon novel in my to-be-read stack and the DVD in my watched-20-times stack. I will read the book soon enough but, like you, I doubt seriously that it will impress me more than ..."

That's a good question about noir! I love that movie too and I have the book in my TBR stack. :)