I SO cannot wait for this. Her board looks amazing! 😍

Warda wrote: "I SO cannot wait for this. Her board looks amazing! 😍"

Right, love? Ahhh! So excited! But I hope you're having the happiest of reading right now, Warda! 💖xx

We should buddy read this one together, love! Win or lose, at least we will have each other! 💖xx

Melanie wrote: "Gelisvb wrote: "Me too"

We should buddy read this one together, love! Win or lose, at least we will have each other! 💖xx"
:-) sure! 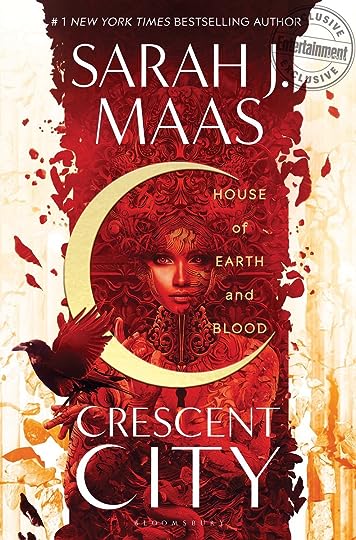 Crescent City is an urban fantasy series for adults, and by the sounds of things it’s going to be a little darker and grittier than anything you’ve seen from Sarah J. Maas before. It will be kicking off with House of Earth and Blood, in which a brutal murder ignites the wild and dangerous city of Lunathion, and it will rest on a fallen angel and a young woman (half-Fae, half-human, and 100% trouble) to solve the case.

There will be magic, danger, and banter a-plenty – and since it’s Sarah J. Maas, it goes without saying that the romance will be off the charts.

Sarah J. Maas - Crescent City
The Tea Room at Queen Victoria Building
Sarah spoke with so much obvious passion and excitement about her new series, she had all the booksellers in attendance hanging on her every word. It was abundantly clear to all of us that the Crescent City series is going to present readers with a complex and enchanting new world full of colourful new characters.

We heard all about Bryce Quinlan, the main character who sounds like she’s going to be just as strong-willed, kickass, and brazen as we have come to expect from all of Sarah J. Maas’ heroines. We also heard some intriguing details about a brooding and mysterious fallen angel, a playboy prince with a loyal crew of whisky-drinking friends, and so many tantalising tidbits about this new world – such as the fact that it will have modern technology!

Bethany and I are both loving this book!

Isabella (The Feminist Bookworm) wrote: "Bethany and I are both loving this book!"

Erin wrote: "Ended up pre-ordering a signed copy from B&N because of Bethany’s vlog 😂"

she is such an angel! 💖xx

Just watched her vlog. We're going to get a bit of smut and Idk, I'm kind of mad? but I saw this coming though.

i cant wait for this book! i'm wondering how it will be since she's known to write smut so im curious how her adult books are going to be

Oh my god! So excited! I'm getting this one as soon as it comes out.