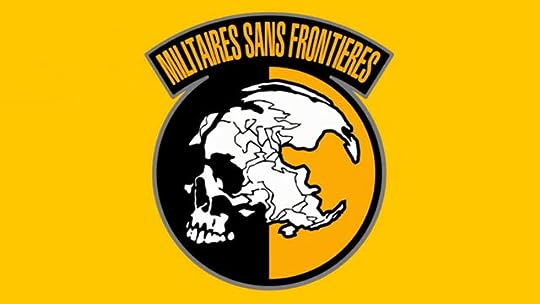 So totally a book of its time: of cinematic Adbustersish rage and paranoia. By 2086, military aid has been fully privatised, making a free market of unilateral political force:

All over the world, men and women still find causes worth killing and dying for. And who are we to argue with them? Have we lived in their circumstances? Have we felt what they feel? No. It is not our place to say if they are right or wrong. At Shorn Conflict Investments, we are concerned with only two things. Will they win? And will it pay?

Morgan's ultra-capitalism is internally coherent, but weighed down by Chomskyan exaggeration and a clumsy Mad Max road-rage system in which people drive FAST and MEAN to get corporate promotion. (Awwwww shit: metaphor!!) Like many a bright-eyed anti-globaliser, Morgan overdoes it; at one point, a senior partner at Shorn erupts into a caricature inhuman plutocrat. I've added numbering to the exec's rant because it is such a dense cluster of Chomskyan muddled good intentions:

Do you really think we can 0) afford to have the developing world develop? You think we could have survived the rise of a modern, articulated Chinese superpower twenty years ago? You think we could manage an Africa full of countries run by intelligent, a) uncorrupt democrats? Or a Latin America run by men like Barranco? Just imagine it for a moment. Whole populations getting 1) educated, and 2) healthy, and 3) secure, and 4) aspirational. 5) Women's right's, for god's sake! We can't afford these things to happen, Chris. Who's going to 6) soak up our subsidised food surplus for us? 7) Who's going to make our shoes and shirts? 8) Who's going to supply us with cheap labour and cheap raw materials? 9) Who's going to buy our arms?"

0) A totally false dichotomy: uncoerced trade is never zero-sum! Also, everyone has an economic interest in the economic development of the world; roughly, the richer my neighbours are, the more they can buy from me, the richer am I.

a) Corruption is terrible for business; it subsumes about one dollar in twenty of the entire world's output. Individually beneficial acts of bribery collectively lead to a ludicrously bad (and anti-capital!) state;

1) Education is good for economies, and thus good for the West (by point 0);

3) suffering war disrupts consumer spending more than anything else (as opposed to the economics of inflicting war, admittedly, but that isn't the plutocrat's point);

4) (a certain limited form of) aspiration is the very heart of a consumer economy;

5) there were huge economic gains from feminism;

6) this is mildly true, but governmental horrors like the CAP give Morgan's rage some urgency;

9) This one is true and horrible.


This economic naivete is balanced by his characteristic virtues: pace, cool uncliched weapons, pro-social rage (here, wifebeaters and Nazis suffer atrocities). In a rarity for SF, Morgan underestimates the rate of tech growth (by 2086): for instance, their drones are much larger and more limited in application than ours are already. (The book is also a good portrait of ordinary marital pain.)

One of his warders offered to let him have some books, but when the promised haul arrived, it consisted of a bare half-dozen battered paperbacks by authors Chris had never heard of. He picked one at random, a luridly violent far-future crime novel about a detective who could exchange bodies at will, but the subject matter was alien to him and his attention drifted: it all seemed very far-fetched.

A few nice meanings in there: Morgan's apparent self-deprecation is actually bragging about his still being in print in a hundred years; Kovacs is just this book's Faulkner character plus genetic mods; thus Faulkner finding the book "alien" is a serious comment on his lack of self-awareness, and explains why the loss of Carla is so fatal to his character (he can't introspect enough to prevent his fall).

Crass and flashy, but psychologically ambitious. I've read everything Morgan has written despite usually disagreeing with him.