it was amazing
Giving Homer's Odyssey five stars would seem a foregone conclusion, right? I mean, it's the second-oldest extant work of Western literature (homeboy Homer also created the first) and it's pretty much the definition of an epic tale. It gave James Joyce the basis for Ulysses (though there's much less wanking in this version) and is something about which more people know a little, even if they don't know its exact provenance. Angry cyclops? Sirens? A decades-long return, hamstrung by gods being utter dickheads? C'mon. 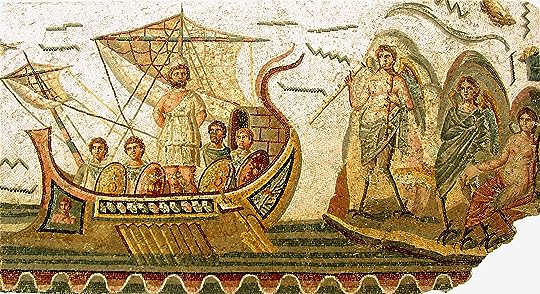 It is, additionally, difficult to review the narrative in terms of stars. It's so fundamental to literature that the story – even though it begins and ends in the middle of things, pretty much, denying the reader a whole lot of resolution and backstory (assuming you haven't read the Iliad first) – is difficult to critique as one would other books. It stands outside most other texts by dint of its shadow. (Which is, naturally, a reason some people give it a wide berth: why read something with so much baggage?) 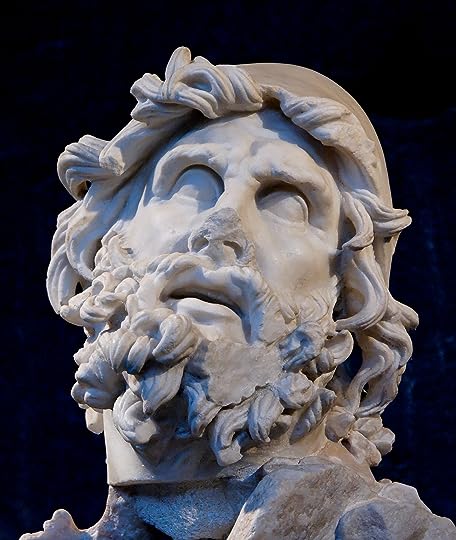 The introduction of the work is worth the price of admission alone: inside it, the translator gives a precis of the historical, geographical and compositional background of both the tale and Homer, gives a potted guide to gods and customs of the period, and introduces her approach to the text and to translation as a whole.

It's 100 pages of brilliance, and isn't mired in so much academic language (or straight untranslated Greek) to put off the neophyte.

Wilson is keen to push against the narrative of her translation as being the first by a woman, despite lots of mainstream coverage claiming it as fact. I can see why – aside from the factual inaccuracy of the claim, it pigeonholes the translator as having written solely from a woman's perspective, which I think is wrong: while her translation addresses the typical translations of women and descriptors of women (see the discussion of women as dogs and the use of the term "bitch" in the introduction) it also sells her short. There's much more going on here than just the translator's gender, no matter how much of a milestone that may be.

I'm put in mind of the Oulipo collective with this translation: Wilson has rendered the text in a regular meter, and has used the same amount of lines as the original. She knows that any translation changes a text, but has opted for some strictures, which to my mind give this rendition a framing that others may lack. 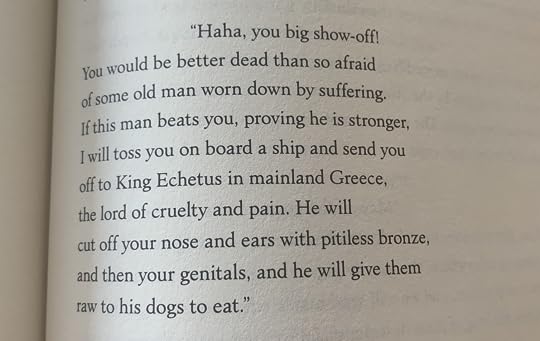 The story is the same as ever – there's not so much you can change, even in translation – but I felt the pulsing heart of the tale much more keenly through Wilson's words. The complication of Odysseus – a fighter, lover, lying jerk and murdering dickbag (though not without reason... mostly) – is conveyed in a way that made me feel as if I was seeing the character anew. Telemachus' weaknesses and doubts, and the misery of Penelope – let's face it, I'd want to avoid those fucking suitors for as long as I could as well – are crystal clear. The story never loses forward motion, and the dissolves from present to past (and back again) don't seem as hokey as they might otherwise. 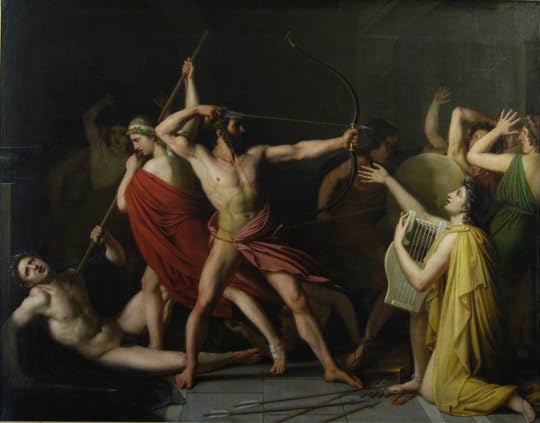 I don't need another translation. This one's the one for me. It lives and breathes, and has inspired me to seek out Wilson's other translations. This is an unbelievable achievement, and one through which the muses really do sing.
2 likes · Like ∙ flag