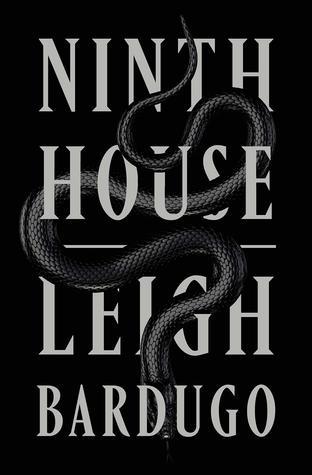 
I have to say, Ninth House is not Six of Crows.

If you have read my review of Six of Crows, you know it's one of my favorite fantasy books EVER.

Was I disappointed that it was not as amazing as Six of Crows? probably yes, but after a slow start, I began to warm up to Galaxy. I was able to enjoy the story of Yale, the secret society houses, the greys all over campus, and Alex's special gift.

Galaxy "Alex" Stern is a survivor. At a young age, she discovered that not everyone saw the world as she did. She understood there were souls that hang out after death. Alex was able to see these ghosts, who are called Greys in this world. She has been attacked by them and only through certain street drugs she was able to forget about them. Her life has been a dark and dangerous road before getting to Yale.

At Yale, she has tried to keep up with the school assignments but she is failing miserably. She's also part of Lethe, the Ninth House. The one with less magic but who is supposed to police the other houses to make sure magic is not being used in the wrong way. Then, a young girl who's not part of Yale is found murdered and Alex is sent to investigate the case. At first, everything points to the boyfriend as the culprit but the more Alex discovers, the more she's sure a house is involved in her death.

The Ninth House has two timelines. One set in Winter and one set in Spring. During winter, we get to know Darlington, the college kid who's teaching Alex all about magic and the other secret societies. During Spring, we learn that Darlington has disappeared and the details of his disappearance come in slowly as the story progresses.

Like I said earlier, I warmed up to Alex and I really loved Darlington. I hope to see him again in the next book.

Denise wrote: "Loved this one, Sheyla! Can't wait to see what you think of it... ✨😎✨"
I liked it. I haven't written my review yet.