Karlita | Tale Out Loud's Reviews > Out Of Play


it was amazing
bookshelves: womens-fiction-chick-lit

Gillian Campbell, married for fifteen years, felt her life was just like a passing day—an everyday routine which includes a heated discussion with her husband about his ridiculous hobby of "live-action role playing or larping". With their current roommate-like situation rather than intimate lovers who almost never been like a married couple, Gillian decided to see a therapist to help her save her marriage tainted by past memories and pain, suppressed but never forgotten.

Ralph Campbell always thought that Gillian never supported him especially on anything that has something to do with his weird hobby. He felt rejected. The only thing Gillian has done whenever there was a chance of interaction between them was to complain about how embarrassing and childish his own version of enjoyment was.

When Gillian's therapist suggested that she should be open on trying something that Ralph's love to do, she decided to at least be interested until she gave in and joined a weekend of larping as an NPC (non-player character) volunteer, only because she wanted to prove Ralph how unreasonable his priorities were.

There she realized that it wasn't bad after all. But a lot of unspoken emotions surfaced without warning. Could this be the way for them to finally get connected again and get the splinter out of their relationship or would it just endlessly outsize the gap between them?

The issues on both characters were real even if most of the story was set in the fantasy world of larping. I understand why Gillian and Ralph found something to do with their own lives separately. They wanted to fill the void missing in their relationship—the connection that was once there and the visibility of spark that's pouring out excessively before everything happened.

I was rooting for Gillian because I knew that she just wanted Ralph's attention and to spend quality time with him. But as I dive into the story, I was able to know Ralph better. He used larping as his only way of dealing the REAL problem—an escape, an alternate reality or parallel universe that stroked more appealing than the constant nagging of his wife or the awkward silences they usually have.

It felt like they didn't even know each other. Gillian's trust was sparse. Ralph was becoming more distant.

I love how the writing quality was simple yet gave a credible and impressive structure to the story with an on-point plot, genuine characters and an underlying topic about friendship and parenting.

Joy Norstrom was not afraid to stress out how marriage could be imperfect—a strong, positive message about the real battle you face because, in any kind of relationship, it's always going to be a two-way process where you have to exercise patience, trust and understanding. She was able to point the flaws without romanticizing the truth.

Out of Play is unpretentious, convincing and honest. A story which tells you that life is not always going to be great. Sometimes it gets unhappy, frustrating, vexatious but you have to hope against all odds and preserve an unbreakable bond of 'for richer and for poorer, till death do as part'.

***Thank you to Joy Norstrom for providing me a copy of this book in exchange for a fair and honest review! 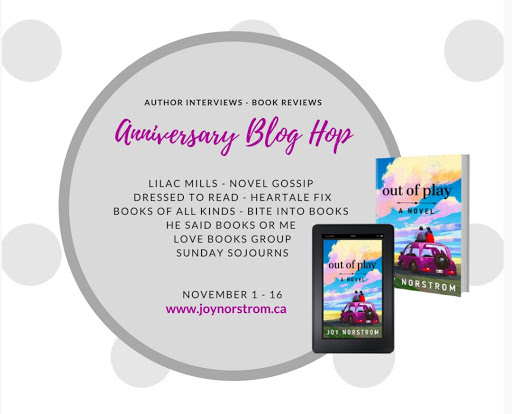 Joy Norstrom is a Canadian coffee-a-holic. She lives in Calgary, Alberta and enjoys hiking with her family, wine with friends and reading late into the wee hours when she should be sleeping.

She is also a mother and a social worker. When she's not parenting, championing inclusion, or getting lost in a good read, she can generally be found in conversation. A people-person by nature, she looks forward to meeting with book clubs both in person and online.
Website | Facebook | Twitter | Instagram

Sign into Goodreads to see if any of your friends have read Out Of Play.
Sign In »

Great review Karlita. Thank you so much for the recommendation x

Dash fan wrote: "Great review Karlita. Thank you so much for the recommendation x"

Great review. Thanks for recommending this book.

Terrific review Karlita :) & thanks for introducing me to this new Canadian author!

Thank you for the Rec it sounds good

Scarlett wrote: "Great review. Thanks for recommending this book."

Icewineanne wrote: "Terrific review Karlita :) & thanks for introducing me to this new Canadian author!"

Yesss! One of my favorite debut author I just recently met this year. And this book is relatable. ;)