(Full disclosure: I received a free electronic ARC for review through Edelweiss.)

In the editor's note, Hazel Newlevant explains the genesis of Comics for Choice: Illustrated Abortion Stories, History and Politics:

Comics for Choice was sparked by my outrage at the clinic closures and suffocating restrictions on abortion rights in states like Texas. It is not enough for abortion to remain technically legal; it is a moral imperative for abortion care to be accessible to all who need and want it. The right to abortion is the right to bodily autonomy, and to determine one's own life path. When our 45th president was elected, and the future of abortion rights seemed more uncertain than ever, I couldn't wait any longer. The very next morning, my co-editors and I set the wheels in motion to create the book you now read.

The result is, sadly, both relevant and timely; in the words of badass old broads everywhere, "I can't believe I still have to protest this fucking shit." 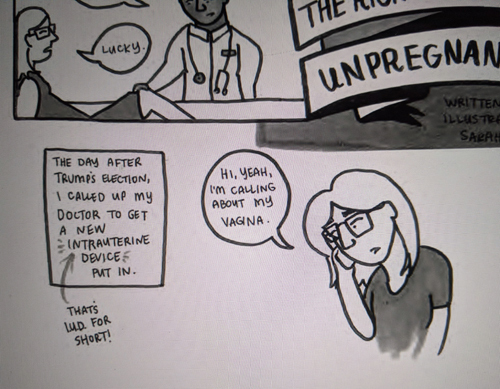 The anthology brings together more than sixty contributors - including women (and some trans and nonbinary folks) who have had abortions; women who were born after their mothers chose to terminate a previous pregnancy; reproductive rights advocates; clinic escorts; abortion doulas; and other feminist activists - to share their stories about abortion. Comics for Choice aims to destigmatize abortion, birth control, and family planning (but mostly abortion) by sharing personal stories from those who have undergone the procedure, as well as historical context, scientific information, and (in an especially touching piece by Jennifer Camper and Katie Fricas) a memorial to those murdered by anti-choice terrorists in the United States.

Like many anthologies, collection is somewhat uneven. Unlike most anthologies, the breadth of voices is also the book's greatest advantage: if nothing else, Comics for Choice underscores the fact that abortion cuts across myriad lines - race, class, politics, sexuality, even gender. One in four women will undergo an abortion at least once in her lifetime; countless others will be forced to carry an unwanted pregnancy to term due to unequal access. Comics for Choice gives people from divergent backgrounds the chance to share their stories, sometimes pairing artists with regular folks to better convey their experiences. Representation matters, and the editors have taken care to make this mantra the backbone of Comics for Choice.

As for my favorites, one piece that stands out - and will probably haunt my dreams throughout the Trump presidency - would have to be "Horror Stories" (as in "Do It Yourself Abortion Horror Stories") by Jennifer Camper. Simple yet horrifyingly effective, the one-page comic portrays fourteen methods of DIY abortion with stark and chilling brevity. Dr. Cynthia Greenlee and Jaz Malone's portrait of Dorothy Brown, Tennessee's fist black woman legislator ("They Called Her Dr. D"), follows "Horror Stories" and provides a nice, fist-pumping counterpoint.

Mick Moran shares her experiences as an abortion doula in "Bearing Witness," which had me convinced that abortion doulas must make the best, most empathetic friends ever. The last comic, Vreni's "Nothing Feels Real (an abortion diary)" is also one of the most powerful contributions, offering an intimate look at funding, undergoing, and recovering from a surgical abortion.

Perhaps the most surprising piece, for me, was "Abortion Trials." Based on transcripts of abortion trials from the post-WWII era, Rickie Solinger and Rachael Morrill explore how women were routinely slut-shamed and demonized - "thoroughly degraded and humiliated" - often for public entertainment, and when they were not necessarily the ones on trial. In many cases, it was their doctor's own defense attorney dishing out the abuse. 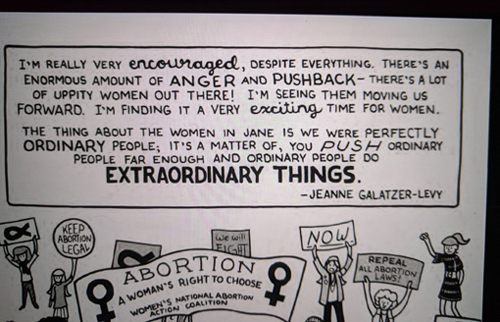 Comics for Choice isn't always an easy read, but it's a necessary one - and a much-needed addition to the swell of women's voices that continues to rise into 2017 and beyond.

Sign into Goodreads to see if any of your friends have read Comics for Choice.
Sign In »