' “Just hold me until we go to sleep.”
“I’ll hold you forever,” he mumbled into her hair.' 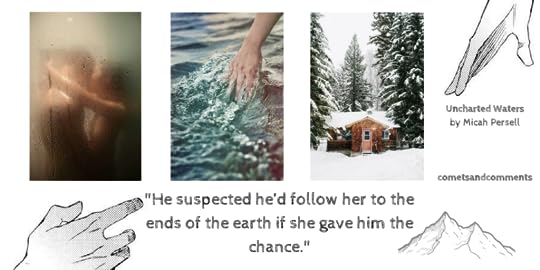 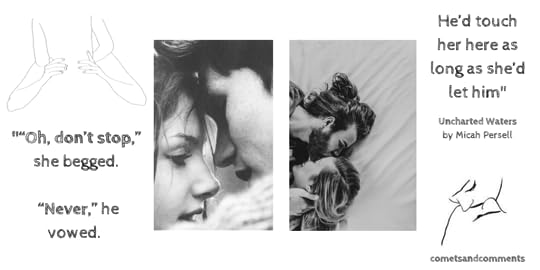 This was such an unexpectedly hot and adorable read... I found myself laughing, tearing up, fanning myself, and smiling all in the span of minutes! The atmosphere was refreshing in its uniqueness and I enjoyed experiencing the tone that this novel set out. I loved every second of it and Ms. Micah Persell is officially on my radar.

"Eugene Anderson had written ignotumque aquas. She frowned. Latin of course, but it wasn’t any scientific term she was familiar with. Aquas was water, but ignotumque? Unfound? No, uncharted. Dr. Anderson had signed this memo with the phrase “uncharted waters.”

I love snowbound stories. I love stories with a strong female role. I love science.
Uncharted Waters pulled through completely.

It took such a unique take with its romance - I actually learned from this book. Water systems...Who knew?!

"Uncharted waters would usually be a nautical term, but she knew that wasn’t what he meant here. His system would take clean water to uncharted locations. Exactly where it was needed"

It was quite a quick read, the pacing was incredibly set and it all but begged me to turn the pages. The only reason this was not a all star rating was due to the ending. The end set of chapters felt rushed to me, and after such a robust story was created from beginning to middle, it felt almost unlawful for the conclusion to be set in a way that made me wonder if the author had a preset amount of pages/chapters that she had to hit...

But still, from start to finish. I got emotional punches, I got swoon-worthy lines, and mostly I got James Anderson. My heart has been stolen ladies and gentlemen. Ripped from my chest and put in front of Mr. Anderson on a silver platter so that he may do with it as he pleases.


The Writing
As I mentioned, this was my first Micah Persell novel. However, it definitely won't be my last. This is about 80% due to her style of writing and her written prose.

Many passages in the books we read go hidden. Sure, we read the words and then carry on reading the words beneath them. Very rarely, do we read whats underneath the ink.

"She smelled of flowers and rain. A meadow beneath a storm. It was intoxicating, and before he could even ponder why he would think something so flighty, he pulled in lungfuls of it until he swayed slightly. His eyes sprang open, and his equilibrium balanced."

There was definitely some of those beautiful hidden passages in this book.

Although the imagery wasn't written in a more sensical literary manner, it was built through emotions. We saw the characters emotions . It was a romance novel, not a classic piece of medieval literature, and the fact that we could build the atmosphere through both James' and Bethany's feelings is a whole other something.

The humor was also very tongue-in-cheek, and I did find myself grinning with some passages. The first chapter even got me going with an ear to ear smirk.

“You can kiss my crass"

"The blanket, which he used against his own skin regularly, felt suddenly far too coarse for hers, but it was the warmest he had."

I'm going to reiterate how important it is for authors to make the reader feel something towards their characters. Be it, hate, love, desire, longing, intimidation etc. etc. Without having any link to the fiction itself, the story becomes null and void in the readers eyes.

James completely made me feel. The whole good guy role usually does not work for me... oh wait, I can't really say that anymore. ;)

This was a cute novel, one that you would pick up because your tbr list is scaring you, and you couldn't care less. (hint hint) With that, it delivered - it isn't going to explain the meaning of life or show you a greta moral compass because it wasn't made for that. It's mission objective was to make you tingly and giddy. To implement butterflies in your belly. In that sense, it delivered

"What he looked like as he touched her, which just so happened to be an expression similar to “I’m the luckiest man alive.”

“She smelled of flowers and rain. A meadow beneath a storm. It was intoxicating, and before he could even ponder why he would think something so flighty, he pulled in lungfuls of it until he swayed slightly. His eyes sprang open, and his equilibrium balanced.”
― Micah Persell, Uncharted Waters
tags: love
3 likes

This cover though....where's a fan when you need one?

Jina♥ wrote: "This cover though....where's a fan when you need one?"