Read the full review, including memorable quotes from the book, at GraveTells: http://bit.ly/SurrenderTheDark (live on Friday, August 18, 2017) 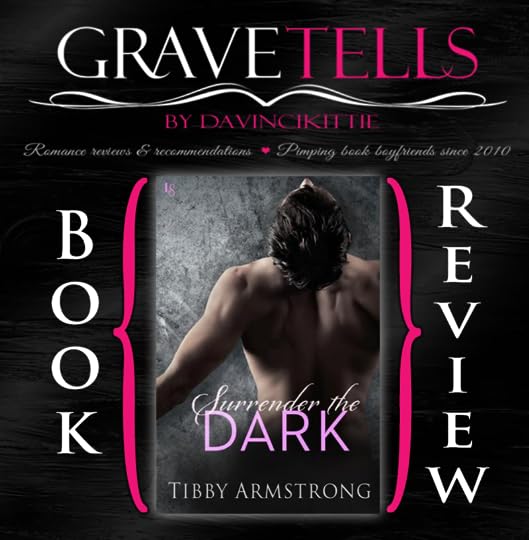 When I first choose this book for review, it stood out because gay romance is less prevalent in paranormal (especially vampire stories) than in contemporary romance. What I didn't count on was how striking the story itself would turn out to be. Tzadkiel and Benjamin are literally mortal enemies, not just by birth but by circumstance as well—they have tried before, and try during the story, to kill each other for real. The opening chapter paints a violent scene of torture, disfiguration, loss, and escape that defines the rest of both main characters' lives. And when the tables finally turn, Tzadkiel doesn't soften or relent in his crusade to save his people, no matter how attracted he and Benjamin are to one another.

Both characters are strong, not just physically, but in spirit and determination. And they are both handicapped in some way, leaving them vulnerable to each other's physical attacks and verbal barbs.

These two have some of the most virile hate-fuck chemistry I've ever read, and the build-up is exquisite. Tzadkiel gets off on power and violence—particularly against this hunter whose family decimated his own and nearly destroyed his entire world—and Ben thrives sexually on feeling shamed and dominated. He thrills in intimate pain and cruelty, and it is all tied up in this vampire king with whom his life has become indelibly intertwined.

Because neither trusts the other, which necessitates spending every moment together, the constant exposure humanizes them and softens their ingrained, decades-old animosity. It's brilliant, really. A story beautifully crafted.

This story is so much more than I expected. It walks the line between paranormal romance and urban fantasy. The ending was heart-poundingly, breath-takingly beautiful—the perfect tribute to everything these characters sacrificed both throughout their lives and in the course of this story. The emotional journey of the characters is intimately and lovingly spun, with care and elegance and heart. And the Author's Note at the end sums up how I felt when I finished reading the epilogue.

Sign into Goodreads to see if any of your friends have read Surrender the Dark.
Sign In »