David Malouf's Ransom is an intense and often deeply poetic retelling of books 22-24 of the Iliad that in the epic poem recount King Priam's journey to the Greek military camp to ransom Hector's body from Achilles.

I clearly remember reading this episode in Homer's poem in school and being completely moved by it and Malouf's re-imagining didn't fail to provoke in me the same feeling of deep sadness at the encounter of two men equally stunned by a profound and unutterable grief.

It's very easy to see in the beautifully flowing prose of the novel Malouf's talent as a poet - the lines are often characterised by a deep musicality and are broken and rhythmic.

The book is structured around five chapters of varying lengths alternatively focusing on Achilles and Priam. My absolute preference would go to Chapter I - where we observe Achilles' grief turn into his savage hatred for Hector's body - and to Chapter IV in which the fateful meeting takes place and the two men, divided by war and both painfully aware of their approaching deaths, manage to share a moment of peaceful humanity. The paragraph at the end of Chapter IV gave me shivers for its simplicity and stillness:

'Call on me, Priam,' he says lightly, 'when the walls of Troy are falling around you, and I will come to your aid.'
It is their moment of parting.
Priam pauses, and the cruelty of the answer that comes to his lips surprises him.
'And if, when I call, you are already among the shades?'
Achilles feels a chill pass through him. It is cold out here.
'Then alas for you, Priam, I will not come.'
It is, Achilles knows, a joke of the kind the gods delight in, who joke darkly. Smiling in the foreknowledge of what they have already seen, both of them, he lifts his hand, and on a word from the driver the cart jolts on out of the camp.

I recommend this novel to dwell for a while in its beautifully-knit prose and if you want to relive one of the most heartbreaking episodes of ancient literature. 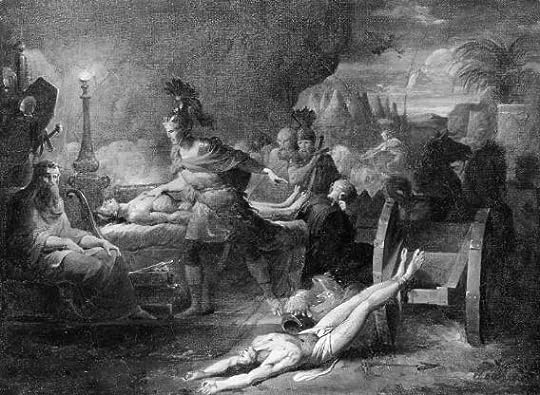 Thank you very much, Ilse! It's a beautiful little novel. Very moving.