may ➹'s Reviews > Isle of Blood and Stone

After reading the first few chapters of this, I was really sure that it would end up to be your “average”, meh fantasy, with nothing horrible but nothing outstanding either. But I was surprised to find that it was actually even better than I thought!

Let me be real here: This has a lot of flaws. It is definitely not a perfect book. But the thing is:
IT WAS SO ENTERTAINING.

At first it was slow and kind of boring, and I couldn’t really connect to the characters. But then something changed and I was so much more invested—for at least half of the book, I could feel my adrenaline pumping and I was ALWAYS on edge. 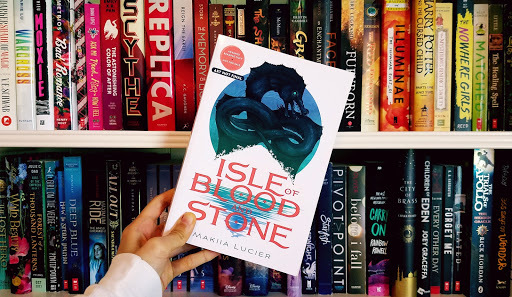 Isle of Blood and Stone follows the story of a young man named Elias, whose friends discover maps that could have possible clues as to how two princes and his father disappeared from the kingdom of del Mar eighteen years ago.

Elias is an interesting character. To be quite honest, he was kind of bland?? And forgettable??? I’d say that the side characters have more depth and personality to them, and HE’S the main character. Regardless, I still enjoyed reading from his perspective and seeing where the story would go.

Speaking of the side characters: I LOVE THEM. Mercedes (Elias’s love interest) is portrayed as a strong character, and she’s really independent in a way that doesn’t rub on me wrong, like it often does with other “strong” YA heroines. Reyna, a young nine-year-old girl who is involved a lot in their story, is my favorite character out of the book; she’s so sweet and curious and stands strong in her beliefs!

I also am VERY suspicious about the fact that this book… doesn’t seem diverse?? I don’t remember any sort of description that would’ve shown that there were people of color in the main cast—or in anyone they met at all tbh—and definitely not anything that pointed to people being queer, neurodivergent, disabled, or from any other minority group. Of course, it may be changed in the final publication / I may have missed something, but… that was suspicious.

My other biggest problem was that the story started out really slow and almost boring in the first 100 pages. And those were not fun 100 pages. But then suddenly, the stakes were raised and there was a whole new atmosphere?? I was genuinely excited and nervous to see where it would all go.

Literally for the whole last half of the book, I was always on edge and could feel my heart pounding, just so ANXIOUS about what would happen next. (I mean it was also 2 in the morning and I was paranoid.) But it was just so engaging after those first 100 pages. And besides one that I guessed, there were so many reveals of different kinds that made it so much more mysterious and shocking.

This book also involves a LOT of maps. Unfortunately for me, my ARC didn’t have a map so I was a little confused with all the place names at first, but I got the hang of it. I think that the worldbuliding was pretty well done! My biggest issue with fantasy novels is that there is just SO. MUCH. INFO DUMPING. about the world, and this book had just the right balance between too much info and too little.

This story is, honestly? a “whodunit” kind of murder mystery, but mixed with fantasy elements and also BIG EMPHASIS on family and found family. And I thought that whole mix made for a really and really entertaining book, despite it falling a little short in character development and pacing!

Thank you to Houghton Mifflin Harcourt for the review copy in exchange for an honest review! This did not affect my opinions in any way.

Sign into Goodreads to see if any of your friends have read Isle of Blood and Stone.
Sign In »

i'm so happy you loved this!! (remember whe you were like "uh i don't really care about this ARC lmao)

thank you so much alex!!!

ilsa ➹ wrote: "i'm so happy you loved this!! (remember whe you were like "uh i don't really care about this ARC lmao)"

i genuinely hate you
but no, this is an arc publishing this tuesday so i have to get a review up by then :)

can't wait for the official review, love! <3 Glad you enjoyed it xoxo