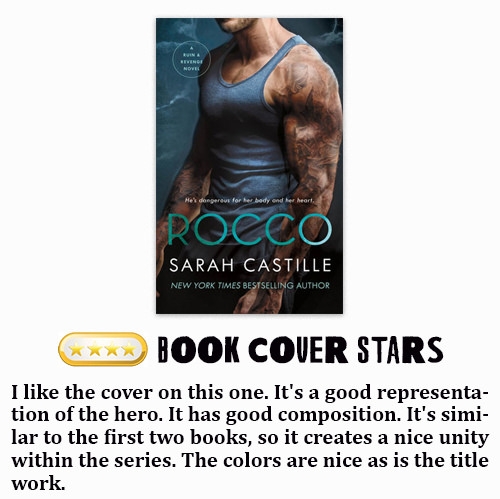 I LOVED book one in this series (NICO) but was disappointed in book two (LUCA) so this book was a make it or break it book for me. Well, let me just say this author not only made it, she blew it out of the water and ROCCO has now moved up to the top as my favorite book of this series. From beginning to end this was a total pleasure to read.

I found this one to be fantastically well written. It was a fairly long book, but It held my attention all the way through. The plot was engaging. Surprisingly, this wasn't very angsty. I thought for sure with Rocco's and Grace's history there would have been a lot more pushing away on both their parts, but nope, they pretty much get past their issues quite quickly.  I wasn't in the mood for a book filled with the heroine being bitchy and pushing the hero away, so Eve was a happy camper. There wasn't any OW/OM drama. Both had been with other people in their six years apart. The sex scenes were both smokin' hot and plentiful. There was an excellent array of secondary characters. Nico and Mia and Luca and Gabrielle featured in this one quite a lot. Along with a bunch of other VERY intriguing people. I hope very much we will see Mike get a HEA along with Olivia and Tom. Maybe even Ethan. The cast of secondary characters in this one really added so much to the story.

Both main characters were awesome. I can't think of a single thing I didn't like about either of them. Rocco was sexy as f-ck. He was alpha. He was badass. He was protective. He was tormented. His history will make you cry and I am dying to find out who his real family is. Grace had the potential to be a very annoying heroine. I figured she would be this judgy, bitter and angry woman who couldn't get over having her heart broken. She wasn't that AT ALL. Oh sure at the beginning she was a little prickly, but even then it was portraid in such a manner you couldn't help loving her feistiness. She was sassy. She was smart. She was strong. She was funny. She was sweet, and she embraced Rocco for everything that he was. She was actually one the best written heroines I have read this year. Last, it was all wrapped up in a sweet epilogue that ended things perfectly. I am not sure whose book is up next (I am hoping Mike's) but whoever it is I will stand in line anxiously awaiting its release. This one gets two HUGE thumbs up from yours truly.

Sounds great. I don’t think I’ve read the others yet. I need to do that.

Janie wrote: "Sounds great. I don’t think I’ve read the others yet. I need to do that."

Nico and this one are the two best. I didn't love Luca's book. A bit too much OW stuff in his.