I got some wonderful stuff in the mail yesterday (7/3/17) and I love them! I love getting stuff from the pub etc. 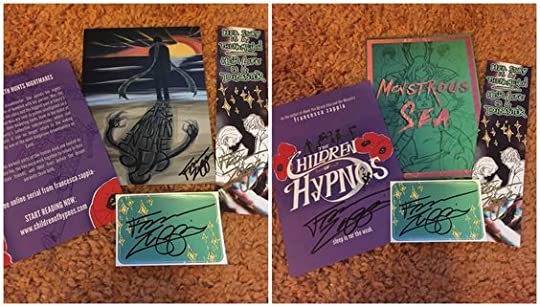 I loved this book so very much! 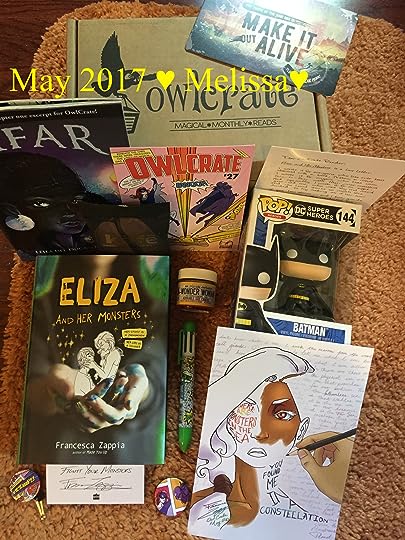 I love the book has drawings and stories all through-out the book. They are so awesome! 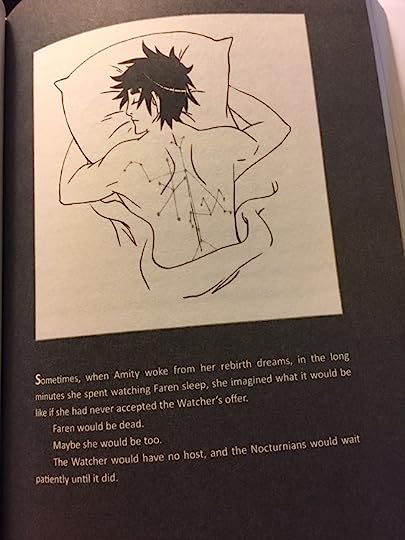 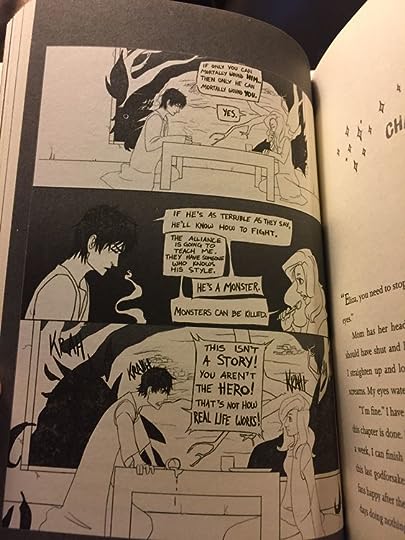 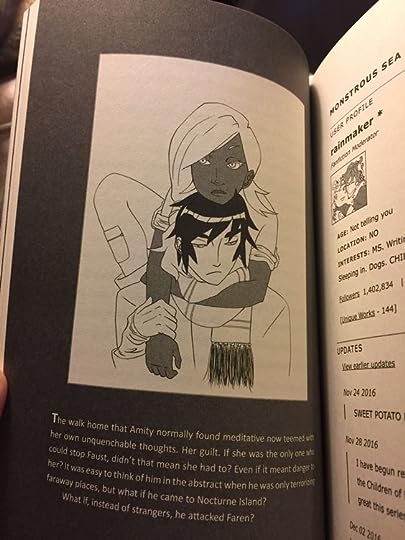 I love Eliza. She's quiet, wants to be left alone in her online world where she writes her webcomic: Monstrous Sea. She has two wonderful friends online that have helped her with her business. There is Max who runs security on the trolls (we need him for GR) and Emmy who set up the merch for the comic and sales for the comic, etc. Eliza makes enough money to live off of and put her way through college. She famous and she's anonymous.

I do have friends. Maybe they live hundreds of miles away from me, and maybe I can only talk to them through a screen, but they're still my friends. They don't just hold Monstrous Sea together. They hold me together.

Max and Emmy are the reason any of this exists.

Eliza doesn't talk to people at school. Some people are actually afraid of her and she's happy with this because all she want's is to draw out her next parts for the comic during school. Then when she gets home she puts the drawings and stuff on her photoshop to get it complete and uploads them.

God, I wish I could draw and do something so freaking cool like that. Anyhoo . . .

Eliza isn't really close to her parents. They are always trying to get her to do sports and random stuff she has no interest in. They think her comic is a hobby, she never told them how famous or how much money she makes. They think she makes a little bit of money and just let her do it. I do wish that Eliza would have been up front with them and I do wish that her parents would have taken the time to actually go online and read her comic and see how famous she actually was, but none of this happened. And later on, it bites them all in the butt.

Eliza has two brothers: Church and Sully. She doesn't do much with them because they are into sports etc. She has no idea that they follow her comic and so do their friends. And when Church takes up for Eliza when her parent do something extremely stupid, I was so proud. I mean so proud. He put them in their place once and for all because sometimes parents aren't always right, even if they mean well.

I must also mention that I'm in love with Davy, their Great Pyrenees =)

Eliza meets the new kid at school, Wallace. He starts writing notes to her because he doesn't really like to talk. It's really super cute and he's freaking hot. Just sayin'. It turns out that he writes fanfiction for Eliza's comic!

They become close and start going out which is way beyond anything Eliza has ever done in her life! I think they are wonderful together but she never tells him that she is LadyConstellation and the creator of Monstrous Sea. I wanted to scream! He finds out when every one else does when her parents do something stupid. Poor Emmy and Max have to try to fight and keep everyone off Eliza's back and even Church cusses people to leave her alone. Eliza has a breakdown after her cover is blown and doesn't even want to finish her comic. She has to see a counselor and take anxiety meds, it's all just one big mess. If her parents would have just butted out and if Eliza would have just told them how big she is. . . so many things.

Wallace gets mad at her obviously. I mean she should have told him but it is what it is. He gets even more mad at her when she decides she's not going to finish the comic because he has an offer to get his fan fiction published. It could make his dreams come true as well. I find it strange that people can make money off other people's work but I guess that's life.

Some drastic things make everything come to a close and the world to be complete again. Eliza is even closer to her family and things are awesome with Wallace. It was a happy ending for all involved.

I really wish this book would continue or maybe a little novella of what happens with everyone later on.

This book was so awesome to me and it meant a lot on so many levels. It's a really great thing when a book can make you feel so good. Fin

Sign into Goodreads to see if any of your friends have read Eliza and Her Monsters.
Sign In »

I just got mine in the mail yesterday!

Wow! This is like another birthday gift, Melissa! Very nice. :)

Every month with Owlcrate is like a bday :-D

Yay! Looking forward read on your full review about it, Mel! 💗 I really like Francesca Zappia

Thank you so much, Donna. It most certainly was great =) ♥

Just read read your full review and love it, Mel! I'm definitely going to read this once it comes out. 😍

Great review! I wasn't so fond of Zappia's Made You Up but this one looks interesting enough to give a chance. Glad it was a 5* read for you!

Thank you =) I loved both books =) This one just made my day though, I love it so much. I hope you like it when you get to it =)

Thank you so much, Choko =) I was feeling really down and you cheered me up a little ♥

Great review, Melissa! Glad you enjoyed it so much :)

Thank you so much, Lucia =)

I had never even heard of this until today, but it sounds so freakin' cute! Amazing review, Mel! And amazing pictures! 💗xo

Thank you so much sweetheart =) xo♥

I just have to ask... Did Batman approve this book? LOL. Very nice review and the book looks interesting, I'm glad you enjoyed!

Fantastic review. I love the concept and after your review, well I just have to read it! :o)

My sister got me this owlcrate for my birthday, so I am looking forward to reading this and then your review. So happy you loved it!

You're most welcome. *toes crossed* =)

Got my Owl Crate this morning. The book looks good.

Awesome! I hope you enjoy =)

What an interesting and great read, Mel.
Lol on There is Max who runs security on the trolls (we need him for GR)
Do you know his whereabouts? :D

I wish I did because I would hire him on the spot. Well, make rich ass Amazon pay for him since they own goodreads and most stores now!

This book made me all happy inside =) ❤️

Oh wow, I didn't know that. So Amazon owns GRs...hmmmm...interesting.

I sometimes live under a rock. :)

I live under the rock, the next lane over =)

The art is so beautiful! Nice review, my friend! Happy Forth of July 🙂🙂🙂

It sure is and I was lucky to get some extra stuff for signing up for something. Lol, my brain. Happy 4th hon =) xo