I grabbed this Pride and Prejudice fanfic as a Kindle freebie. It's a collection of two novellas and a short novel, all based around alternative storylines in the P&P world:

* What if Darcy had gotten up the nerve to actually have a heart to heart talk with Lizzy in the library at Netherfield? (Worth the price of admission just to read about Darcy putting Caroline Bingley in an armlock when she tried to put the moves on him, lol! So out of place for Darcy's character and his time, but it made me laugh.)

* What if Elizabeth saw Wickham trying to force Georgiana Darcy to go to Gretna Green and marry him, so she wrote a quick letter to Darcy, saving Georgiana but compromising herself, so Darcy marries her in a quick marriage of convenience to save her reputation? (This is long before they met in the actual book.) The weird alternative universe thing here is that sweet, quiet Georgiana is a spoiled brat. Elizabeth tries to take her in hand, but meets with some resistance from Darcy, not to mention Georgiana. Bonus plot device: slaveholding concerns, which was quite interesting.

* What if Elizabeth and Darcy met when she befriended Georgiana on a family stay in the seaside town of Ramsgate, when Georgiana catches Wickham kissing Mrs. Younge and goes running to Elizabeth to stay with her until the cavalry (her brother) arrives? More freaky alternative universe things happen, as other characters get involved with people who are not the ones they marry in the actual book.

It's not too bad for fan fiction, if you don't mind:
- some characters who are totally reimagined from their personalities in the original book. Mr Bennet, for example, gets a hard knock in the second story, as well as Georgiana.
- the Regency setting being thin, with lots of anachronisms that will drive Regency sticklers nuts.
- Elizabeth and Darcy being all sappy about each other very quickly, in every story (even the arranged marriage one), and both are Practically Perfect in Every Way®. For example, Darcy admits that he lied when he said Elizabeth wasn't handsome enough to tempt him; really he thinks she's lovely and has wanted her bad from pretty much the very start. 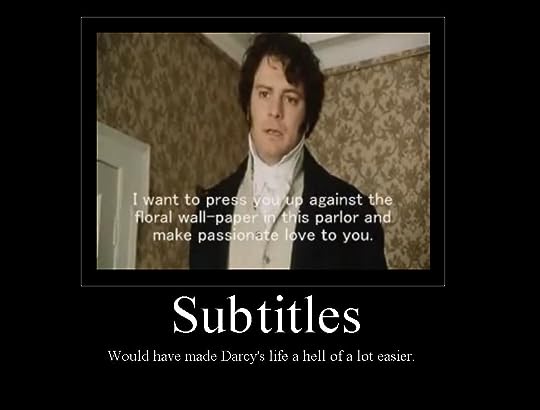 If you're just looking for a light, sweet romantic read to while away some time, like I was, and don't plan to think about it too hard, then it's fine and even enjoyable.
34 likes · Like ∙ flag

Sign into Goodreads to see if any of your friends have read One Love Two Hearts Three Stories.
Sign In »

*rushes of to buy it on his kindle*

Maks(DaAnnoyingOne) wrote: "*rushes of to buy it on his kindle*"

I am sheep. Following the herd. Buying it now.

I'm starting this, having a bad book run. Like, 4 plunkers in a row!
Mr Darcy, take me away.

Well, I hope this helps your book slump, but I'm a little worried. You did notice that I rated it 3 stars, not 4 or 5, right? It's cute but mostly fluffy.