What was this even supposed to be?
I'm guessing someone actually read the script for this and said, OK! That sounds reasonable!, but I'm finding it hard to imagine why. I just don't even... what was this?!
There are so many cockamamie storylines going on in New Romancer that it felt like trying to read a bowl of alphabet soup. Except instead of letters, there's little noodles made of madness floating around!
MADNESS, I SAY! 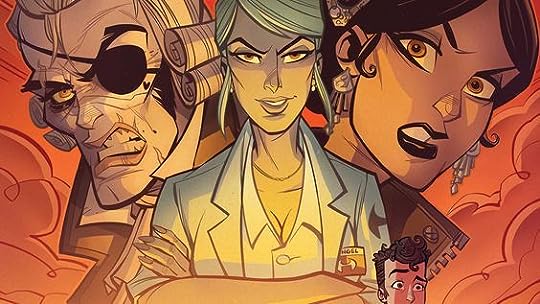 Lord Byron's consciousness has somehow been downloaded into an A.I. body by a 20something named Lexi, who during her lonely teenage years fell in love with his poems. <--That does NOT even scratch the surface of the insanity that is New Romancer.
But I can't really explain all the nonsense that happens without giving spoilers, so:
SPOILERS AHEAD! 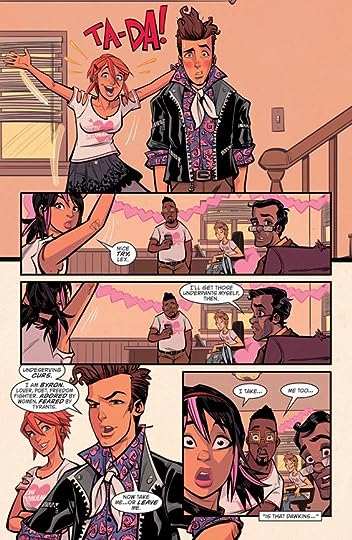 I'm not a fan of poetry. <--shocking, I know!
And I'm not a big history buff. I mean, I'm aware of the basics, but if you asked me who was a big deal in the early 1800's, I'd be really hard-pressed to give you anything other than a blank stare.
All the space in my brain that would normally hold this sort of information has already been allocated for stories about people who get bit by radioactive spiders.
Sorry, my kindhearted and intelligent friends, I got no room for shit that rhymes.
What I'm trying to say is that if you're going to write a story about bringing a historical figure back from the dead, especially one who writes poetry? Well, let's just say it had better be hella good to keep my interest.
This? Not good. Not good at all. 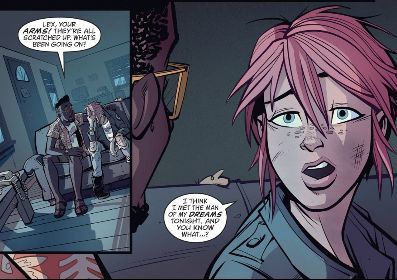 Alright. So this girl works for a smalltime online dating site/app, and they've hired her to come up with a program that matches people up (somehow?) by using a bunch of dead romance/poetry writers...ideas? Or something. It's harebrained!
She's stolen some sort of tech (not explained very well) from her ex-employer (they are EVIL, btw), and has used it to (again, not explained how) connect to/reanimate/clone the consciousness of her crush, Lord Byron.
And for some reason, others, including Giacomo Casanova & Mati Hari.
LIGHTNING STRIKES! And all these people come to life. Because?
BECAUSE! 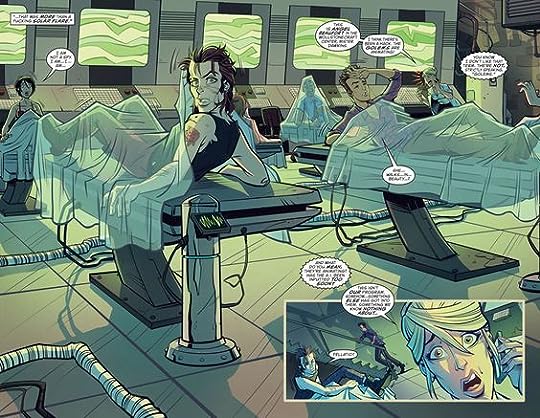 Now, Casanova is evidently a Jokeresque serial killer who's out to get both Byron and Lexi.
Oh, I forgot to mention that Casanova steals life forces like a vampire. Just...sucks it right out of your mouth! And he has darts (love darts) that make you his slave. Yup. His minions shoot people with f-ed up love darts. 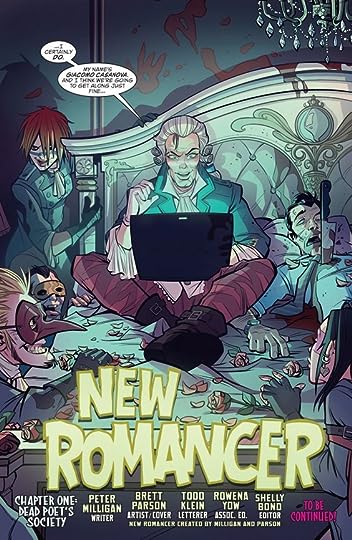 Mati Hari is a bit unhinged as well, and proceeds to kidnap Lexi's dad in order to force Lexi to bring her dead lover back to life. But then she falls for Daddy after she sucks cactus poison from his chubby titty.
Whut?!
They get married after her dad gets his prison sentence overturned with new evidence. Did I forget to mention her dad broke out of prison to tell Lexi that he and her mother had fucked with her in the embryonic stage so she'd be super smart? Well, he did.
Plus, you know...her dad experimented on her.
Like loving parents do.
But, hey, it looks like everyone is getting a happy ending! 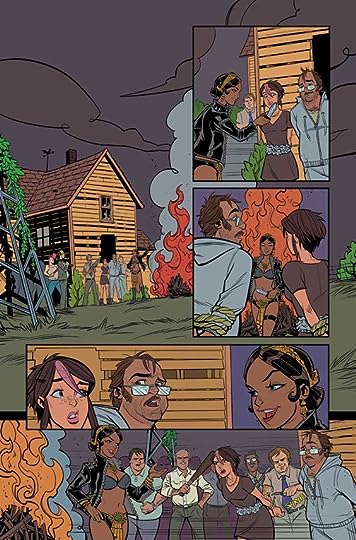 Honestly, I can't for the life of me figure out why Lexi had a crush on this Byron guy. He was gross! And if she didn't know any of the gross stuff ahead of time, maybe I could see it, but she did!
I thought it was bad enough when she was talking about how he abandoned his infant daughter. Like, that's a MASSIVE turnoff. Ew. You're scummy! You know that guy who never wrote anything legible in his life, but stuck around for his kid? <--he's worth 100 Byrons.
Then she brings up how he fucked his sister.
Dude fucked his sister? What the What?!
And he's gimping around on a jacked-up foot! Are you seriously crushing on that?!
OhMyFuckinGodDon'tBeRidiculous!

Ok. Somewhere in the middle of all that bullshit, my head exploded. This story is held together with cheap masking tape and retarded nonsense.
Ugh. Easily one of the stupidest things I've read this year.
67 likes · Like ∙ flag

All the space in my brain that would normally hold this sort of information has already been allocated for stories about people who get bit by radioactive spiders.
Sorry, my kindhearted and intelligent friends, I got no room for shit that rhymes.


You are contradicting yourself! Spider-Man totally rhymes:

Spiderman, Spiderman Does whatever a spider can
Spins a web any size Catches thieves just like flies
Look out, here comes the Spiderman

Is he strong? Listen Bud He's got radioactive blood
Can he swing from a thread ? Take a look overhead
Hey, there! There goes the Spiderman

Spiderman, Spiderman Friendly neighborhood, Spiderman
Wealth and fame, he ignores Action is his reward
Look out, here comes the Spiderman

Spiderman, Spiderman Friendly neighborhood, Spiderman
Wealth and fame, he ignores Action is his reward
To him, life's a great big bang up Whenever there's a hang up
You'll find the Spiderman!

Hahaha! Ok, I'm singing to my kids now. Thanks for that!

I've known this song my entire life but only just now, while finding the link, realized it is by the Ramones!

No way! The Ramones?! How cool!

Thanks, Carmen! This was a mess!

Miriam wrote: "I've known this song my entire life but only just now, while finding the link, realized it is by the Ramones!"

The Ramones? By the grapefruit sized prostate of Stan Lee, this couldn't be. The Ramones didn't form until the '70's.

Bonus points for using "cockamamie" in a review.

Cockamamie is making a comeback!

Or is could go down in flames like "smexy".

As always, I'll do my part.

Crap. I'm drinking out of a foo-foo mug with hearts all over it, so you win the cup contest today. :(

Smexy is a thing, btw, A HUGE thing. *cough*

I hid the Captain America mugs this morning from Mrs. Jeff so it was either Superman or the naked Santa Claus mug.

Did you see the mug I bought Hubs for Valentine's day? 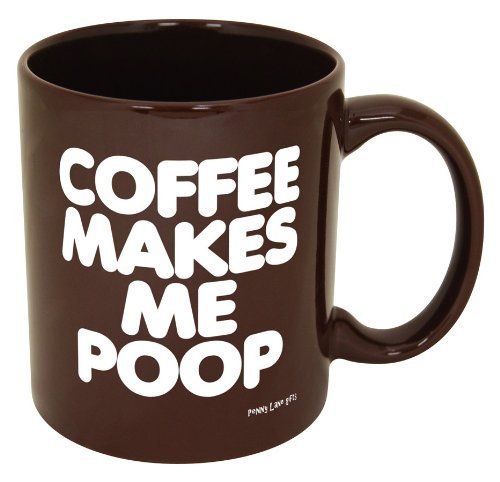 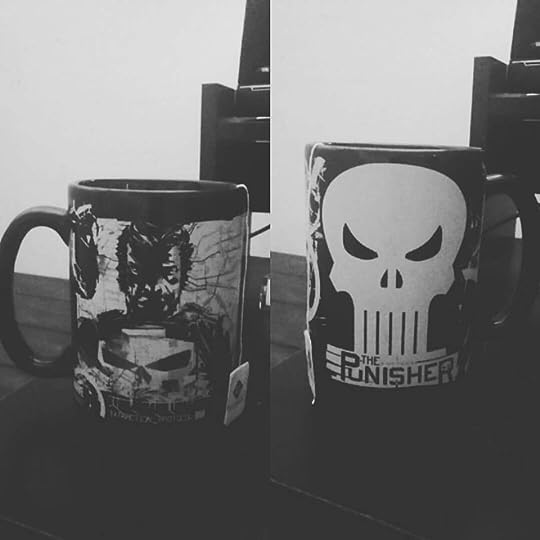 I'm guessing you use that more than Hubs.

I've been told by my son that if I go to the next convention with him I have to dress up as The Punisher.

How did you know I commandeered the mug?! It's almost like you know how married women act!

I wanna see pics if you dress up. Seriously.

Anne wrote: "How did you know I commandeered the mug?! It's almost like you know how married women act!

I wanna see pics if you dress up. Seriously."

*stares into the abyss*

Miriam wrote: "I've known this song my entire life but only just now, while finding the link, realized it is by the Ramones!"


The Ramones did not write the Spider-Man theme song. They did do a great cover of it though. You can find it and a ton of other great covers of cartoon theme songs on Saturday Morning Cartoons Greatest Hits. It's one of my all-time favorite albums.

Chad wrote: "Miriam wrote: "I've known this song my entire life but only just now, while finding the link, realized it is by the Ramones!"


The Ramones did not write the Spider-Man theme song. They did do a gr..."

Okay, thanks! The internet asserted this and I was wondering how it was possible. I'll look for that album.

I typically have a really hard time with Peter Milligan.

Philip wrote: "I typically have a really hard time with Peter Milligan."

I recognized his name but didn't associate anything awful with him till now.

So, the Ramones did a cover of the Spider-man song? That's still really cool!

Philip wrote: "I typically have a really hard time with Peter Milligan."


Same here. He strives really hard to be Grant Morrison and he clearly is NOT.