Many will say that it is and who am I to disagree. It does include all the best elements of Vonnegut in his genius: humor, dark and subtle, and sometimes not subtle at all, irreverence, absurdity blended with realism to create a surrealistic setting where the reader is cautiously intrigued by whatever is going on.

And the messages and themes, of love, relationships, responsibility, both internally and globally. Also, like several of his more endearing works, this one remains thought provoking years after being read, a quasi-morality play that the reader will revisit often and sometimes with little coaxing.

** 2018 addendum - it is a testament to great literature that a reader recalls the work years later and this is a book about which I frequently think. The great takeaway from this one is not so much ice-nine, although that is certainly memorable, but Bokonon and most specifically the beautiful Mona. A treatise on Bokononism and its effect on SF since, both in its facial aspect as well as Vonnegut's use as a satire on religion could and should be explored.

This was a bright star on my 2019 Vonnegut re-reading EXTRAVAGANZA!! and it did not disappoint. I first read this back in HS and several times in college and in the dark days before GoodReads. Back then I thought it was hilarious and outrageous.

While I still agree that it is one of his most outrageous works (My vote for top of that list though is Slapstick) and it is still funny, from my mid-century vantage I know see that in some ways this is his most scathingly cynical and the humor is a way of cutting the toxicity, like Anthony Burgess’ use of the language Nadsat to minimize the ultra-violence into a palatable offering. Vonnegut was 41 when this was published, and I am now 50

John is a disaffected but still naïve writer whose loss of his cat (John Wick?) triggers his response to chronicle the human side of the creation of the atomic bomb. Setting out to interview the family of Nobel prize winning physicist Felix Hoenikker, a principle researcher in that DYNAMITE!! Creation, John is led on a journey that winds up on the Caribbean island of San Lorenzo and a discovery of the playfully made up religion of Bokononism and also the end of the world.

Felix’ creation of ICE-NINE and of his absent minded professor innocence is a surgical tool in Vonnegut’s able social commentary to discuss the deadly combination of naïve research and military purpose.

Speaking of Burgess and his made up language, Vonnegut here tries his hand at an expansive dictionary with some words he would later use to describe his 1974 anthology Wampeters, Foma & Granfalloons. 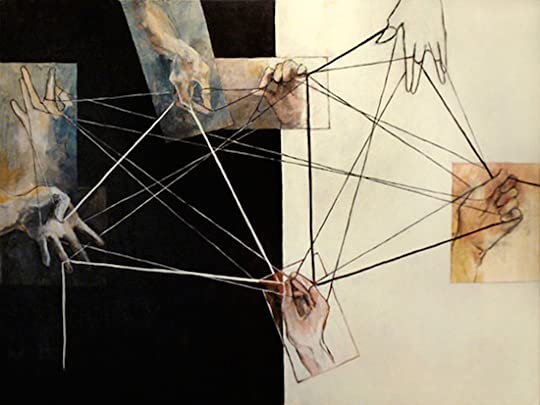 it's certainly my favorite of his so far

Fantastic review, Lyn. I love the quasi-morality part. Although his best for me so far is Mother Night.

Hey Lyn! I actually live right next to that Vonnegut building painting in IN, and it pains me to say i've never read one of his novels.

Any suggestions on where to start? Cat's cradle and Sirens of Titan is where i'm leaning!

I always feel the pressure to proclaim it as Vonnegut's best, too. Wonderful as Cat's Cradle is, my personal favorite is Slaughterhouse 5.

Wonderful review Lyn, I enjoyed it!😁

Great review. Rarely do I reread, but all the Vonnegut books were so long ago for me... they'd almost be new again. Tempting.