really liked it
A steaming hot cup of whatthef***???

Like Crouch’s 2012 mega hit Pines, it’s hard to say much without fatal spoilers, but trust me and 90% of the readers who’ve read and enjoyed this – it’s a wild ride.

Scientist and professor Jason Dessen is abducted in a back alley in Chicago and his life is changed irrevocably. Crouch explores the concepts of the multiverse and also about identity, relationships, and existentialism.

I read a Heinlein short story years ago (and have forgotten the title) where people could choose to live on a seemingly infinite collection of worlds, each connected to the “real” world but all different, from subtle nuances to wildly and dangerously dissimilar. This is also vaguely reminiscent of Poul Anderson’s 1965 novel The Corridors of Time, though Crouch steers clear of outright time travel. And that’s a good thing because if he added time travel to the mix, our heads would explode.

It started weird, got weirder and then Crouch tapped the nitro button and fishtailed ludicrous speed into REALLY WEIRD.

Fans will also see influences from Philip K. Dick and the 1999 Spike Jonze film Being John Malkovich came to mind.

I see that film rights have already been sold and Crouch is working on the screenplay. It should be a cool movie. 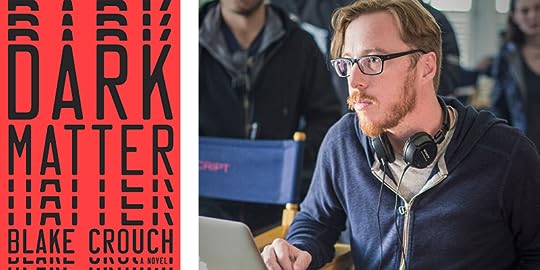 Great review, Lyn. I 'm waiting for the e-book price to come down before I buy it! :D

Great review. It will definitely be a cool movie.

I guess the short story you're referring is, "By his Bootstraps" by Heinlein.
And nice review BTW :)

That's one, and you're right, thanks Muthuvel, but it was another, I think it was in an anthology of short stories. I'll have to find it. Thanks!

I can’t pass up “a steaming hot cup of whatthef***???” I read the first of the Pines books and liked it. Will have a look at Dark Matter.

it's a great book

Was it RAH's "Elsewhen"? I am currently reading "Dark Matter" .

Great guess Denis, but that's not it - I think it was a story in The Past Through Tomorrow

This was fun, Lyn. Glad you liked it!

I'm about to start on this and not reading any reviews until after. Glad you liked it!

my rating is meh!

Wow! Liked your review so much that I ordered the book from eBay and finished it a few hours ago.

Add to what you wrote, a bit of the old sic-fi tv show Sliders.

And, as a P.S., Why won't these portable devices ever let a person type what he wants To type?

Thanks Tony, glad you liked it, looking forward to your review