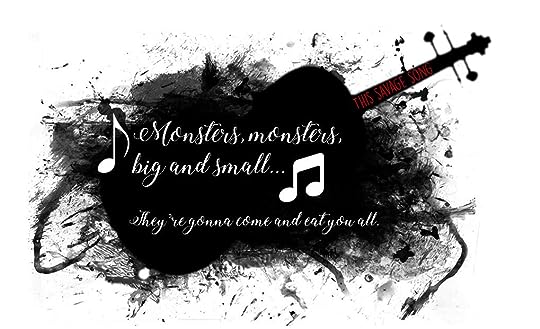 V.E. Schwab is one of our very favorite dark queens of YA Lit. She thaws our hearts with fabulously tortured characters, enthralls us with her dark and twisted worlds, and weaves in that delicious, darker side of humanity. If you’re looking for a light-hearted and fun read, you should probably look elsewhere.

Basically, she speaks our language, and the Coven was immediately obsessed with This Savage Song.

Our loves...
First, our girl Kate Harker—the human that wants to be a monster. Kate is the daughter of the vicious crime boss Callum Harker, the leader of the north half of Verity. She burns churches and picks fights, all to show her dad that she is worthy of the name, and of coming home from the private schools he sends her to.

Kate makes bad choices by seeking out opportunities to be cruel or destructive, making her all the more monstrous for it.

"Every weakness is a place to slide a knife."

August, on the other hand, is the monster who wants to be human. Those who know what he is, what he can do, fear him. Some even worship him for the destruction he could cause to their enemies. But no one, except maybe his father Henry Flynn, sees him as the normal teenage boy he wants to be.

August is constantly struggling between these two halves of himself. He’s got Henry Flynn on one shoulder, reminding him of the good inside of himself, and his brother, Leo, on the other shoulder, encouraging him to let his base instincts take the lead.

“I got lost pretending to be human.”

Sidebar: Is it just us, or were Kate and August really similar to Lila and Kell from A Darker Shade of Magic?! That would explain why we loved them so much. Both of these female characters were less sensitive than their male co-stars, a tasty reversal of traditional gender roles if there ever was one. We love when Schwab gives us another kick ass female who is not sexualized!

The Coven had some fun diving really deep into the motives of Kate and August. Both of these characters were born with a certain set of characteristics, they both were surrounded by strong personalities and difficult circumstances, and they both had to make difficult decisions. Interesting things happened when all of those things came in conflict with each other. Kate denied her humanity in response to her violent environment. August denied his monstrous tendencies to be more like the humans he lived with. This brought us back to that nature vs. nurture debate. These characters chose to do and be what they wanted, despite the odds against them.

Perhaps Schwab’s message is that we have a choice, every single day, to be our very best selves, regardless of who or what is around us.

To be honest, we were split pretty evenly between Kate’s and August’s. Some of us who have been hurt before (Don’t worry, our enemies didn’t long survive the offense) have acted like Kate, building up walls around our emotions, hurting others before they could hurt us. But others were more like August, trying always to be good and kind, even when our instincts screamed for vengeance.

Sidebar #2: Can we take a moment to appreciate the lovely creature that is Ilsa Flynn? That wasn’t really a question. We want to talk about her! Ilsa, a monster like August, was somehow sweet and good and pure (everything that we aren’t). Her distracted and out there personality gave us some Luna Lovegood vibes. Hugs for Ilsa!

As for those villians...
Harker, Kate’s crime boss of a father, and his vampy sidekick, Sloan, are so deep on our shit list, they won’t ever be able to dig themselves out of that grave. They charge money for their protection and use monsters to do their bidding, taking advantage of the North City humans under their care.

We’re hoping they get what’s coming to them, but you’ll have to read to find out…
3 likes · Like ∙ flag

Sign into Goodreads to see if any of your friends have read This Savage Song.
Sign In »