Cathrine ☯️ 's Reviews > The Hidden Life of Trees: What They Feel, How They Communicate—Discoveries from A Secret World

3.75★ If a tree falls in the forest there are other trees listening. 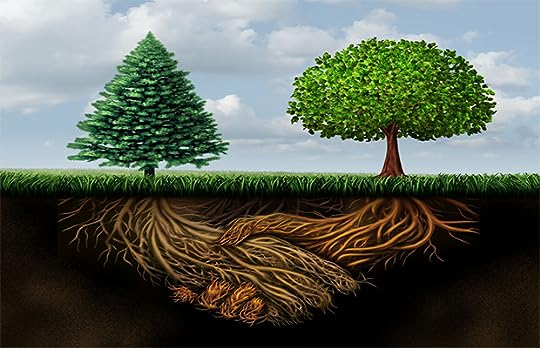 The first time I fell hard for a tree was in the Sequoia National Forest standing at the base of General Sherman. I was always a treehugger in my head but at that moment I was literally a treehugger. If you’ve never gazed up at one of the giants you are missing out on one of the earth’s wonders. 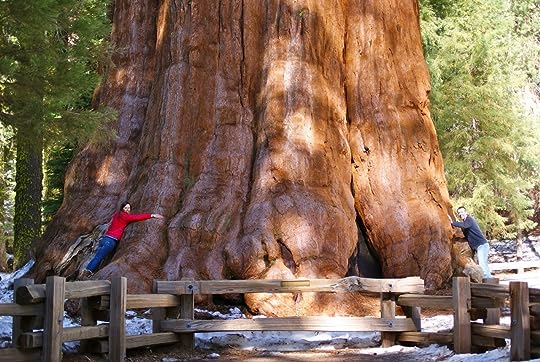 [I don’t know these people but it was wiser to post their picture than mine because it’s not legal to step over that barrier and get so up close and personal—though after reading this book I’m wondering how the General felt about it. We’re talking a Jack and the Beanstalk moment here.]

Back in the hippie days I knew people who talked to their plants, played classical music for them, and claimed there was a silent scream while trimming them back. Apparently these same compassionate people suffered no remorse when they smoked them, nor did I, but I digress so let’s move on.
So I couldn’t resist reading this after watching a fascinating PBS program called What Plants Talk About. Who knew there really is a “wood wide web” in which trees, shrubs, and grasses exchange information. My hippie friends apparently did—it wasn’t the THC after all!
I’m wondering if I should re-shelve Shel Silverstein’s book to the non-fiction section. 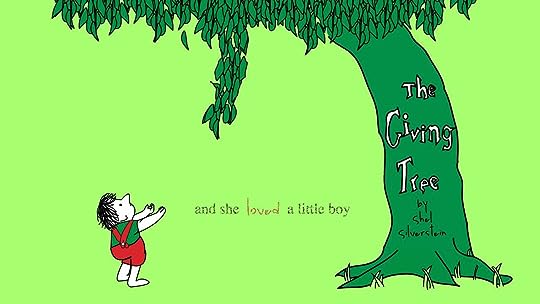 I know, I’ve told you nothing about the book because of these flashbacks but isn’t it wonderful when books mess with your head? If you love the natural world there really is some compelling information within and it was easy to digest a few chapters at a time. The sometimes anthropomorphic language may bother the non-treehuggers but it’s understandable that the author did his best to make it accessible for those who might be botany-challenged. The writing style is sometimes repetitive and simplistic and much of this is pure ecology. He champions old growth forests (dear to my heart) and throws in interesting tidbits like scientific discovery of the improvement in women’s blood pressure, lung capacity, and arterial elasticity while walking in the forest versus excursions into town. His book claimed I would never see trees the same again and that is truth. But even before I read this I've always talked to mine when they blossom and later caress the globes of fruit ripening in the sun. I tell them how beautiful they are and darned if they don’t give me peaches, nectarines, and plums to die for every year. I also voted to legalize marijuana which no longer interests me because of W.I.N.E. Those grapes are a gift and harvesting doesn’t hurt the vines, i.e., no silent screams—win(e) win(e).
225 likes · Like ∙ flag

Sign into Goodreads to see if any of your friends have read The Hidden Life of Trees.
Sign In »

Gorgeous pics, Cathrine, and nice review. Gotta say it, though: this ounds like Hope Jahren's Lab Girl redux.. Might be a good shelf-mate.

Great review, C from one tree hugger to another.

Love this review, and trees! Can you train them into cleaning up after themselves though?

Snotchocheez wrote: "Gorgeous pics, Cathrine, and nice review. Gotta say it, though: this ounds like Hope Jahren's Lab Girl redux.. Might be a good shelf-mate."

Never heard of that one so took a look. Maybe not? No personal stuff in this one... it's pretty straight forward biology from a scientist with a lot of experience managing forests. It's the way he presents it. ;-)

☮Karen wrote: "Love this review, and trees! Can you train them into cleaning up after themselves though?"

I know, and it would sure be nice if they could prune back their branches as well! Thanks K. No way do we have the leaf cleanup like you Easterners.

Phyllis wrote: "Great review, C from one tree hugger to another."

So much science I had to have fun with it.

I'm a city girl so don't see many trees and those that do grow are not as ancient and magnificent as those sequoias that I've heard so much about. But, I appreciate nature the non the less and waiting for the pot to be legal here because I like W.I.N.E too, BUT prefer no hangover :D

Love your review and the photos!

I love your review and the photos, Cathrine.

Ha, one of your best reviews!

I am laughing out loud...what a delightful review! Thanks!

Thanks so much friends, for your comments and taking the time to read my rambling thoughts. :)

I enjoyed your review... A friend sent me a tip that I'd enjoy this book after I seeing the photos I took this past weekend in the redwoods on a 3 hour hike. Some of the largest trees in width in our area --Big Basin and Felton, Calif.
I am a tree person... with Mandy and her own yard...but I never read this book. I'll add it ...,
Thanks for the enjoyment --REAL ENJOYMENT of your review.

many in our own yard. -Ali is my auto correct problem.

always that is. Lol

Elyse wrote: "I enjoyed your review... A friend sent me a tip that I'd enjoy this book after I seeing the photos I took this past weekend in the redwoods on a 3 hour hike. Some of the largest trees in width in o..."

Thanks Elyse. It is so easy to picture you walking among the redwoods. After reading this book I have to wonder if when women like us stroll under their branches they recognize us as true friends. :)

WOW! I am truly surprised by this awesome read! A family friend sent this book as a present and my initial reaction was, "Uugh- so boring!" I simply have to admit that I couldn't have been more wrong! I am sucked in all the time and find myself (as the blurb promises) never looking at a simple copice in the same way as before!

Thanks Cathrine, I have tried but can't put that better myself. Your sense of humor is no match for mine and I am in love with your seqouia description. Three cheers for Cathrine!

B E M wrote: "Thanks Cathrine, I have tried but can't put that better myself. Your sense of humor is no match for mine and I am in love with your seqouia description. Three cheers for Cathrine!"

Thanks so much BEM !

It has made my day reading this. A beautiful, sensitive, humorous review about a subject which is close to my heart.

Carol wrote: "It has made my day reading this. A beautiful, sensitive, humorous review about a subject which is close to my heart."

Thanks my tree friend :-)

I'm totally fascinated about trees. I feel them as my best friends. They are the most loving ones to me. This was my first book and I loved it completely. The author was absolutely true.. I couldn't walk by the trees normally after reading this book❤ love trees❤

I saw the barrier and immediately crossed it to give General Sherman a big hug. It felt great. I hope the General felt me. I now hug a lot of trees.

Robert I'm sure the General was pleased. He's probably had more hugs than any tree on the planet.

I am in love with this review. It makes me feel so happy : )

lexi wrote: "I am in love with this review. It makes me feel so happy : )"

Ah, thanks lexi, that's how trees make me feel as well as nice comments like yours :)

I love this review 🙌🏼🙌🏼🙌🏼 I have just got this book as a Christmas present for My Auntie (She LOVES 🌲 🌳) I cant wait to read it myself (I may have a cheeky read and see what I think of it lol, My Auntie takes ages to read anyway 😂 That’s my excuse and am sticking to it 🤣🤣🤣

Thanks Kay :-D
For sheer tree pleasure she should take a look at

The Overstory ... A long one but so worth it.

poor trees save erth everyone