Penny Meadows loves her home in White Cliff Bay. She loves her job as an ice carver. She loves her little lilac cottage, but she finds herself stuck in life. All her friends are getting married and starting families. When she rents out her annex she hopes to make the married couple feel welcome and maybe make some friends in return.

Imagine her surprise when that married couple turns out to be a smokin hot single dad with a teenage daughter. 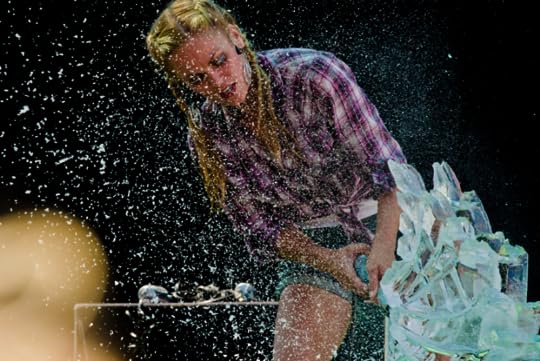 This is a confusing review for me to write to be honest. I enjoyed this one, but at the same time I didn't. If that makes sense? The first half of the book was wonderful. I LOVE Penny, in fact I loved her through the whole book. At first I thought Henry was going to be this gruff curmudgeonly old guy because the first impression of him isn't great. Luckly he apologizes quickly and we move on from there. I loved the small town feel and the festive setting of the book. It had great secondary characters as well as well as some laugh out loud moments.

Which leads me to some of the issues I had with it. Both Penny and Henry sound at least 10 years older then they are. At the start I thought Penny was in her late 30's (she's 29) and Henry was in his 40's (he's 32). Also, about half way through I started to get sick of Daisy (Henry's daughter) she wasn't a bad character. I just got sick of everyone being ALL about Daisy. Henry basically plans his EVERY move around his 16 year old daughter. I could have accepted that had she been 8, but she is a 16 year old. 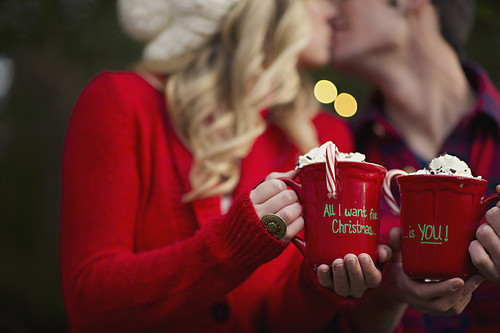 He doesn't want to hurt Daisy, so he can't have anything permanent. Then Daisy tells him not to "date" Penny and he agrees. THEN he starts dating Penny on the sly, and tells her they have to keep it a secret from Daisy so as not to hurt her. Going so far as to stuff Penny in a closet the night after they have sex for the first time when Daisy shows up unexpectedly. I wanted Henry to have some damn balls and stop letting how Daisy would react dictate EVERYTHING.

I also thought the last half of the book dragged a lot. There were things I thought were out of place in the story. Like the whole Clara "sexual harassment" storyline which added nothing to the overall plot of the book. No drama within the couple, really no drama for Henry either as it was all resolved without any mess. Some of the ice carver stuff didn't add anything to the book and "I" felt took away from couple time between the H/h.

So overall, loved the first half of the book. Wish the second half had been tightened up a bit plot wise. So a "down the middle" 3 stars from yours truly.

Sign into Goodreads to see if any of your friends have read Christmas at Lilac Cottage.
Sign In »

Brilliant review Eve. I don't think I've seen the word curmudgeonly since I stopped reading Agatha Christie and Nancy Drew books. Thumbs up for bringing back an awesome word!

Great review sweets. I need to know does Henry finally stand up to Daisy?

Janie wrote: "Great review sweets. I need to know does Henry finally stand up to Daisy?"

Thanks! Well Daisy isn't a brat or anything, so there isn't anything for him to stand up against. He just lets how "he thinks" she would react dictate his life.

When she asks him not to date Penny, she isn't being mean, she knows he isn't the greatest at relationships and she like Penny, likes living there and doesn't want to see her hurt and them have to move.

I just found it all a bit much with her being a 16 year old, not a child. KWIM??

Oh ok. I thought she was just being bratty.

Janie wrote: "Oh ok. I thought she was just being bratty."

No, it's hard to explain really well though.

I'm enjoying your Christmas story reviews. I've been watching out for some of them to enjoy during the holidays. I gotta say though, I think I'm gonna let this one slide. I need my H to stand up to everyone for the love of his h...even if it is to his own child. Thanks for sharing your review!

Carvanz wrote: "I'm enjoying your Christmas story reviews. I've been watching out for some of them to enjoy during the holidays. I gotta say though, I think I'm gonna let this one slide. I need my H to stand up to..."

Such a christmasy review. Great Eve, thank you :)

Eyvette wrote: "Such a christmasy review. Great Eve, thank you :)"

Very accurate review. Just finished this one. It's tough to review I know.

Amy wrote: "Very accurate review. Just finished this one. It's tough to review I know."