I did not expect to enjoy this book so much.

How many YA fantasy novels have I read that are called something like "The Queen of ____" or "The ____ Queen"? Too many. Way too many. How many feature a throne that is up for grabs and both a male and female POV? Pretty much all of them. Somehow, though, The Queen of Blood takes a familiar concept and does something that - for me - was completely different.

For one thing, I absolutely loved the setting. Aratay is a place where everything, every village, every city, is built on giant tree branches. Unlike the usual Medieval-style fantasy novels, this one is entwined with nature. The forests of this land are alive with spirits that represent the elements (as seen above in the rhyme) and the spirits are inherently evil and violent towards humans. However, some women have the ability to summon and control the spirits, to varying degrees.

Below her, above her, and all around her was the academy. It was a circle of trees whose trunks had been fused together into a ring and whose bark had been smoothed and polished to gleam like marble, a hollow tower with rooms within the walls. Spiral stairs ran up the inner ring, edged with ornate vine-coated banisters that looked like lace. On each level, the stairs produced a platform that cut into the air and also recessed into an archway that led into the interior of the tree.

This is pretty much how I picture this world: 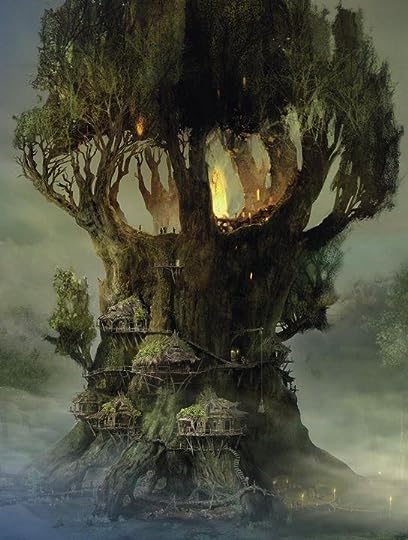 In Aratay, the Queen controls all spirits and protects the citizens from their violence. Other women with the affinity are trained to be potential heirs to the throne so that Aratay is never left unprotected. However, as the story unfolds, it looks possible that the Queen may be losing control. The book starts with Daleina discovering her own ability when she saves her family from a spirit attack. The rest of her village perishes and she vows to become stronger and better so this tragedy will not happen again - therefore, she goes to the academy.

If this had been your average fantasy novel, there is no doubt that Daleina would have battled her way to the top, doing no wrong, being the best at everything, delivering empowering speeches and having a once-in-a-lifetime epic romance. Or three. But this is not that book.

Daleina is actually not the best. In fact, as potential heirs go, she's one of the worst. She gets through by using smarts and strategy instead of power and strength. Her attempts to control spirits often do not go as planned, but the underlying message seems to be that thoughtful consideration and hard work trump innate talent. And I kind of like that. She's not special, she just works really hard.

I found the story very compelling. Some things I saw coming, others not so much, but either way it was a difficult book to put down. The book moves from dramatic action scenes full of raging spirits to quieter, character-driven scenes between the female students. All of them were enjoyable. Though the two perspectives are the standard male and female POVs, they are not starcrossed lovers. In fact, Ven is a mentor and kind of father figure for Daeleina, and the small romantic subplot remains firmly in the background.

It's also extremely bloody and nasty, sometimes terrifying. Don't make the mistake of thinking that any character is safe - because the author is just the right amount of evil.

There's also so much female friendship. It is, in many ways, a matriarchal society and many of the characters are female. And though they are competing for a limited number of positions, they remain friends throughout. They support one another, encourage one another, and cheer for each others' successes. It's diverse in colour, sex-positive and contains no woman-hating. Jealousies exist, as they always do, but even the most talented, beautiful girl is not an enemy.

"They're jealous of me."
"No one is jealous of you." Daleina resisted the urge to roll her eyes. Sometimes Merecot got in these moods. Daleina was never sure if she meant it or not. Merecot never sounded upset, but she excelled at hiding her feelings.
"Except you."
"Except me, of course," Daleina said, "but it's not because of your incredible powers, or the fact that you're at the top of every single class."
"Oh, really?"
"It's because of your hair," Daleina said with a straight face. "You have the best hair."

The ending is a grisly combination of awful and perfect. I'm so excited about some of the things the author has set up in this book. A few things have been briefly mentioned that I know must surface in the sequel and, honestly, I cannot wait!!

Sign into Goodreads to see if any of your friends have read The Queen of Blood.
Sign In »

I love seeing YA fantasies actually turn out great. Yay!

Damn your reviews, they're so freakin' amazing that I want to go and buy and read that book right now!!

Marcelina☮ wrote: "Damn your reviews, they're so freakin' amazing that I want to go and buy and read that book right now!!"

Girl love and a relatable main character! Definitely looking forward to reading this book even more.

Amazing review Emily May. Don't you like it when humans aren't the domeneering species in a fictional world?

Love how you say the author has just that amount of evil. And a character that is good because she works at it. Oh yes. Can't wait to read it.

Where did you learn your speed reading magic?

Excellent review, Emily. You've piqued my interest in this one and I do rather enjoy the cover of this edition. I shall keep an eye peeled for it.

I was not highly anticipating this book, but after this review, damn I'll pick it up the day it comes out! Great review Emily :)

Great review, Emily. I really enjoyed this book too -- I hope it finds an audience.

Lovely review, Emily! I ended up liking this book so much! Initially, I was afraid that its theme ran too close to uprooted's, but after reading it, I saw that the story was completely different and equally gripping if not more. so, not worries on that front! And YES, to those strong sister bonds, and female friendships!

Perfect review! And you're so right, "The Queen of Blood" by most other YA authors could have been dull as hell, but this was so good.

Oh Merecot, what have you done

This was marketed as adult, although the lines between YA and general audience are pretty slim and it slides to YA, IMO. What I liked best is that it has a straight line plot, nice world building, strong well balanced characters, and terrific sense of story

Read this book based on your review and I LOVED it! Although I did dislike how underrealized her talents were. She was a bit too mediocre, in my opinion, and I agree that it was a great lesson about hard work trumping talent except that she mostly was luckily. The way she became queen was such a letdown for me. In part because I read the synopsis for the second book, and it's about another queen. So knowing this was the end of Daleina's story and that this is as good as she'll ever get... Meh, I was disappointed. Still gave it four stars because I devoured the book, but would have been fine if not for the ending.

You just sole me on this. I finished Strange, the Dreamer last night. Going to read this next! Thanks for the review!

Gea wrote: "You just sole me on this. I finished Strange, the Dreamer last night. Going to read this next! Thanks for the review!"

Hope you love it too!

Can't agree enough. So excited to start the sequel!

Thanks for a great review, I'll be reading this book soon

Congratulations on selling me great another book I was about to overlook because of the not so promising title and description;)

Mokona wrote: "Congratulations on selling me great another book I was about to overlook because of the not so promising title and description;)"

Yay! I think this series is so underrated. Hope you enjoy it :)

I knew I put this on the mountain because of youre review. Now I just have to get cracking and track down a copy. I see there is a sequel to this one as well.