ARC provided by author in exchange for an honest review

May I, just say that I adore A.J. Pine and her heartwarming second installment to The Kingston Ale House Series. And “May I” also just say that Pine has truly proved to romance readers out there that she can indeed write a love story that has chemistry, heart, raw emotions, and playfulness.

Six Month Rule is not your typical office romance trope. First, Pine doesn’t write a love affair that centers on the forbidden aspect of office mingling but instead she highlights and brings forth a love story that centers on two emotionally flawed individuals.

“He spun slowly to face her, and Holly’s heart leaped. His hand rested lightly on her cheek, and then his lips were on hers. There it was. That inexplicable warmth, but Holly knew what it meant now. It meant this was real. What she felt wasn’t fading, and instead of relying on the fact that it would, she let those words loop over and over again along with the rhythm of the kiss.”

Will Evans is British. Yes, I think that alone is enough reason to read this book. Well if being a hot British hero is not enough encouragement for you to read this book then how about HOT BRITISH SINGLE DAD WITH A HEART OF GOLD AND HAS THE CHARM TO LEAVE YOU A BLUBBERING MESS AND WET THOSE KNICKERS. Will’s life has consisted of work, work, and more work. And he is well aware that he is missing these important crucial bonding moments with his daughter, Sophie. And so when Will decided that after this six month project in Chicago that he will slow down and dedicate more time with his daughter. Six months only… well that was the plan until he met Holly Chandler. 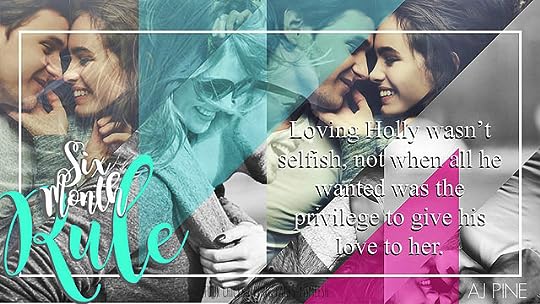 When it comes to love, Holly Chandler has these rules. Six months that’s it. Love has never been in the forefront when it comes to Holly’s life since she has plans of moving up in the workforce. And so when she meets Will Evans, the new guy that she will be temporarily working with, she never thought she would find herself breaking her own rules.

“Just because you make the rules doesn’t mean you can break them. Or does it?”

May I just say that Holly and Will are too cute for words. Yes, this couple gave me that warm fuzzy feeling and made my heart burst with so much love. Seriously these two, had chemistry and love that was sweet and sticky as molasses. And then to top it off with an adorable seven year old daughter who stole my heart right off the opening pages as she understood that Holly was special. Also, AJ Pine incorporates the aspect of astrological signs into the story line as Holly is obsessed with daily horoscopes. So will the stars and fates aligned for Holly and Will? Or will their six month rule come to an abrupt end? Or are rules meant to be broken? Does love come with an expiration date?

May I just say that AJ Pine has perfectly layered Six Month Rule with so much depth, beauty, charm, and playfulness that readers like myself can FEEL the stars are indeed aligning for Holly and Will. I loved that Pine allowed readers to see this thing blossoming between Will and Holly is real and like any real relationships there are few bumps and hiccups that they must overcome. So if I may say if you are looking for a book that was smart and beautifully well-written, then I urge you to break all the rules when it comes to love because in love there are no rules when it comes to listening to your heart. And of course you get the added bonus of having a British hero who will having you smiling big.

Thank you so much, Eve xx