Find this and other reviews at Ramblings of a Daydreamer. 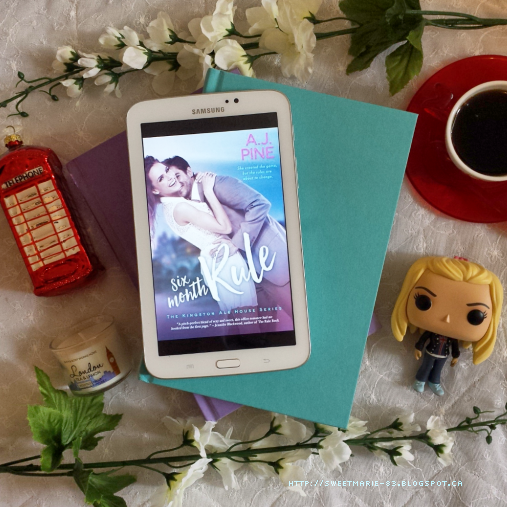 AJ Pine has done it again! Pine became one of my favourite authors last year, and with her newest book, Six Month Rule, she continues to make me fall for her characters and stories. Six Month Rule has sexy, funny, feel-good romance written all over it, and it was exactly what I needed. Plus, can I just say: hot British guy in a three-piece suit? SOLD.

I appreciated that Six Month Rule took a familiar trope - office romance - and made it different from the norm by not focusing on the ‘forbidden romance’ aspect. Even though there were stakes involving Holly’s job in particular, the conflict was focused elsewhere, which was a nice change. Holly and Will were both driven people, focused on their careers and their futures. Because of that, and because Holly has discovered relationships fizzle out quickly for her, she created the six month rule - no relationship can go past the six month mark. In those six months, she can have great sex, have fun with the guy, but not develop serious attachments or have romance get in the way of her career. Then Will came along. Will, who's charming, a bit distant and mysterious, and as passionate about his job as Holly is. And sexy. Let’s not forget sexy. (Did I mention the whole hot Brit in a three-piece suit thing?) I loved how their relationship progressed from reluctant colleagues to something more, then something much more. There were so many layers to the story and to these characters, which made them easy to root for individually and together. I couldn’t imagine how things were going to work out for them, which made for an extra element of tension that kept me captivated.

Holly is hilarious and adorable. She's this mixture of single-minded businesswoman and quirky girl next door. She said and did things that made me laugh and shake my head (in a good way - that affectionate way you do with your closest friends when they’re being weird and you’re reminded just how much and why you love them), but then she’d think or say something that made me want to hug her really tightly. I loved how she opened up to Will and slowly let him see parts of her true self, even when he held back. Will was a fantastic character, too. I loved that he wanted to make up for past wrongs without being the tortured, brooding hero. He was exactly what Holly needed.

If you’re looking for a charming, lighthearted, feel-good romance with real emotion, plenty of steam, and swoons aplenty, you need to read Six Month Rule. Even though this is technically a standalone and you don’t have to read The One That Got Away, I highly recommend that one as well. Jamie and Brynn are great characters, and it was like reuniting with old friends when they appeared in Six Month Rule.
2 likes · Like ∙ flag