liked it
Read 2 times. Last read October 19, 2020.
UPDATE 2020: Had the sudden urge to check out one scene from this book and ended up rereading all the scenes with Mitch in one quick succession. (Yes, I still skip the pages only to read the scenes with Mitch/Blondie).

It's just that I take so much joy in the actual romance scenes of this book that I don't even care for the fact that the couple doesn't fit that well together. Similarly to my reading experience with The Hating Game: I love the romance, hate the couple.

The emphasis put on simply displaying tender touches instead of rushing to check off big milestones is the definition of romance™. I want more!!! Which is probably why I keep coming back to Summer skin time and again. But it's also why I'm perplexed by this book. I mean it has hands down one of the best romance scenes I've read and yet it degrades itself in the second half by including so many unnecessary drama scenes. Why? I've said it once and I'll say it again: This is a romance book, we're here for the romance!!

I mean, Mitch is the kind of guy you see repeatedly women complain about in advice columns with his hot-and-cold behavior: "If a guy wants to hang out daily but avoids getting personal does that secretly mean he really likes me?" Yeah, just the kind of guy you dream about... I felt legit sorry for Jess for having to put up with him simply because she's addicted to his touch. Something as little as Mitch refusing to give his phone number to her aggravated me (he refuses multiple times, ugh). If anything, the social distancing rules now in place keep guys like Mitch away. Far, far away.
Like I said, I had more respect for him as Blondie because at least Jess put him in his place. Also, hot.

Oh, and funny looking at the dates of my previous reread to notice that I read it around the same time last year. There are cosmic forces at work with this book. Like I noted at the end of my review: their sexual tension traveled into the future to remind me to reread it.

Previously:
When you intend on only going back to reread one chapter and end up awake till nearly 4am to finish the book... Help. It's those damned Coca-Cola cans.

Also, why did I end up enjoying Mitch when he was simply known as “Blondie” more? The thrill of Jess’s electric chemistry with him at the start was everything. It’s why I kept reading on and on. I'll be the first to admit that his "Can I touch you?" worked all too well on me. I really enjoyed them challenging each other to see who would push the line too far. But that only seemed to happen at the start.

So the end turned into a bit of a let down with Mitch constantly disappearing, basically ghosting Jess, only to turn up intoxicated at her doorstep. Rinse and Repeat. Mitch's quick remarks as "Blondie" and Jess's feisty remarks putting him in his place were simply too good to be replaced with this wishy-washy behavior.

As a disclaimer, I tried reading this back in May 2016 and dnf'd it because "Blondie" turned into "Mitch," and it really wasn't doing the same for me at the end. But given that it's been three years and I could still recall scenes so vividly, like the Coca-Cola cans and the construction workers scene, really speaks volumes about this book. It was written so well that their sexual tension traveled three years into the future to remind me to reread it.

Check out when the fun begins through this excerpt: 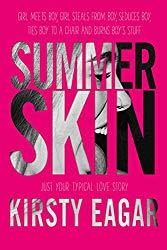