If there is ever an MC book that deserves a book hug, CHAOS BOUND by Sarah Castille would be it. I LOVE this fourth installment to the Sinner’s Tribe Motorcycle Series, which happens to be my favorite. As a big fan of the series, I love that Ms. Castille continues to give her readers the rough, sexy, dangerous and intense MC romance novels.

“She felt right beside him. Perfect. Broken. Just like him.”

In this dark and dangerous world of bikers, Sarah Castille not only takes her readers down a vivid and raw journey of the MC clubs and the fierce ladies, who are willing to go beyond the means to protect and stand by their men but she also allows her readers to FEEL the vulnerability, anger, revenge, hope and passion. And trust me when I say that Chaos Bound is bound with so much raw emotions and intensity.

“I got a lot of anger in me,” he said softly. “Always have, although nothing like I got now. Sometimes I’m afraid it will consume me. But when I’m with you, it … just … fades. I’ll never hurt you. Never push you farther than you want to go. You’re safe with me. You got my word on that.” 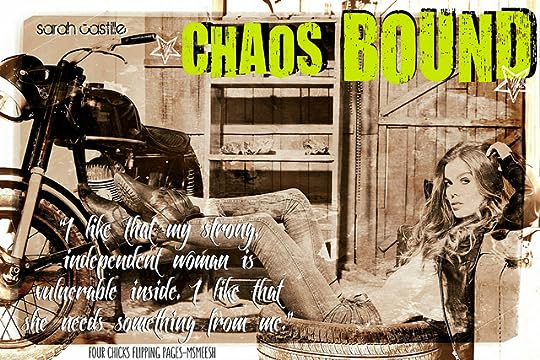 In this fourth installment, Sarah Castille perfectly weaves a raw, gritty and intense perspective of revenge and the code of brotherhood that these bikers live and die for. Unlike the previous books in this series, Sarah Castille stripped her characters to the very core allowing readers to FEEL every emotions. And I mean everything from hate, sadness, loss, hopelessness, emptiness, anger, revenge, forgiveness, and love. With a wide array of emotions thrown at the readers, Ms. Castille allowed readers to feel for her hero and heroine.

“I need you,” he said. “You’re mine, and I’m not going to let you go. Whatever I have to do, whatever it takes, however long … If you can’t live the biker life after I’m done with Viper, then I won’t live it. But you can’t leave me. I am nothing, Naiya, if I don’t have you.”

REVENGE is the only thing that consumes and keeps Holt “T-Rex” Savage alive. As a member of the Sinner’s Tribe MC, Holt has been held captive by their rival MC, the Black Jacks for three months where he has endured every torture. Scarred and left broken, Holt is filled with hate and anger that his MC left him to die. As darkness clouds Holt’s heart and mind, he never thought that there would be any chance of light and freedom that is until Naiya Kelly stumbled into his life and saved him.

“The new Holt was demanding and controlling. Impatient. Serious. So far removed from the self he knew, he would be lost without Naiya to anchor him to the ground. He needed her now. Needed to claim her, body and soul.”

For the past eight years, Naiya Kelly thought she escaped the Black Jacks but when she was taken by the club, she knew her chance of survival lies with Holt Savage. As prisoners of the Black Jacks, Naiya and Holt teamed up together in order to escape. Freedom was only temporary while on the run since the Black Jacks President, Viper wants Naiya at all cost. 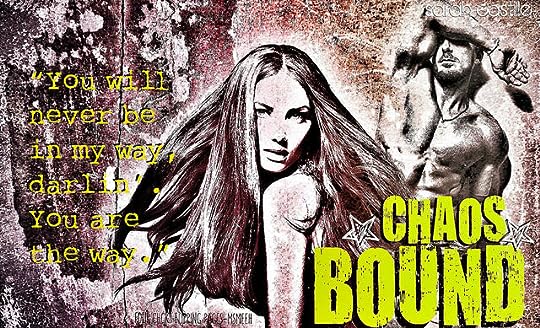 As Naiya and Holt try to come up with a plan to survive, Holt has only one thing on his mind. REVENGE. Not only does Holt want to kill Viper and the Black Jacks but he also wants revenge on the Sinners. But as Naiya begins to get to know Holt, she sees that the three months being held hostage has hardened Holt and changed him. As Holt begins to let down his walls when he is with Naiya, he begins to open his heart to her. And for the first time in his life, Holt finally found someone to LOVE. But with danger looming, Holt may have to let go of his anger and ask for help from his best friend, Tank and the Sinners. Will Holt be able to fulfill his plot for revenge? And did the Sinner’s really betray Holt or was it all a misunderstanding? And as a changed man, will Holt be able to walk away from the biker life and follow a new path with Naiya?

The sexual chemistry and bond that exists between Holt and Naiya was sizzling and palpable from the start. Their connection was the cementing foundation of what it means to sacrifice, honor, respect, and fight for your love. Though their love may be complicated, I loved how Ms. Castille kept their romance heated with passion as danger and doubts begins to surface. I loved how the author kept this book an MC trope but incorporated the elements of love, family, brotherhood, second chances and friendship to be the forefront.

“I love that you’re mine , that you know the worst of me and still want my touch, that you know me as I am now, that I wake from my nightmares and find myself in your arms. I’m gonna make sure you’re safe and happy and able to live that normal life you dreamed about.”

Chaos Bound was such an intense, raw, brazen and gritty perspective of the world of bikers, brotherhood, revenge, and friendship. The writing and story line was so gripping and consuming that you can’t help but be immersed into the story of Holt and Naiya and what awaits for them. In most MC novels, the club would be the main focus but in this installment, Sarah Castille surprised me. She made this more than your typical MC biker book. She allowed readers to see beyond the revenge, anger, hurt, and brotherhood. She made you see friendship and the sacrifices we choose to make. She made you see LOVE. And most importantly she made you see Holt and Naiya. Not Holt, the biker but Holt Savage, the man who fell in love with a science nerd. A man who is willing to risk anything for the girl who saved him. And for Naiya Kelly, Holt Savage brought beauty, love, and passion that was missing in her life. He didn’t see a rape victim. He saw her. The real Naiya Kelly.

“She tried to commit him to memory, the warmth of his lips, the deep rumble when he looped an arm around her waist and pulled her against him. She wanted him. Needed him. She’d made it through hell, and he was her piece of heaven...She had never felt as complete as she did at this moment; never felt she really belonged until she’d stepped into the circle of his arms.”

Like I said before, this book was so much more. It is a story that reminds us all nothing is black and white. Dreams change. Life goes on. Love heals. And most importantly, each and everyone of us will make a choice. A choice that will lead us to happiness or of the unknown. And this choice that may be bound with chaos is a journey that Holt and Naiya are willing to navigate together. So if you are looking for a story that has grit, intensity, danger, passion and most importantly heart, then I urge you to read this book. Go fall in love with two damaged and broken characters who found comfort, solace, and truth together. Beyond the scars, heartaches, sadness, loss, and anger lies a story of what it means to truly protect the ones you love even if it means death and letting go. So if you are ready to ride through a chaotic, wild and fierce love, then all there is left to say HOLD ON TIGHT as Holt Savage will pull those heartstrings and show us all what it means to be truly wild and free.

Thank you so much Jen xo