The only way to be truly satisfied is to do what you believe is great work, and the only way to do great work is to love what you do. If you haven't found it yet, keep looking, and don't settle. As with all matters of the heart, you'll know when you find it. And like any great relationship, it just gets better and better as the years roll on. So keep looking, don't settle. 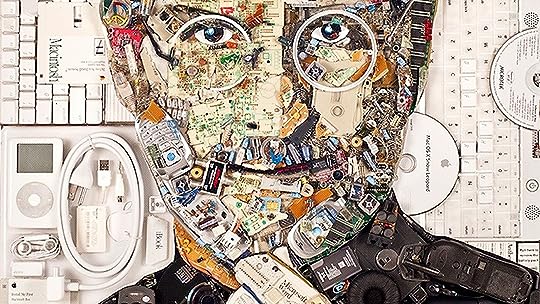 This book is an epic biography of a genius who made various remarkable changes in our world i.e. Made a dent in the universe (from Jobs' perspective) is also a history of the most exciting time in the age of computers, the times when the Silicon Valley was blooming ...

Jobs had quiet a complex personality at times being charming, obsessive, ruthless, lovable, loathsome and maddening. His character was instrumental in shaping some of the greatest technological innovations. He had this OCD towards perfection and love towards simplicity in a design resulting to his intense binary view of the world (hero/shithead)

Making riches was never a goal of Steve Jobs, he insisted on making great products and building an enduring company. He considers himself as an artist and his products as paintings and thus he believed in integration of hardware and software in devices establishing an end-to-end control which was a different Philosophy against other giant companies like Microsoft and Google who promotes open source environment. This end-to-end system restricts the hacking nature which seemed quite ironical in the 1984 Apple commercial which metaphorically described the company as a revolt.

After all, Steve Jobs' life was full of ups and downs. I feel the best parts of the book are - Steve Jobs' journey for spiritual discovery in his coming-of-age and his fall from his own company (that was so emotional)

This book is an odyssey and will remain one of my favourite biographies.
8 likes · Like ∙ flag

I remember picking this up because someone in my family had bought it and I didn't have anything else left to read, but then just being hooked... I'm glad you've enjoyed this, too, great review!

Michelle wrote: "I remember picking this up because someone in my family had bought it and I didn't have anything else left to read, but then just being hooked... I'm glad you've enjoyed this, too, great review!"