It pains me that I am unable to give this book five stars. I truly wanted to love this story. I definitely found it intriguing and it kept me guessing, but mostly I found it frustrating. I have a great deal of admiration and respect for the author, too, so I feel awful for not liking this one as much as the books in the I am Her series.

Sadie is a twenty-eight-year-old woman with a husband, Alex, and a six-year-old son, Jamie. While Alex and Jamie are away for the weekend, Sadie takes the opportunity to pull out her old hatbox full of nostalgic tidbits and mementos. Within the box are two books--a spiral-bound notebook diary and a teal blue silk journal. On the verge of a breakdown, Sadie has purchased five extra-large cups of coffee and eight packages of cigarettes to help her cope with facing her past. 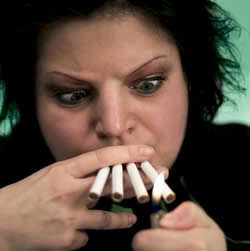 Nope, Sadie hasn't exactly had a charmed childhood/young adulthood. Her parents--though loving--are too neglectful. They give her too much space and freedom. When she's sixteen, a man visits her bedside. He doesn't harm her and she's not disturbed by his presence. Every so often he visits, becoming her dear stranger. It isn't long before their relationship evolves into more than an innocent friendship. Sadie's stranger visits her for years, unbeknownst to anyone. In the process, he causes her an avalanche of emotions, including love, joy and anguish.

Who is Sadie's dear stranger? That question taunted me throughout the story. I even wondered if he were simply a figure of her imagination. This wasn't what was frustrating for me, though. On the contrary, it added to the air of mystery and suspense and kept me immersed in the story.

What I found terribly frustrating was Sadie herself. Quite frankly, she was a mess. And I truly and honestly tried hard to overlook her shortcomings. I knew that she must have had a troubled life but I couldn't excuse her self-destructive behaviors and worse, her denial of those behaviors. (view spoiler)[Sadie would often cut herself but didn't consider herself a "cutter." She'd drink excessively--sometimes to the point of alcohol poisoning, but she wasn't an alcoholic. She self-medicated, smoked like a chimney and generally neglected her health. (hide spoiler)]
It seemed as if Sadie didn't make much of an effort to improve her life--she just let all the doom and gloom consume her. Thankfully, having no knowledge of what it's like to face everything she went through, maybe I'm just unable to show empathy/sympathy. It was just incredibly frustrating to read about her descent. Also, I found it too repetitive at times.

I also had some trouble following Sadie's journal entries, as they are not all numbered properly and I wondered if I had missed something. There are two number twelve (XII) entries and no thirteen (XIII). And at one point, jumps from sixteen (XVI) to the second twelve (XII) then to nineteen (XIX). I don't know why I'm so picky and noticed this, but it did throw me off a bit.

Anyway, I don't mean to make this book sound poorly written or too exasperating because it's actually a great story. Walker is an incredible author and I generally enjoy her characters but I didn't bond with Sadie at all. I admit that when everything became clear at the end it helped to minimize her faults to a certain extent but by then I was just too drained. I liked her husband Alex a lot, though. He has the patience of a saint! I also liked a character named Patrick whose personality was very well-written and believable. (view spoiler)[The scene with Patrick, his boyfriend and Sadie really shocked me! (hide spoiler)]

In addition to a riveting storyline, Walker's writing is impressive. There is a poem within the story that is beautifully haunting. Although I personally didn't care too much for Sadie, she is written with such a descriptive depth that I could almost feel her emotions as if I'd somehow assumed her identity. That's talent.

I will absolutely read more books by Walker. I might even read this one over one day. Maybe it was my own frame of mind preventing me from totally loving it. So please don't let this review turn you away from this book. It definitely is worth reading.
3 likes · Like ∙ flag

Sign into Goodreads to see if any of your friends have read My Dear Stranger.
Sign In »