it was amazing
bookshelves: fiction-literary

An endgame in progress forever awaiting resolution, the trap of beliefs, The Yid is fucking brilliant. It's a mystery that's solved about a mystery whose solution forever remains elusive. It's an alternative history that's is more real than history. It's not Sci-Fi in any sense I can find. So how did it win a Hugo? I can see another Pulitzer for Chabon or a Rhor but never a Hugo. I guess the Hugo Yids were campaigning for a literary sense in SF. I don't consider Alt-His to be Sci-Fi per se. It can be, but this isn't. Maybe it's all considered high fantasy by the Hugo-goys.

And it's a comedy, black for sure, but for me there many LOL moments and would probably have been many more if I understood all of the allusions. Having Wikipedia at hand and an Yiddish-English dictionary is almost essential (try nechvenin). You do want to know whose real and who's fictional, no? Emanuel Lasker, eg. I didn't use these references, but will for the next read.

And it has so much to teach. The Tzadik Ha-Dor, eg, a phrase I had never heard, but being a Sci-Fi master myself thought immediately of the Kwisatz Haderach. And, the concept of The Tzadik Ha-Dor helped me understand The Golden Path just a bit better and why 10,000 years later humans were still trapped my their mythology in Dune.

I give this a 9.7 and not a 10, only because I found Kavalier and Clay more fun and personal.

This pix is a clue: 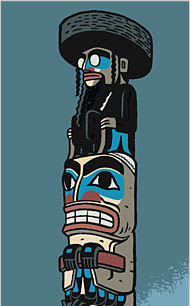 Sign into Goodreads to see if any of your friends have read The Yiddish Policemen's Union.
Sign In »

My husband read this awhile ago and recommended it, but I haven't got to it yet. Will move it up the pile!