This review also appears on:

Okay, let's not pretend that this isn't just a complete adaptation of Sherlock. I mean, aside from the entire premise, Jackaby's signature hat is literally this:

But all things considered, I found myself liking this book a lot more than the first!

Sticking with the Sherlock analogy, this series' biggest fault is similar to the original ACD canon: the characters are interesting and the plot is fast-paced, but I never found myself caring about the world or characters. There's a very removed feel to it that you can be engrossed in what's happening, but it feels more like a tale that's being told than the first-person narrative that it is.

That being said, the book is a fun ride to take! Here's some major pluses it has going for it:

CREATIVITY. Ritter doesn't like to take the easy way out with his supernatural beasties. To paraphrase the first book a bit. "Bodies with bite marks drained of blood. Do you think it's a vampire?" "Oh Abigail, that would be so boring." Just like in Jackaby, the villain/creature of Beastly Bones is an imaginative creature of Ritter's own creation. Considering the mystery element isn't particularly convoluted, it helps keep suspense for the readers in that we literally don't know what is happening.

HUMOR. Witter has a fantastic wry sense of humor much like my own. Jackaby may be very Sherlockian in his anti-social nature, but he is constantly making jokes about how strange he and his world are. In case you haven't come across this tidbit around the internet: 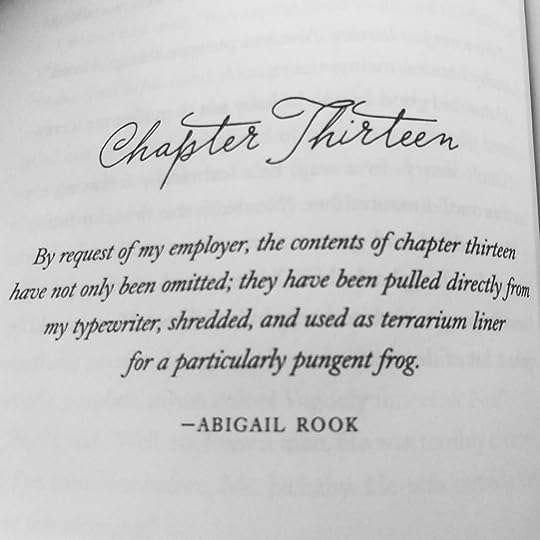 BADASS FEMALE. Abigail is that rare kind of character that is a feminist before her time but not at all forced. Heck, she passes the Bechdel Test with most of her conversations with men and women alike being about things like her job, the crime at hand, and scientific writings. Really, I think it's her background in archeology that makes her such an interesting character. In Jackaby she was mostly just going along with Jackaby's adventures - albeit with a backbone and a good head on her shoulders - but in this book, she excels past everyone around her in knowledge of the subject at hand. To make this even better, the other characters aren't just sitting around saying "gosh darnit a girl that can think;" they just come to respect her and treat her as part of the action.

If you're looking for a quick read with some mystery, supernatural creatures, and an interesting cast, this is the book for you!