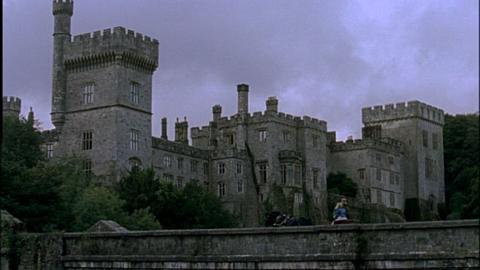 ... and Jane Austen just having fun with us.

"Now I must give one smirk, and then we may be rational again."

Seventeen year old Catherine Morland, as innocent and naïve a heroine as Austen ever created, with no particular distinguishing characteristics except goodhearted sincerity and an overfondness for Gothic novels, is invited to stay in Bath for several weeks with kindly and wealthy neighbors. She meets a new bestie, Isabella ...

... as well as Henry Tilney, a guy who's far too quick―not to mention wealthy―for her. But he has a weakness for cute girls who totally admire him.

Their relationship strikes me as weak, probably because Austen was focused more on creating a parody by turning Gothic conventions on their heads than on creating a compelling heroine and romance. Henry is a great character, but Catherine really isn't quite up to his level, despite all of Jane Austen's rationalizations (though maybe that's true to life sometimes). However, I comfort myself with the thought that Catherine isn't unintelligent, just young and inexperienced. I have faith in Henry's ability to kindly help her learn to think more deeply and critically.

Austen inserts a lot of sarcastic side comments mocking Gothic plot elements, like Catherine's father being "not in the least addicted to locking up his daughters" and her mother "instead of dying in bringing the latter [sons] into the world, as anybody might expect," still living on in inexplicably good health. But Austen also takes the time, whilst skewering Gothic novels, to make a few pleas to readers in favor of novels generally. And she creates one of her most deliciously shallow and hypocritical characters in Isabella, whose mendacious comments, along with Henry's sarcastic ones, were the biggest pleasure in this book for me.

When Catherine is invited to visit with Henry's family at the formidable Northanger Abbey, all her Gothic daydreams finally seem poised to come true. A mysterious heavy chest in her bedroom, with silver handles "broken perhaps prematurely by some strange violence"; an odd locked area of the house; a man she suspects of doing away with his wife. Gasp! Austen makes fun of it all, and Catherine's "disturbed imagination" along with it. Catherine repeatedly gets shot down and then makes firm although not necessarily long-lasting resolutions not to let her imagination run away with her in the future. But it seems likely that, in the end, she's gained some experience and wisdom.

Not to mention (view spoiler)[Henry.

Good fun! The 2007 BBC TV movie with Felicity Jones and JJ Feild takes a few liberties with the book's plot, but I still recommend it highly.

Random trivia: Watership Down uses the ending lines from Northanger Abbey as one of its final chapter heading quotes, in probably my favorite use ever of a literary quote for a wholly different yet completely appropriate context.
205 likes · Like ∙ flag

“Now I must give one smirk and then we may be rational again”
― Jane Austen, Northanger Abbey
tags: henry-tilney
122 likes

One of my favorites! :) How are you liking it?

Dominique wrote: "One of my favorites! :) How are you liking it?"

You know, I got about a third of the way through it a few years ago and then bogged down and quit, but I think if I keep the phrase "gothic parody" firmly in my forebrain I'll enjoy it a lot more this time. I'm only in Chapter 2, but so far, so good!

Hannah, if you're at all interested in trying Classics Bingo, you can join the group "Catching up on the Classics," or just go and take a look at the 2016 Classics Bingo thread. You can set your goal wherever you like, from 4 books (4 corners of the bingo card) to 24 (blackout). Here's the link for the group: https://www.goodreads.com/group/show/...

I've been trying to read more classics lately, so this is a good way to keep myself on track. I set my official goal for 12 classics this year but I'm going to give bingo blackout a shot. :)

This is my favorite of Jane Austen's books! It's less polished and much more sarcastic. I love it.

Ami wrote: "This is my favorite of Jane Austen's books! It's less polished and much more sarcastic. I love it."

Henry Tilney has some great lines, doesn't he? I'll probably always love Darcy best, but Henry might be second. He and Captain Wentworth are still fighting it out. Wentworth had a few issues, but he writes a pretty fine love letter...

Team Tilney vs. Team Darcy debates at the Jane Austen Society of North America Annual General meeting in 2010 got a little intense:

I personally do not care for his teasing. Wentworth will always be my favorite Austen hero.

Great review, Tadiana!! This is one of the Austen novels I've not read yet. Henry Tilney definitely seems like he deserves a read from me;)

Not sure if he can compare to Colonel Brandon though....

Oh, you'll love Henry, Jess. It's worth reading just to meet him (and the super-shallow, conniving Isabella). Henry makes sarcastic comments throughout the story, most of which fly completely over Catherine's head. She's sweet and earnest, but he's the character I adore.

I love it when we see a cheeky Jane:)

I confess I'm not a fan of animated GIFs in reviews, but somehow you persuaded me to "Like" this.
;)

Cecily wrote: "I confess I'm not a fan of animated GIFs in reviews, but somehow you persuaded me to "Like" this.
;)"

Thank you, Cecily! Sometimes I can't resist using them. :)

Fatty wrote: "Amazing review, Tadiana. I picked this up last year, but it didn't captivate me enough to go beyond a few pages. The promise of mendacity and sarcasm have changed my mind about it, though."

I tried it a couple of years and it didn't work for me then either. But this time I kept the phrase "Gothic parody" firmly in mind while reading, and it really helped me appreciate Austen's text a lot more. Try it again!

I looooove Northanger Abbey. And I think the recent film is pretty good too.

Love to read your views on the classics. Great review.

Jean, I don't love this book like I do a couple of Austen's others, but it increases in my estimation each time I open it. Maybe when I reread it sometime later it will take the last leap up to 5 stars. ;)

And thank you, Vicky! I'm trying to add more classics to my reading this year.

I worked my way through The mysteries of Udolpho as well as a couple of ohter novels (Camilla, Evelina Belinda) mentioned in Northanger Abbey and they made appreciate Jane Austen even more & can understand why she made fun of them. :)

Melindam wrote: "I worked my way through The mysteries of Udolpho as well as a couple of ohter novels (Camilla, Evelina Belinda) mentioned in Northanger Abbey and they made appreciate Jane Austen even more & can un..."

I thought really hard last year about reading The Mysteries of Udolpho but ended up not doing it. It's still on the "maybe sometime" mental section of my TBR list.

It certainly requires a lot of time and patience. :)

I read this last of all Austen's novels. Kept putting it off. Don't know why as it became an instant favorite with me. I agree with you about the romance between Catherine and Henry but like you think he'll be good for her.

I read Northanger Abbey last year for the first time and I was surprised by how much I enjoyed it. As you said, JA simultaneously poked fun at horrid novels and defended novel reading. Henry Tilney gives one of my all-time favorite book quotes: "The person, be it gentleman or lady, who has not pleasure in a good novel, must be intolerably stupid."

Lol, that's too funny. I'd completely forgotten that quote, but I love it.

I haven't seen the NA movie that the images in your review are from, but the actors for my beloved HT and Isabella are in line with my image of how'd they'd look. That's great when movie casting matches how you see a character from a book!

Andrea (Catsos Person) is a Compulsive eBook Hoarder wrote: "I haven't seen the NA movie that the images in your review are from, but the actors for my beloved HT and Isabella are in line with my image of how'd they'd look. That's great when movie casting ma..."

I'll see if it's for sale on Amazon!

Thanks Ana! ;) I love these sarcastic old classics.

Fun review Tadiana! I love the gifs you used from the movie. I really enjoyed both the movie and the book. Austen had a great sense of humor that I love seeing while reading her books, especially this one. I'm thinking it's time to reread them(and Jane Eyre) again.

I noticed that Pride and Prejudice fits in my 2017 Classics Bingo card, so I'm planning to read that in a couple of months. Emma will just have to wait. :)

Great review! Henry’s always been one of my favorite Austen characters. The 2007 BBC Northanger Abbey adaptation is definitely one of the best Austen adaptations I’ve seen.

I love that movie! In fact, I was never able to really get into this book until I saw the movie. It reframed the whole reading experience of Northanger Abbey for me.

Northanger Abbey was the last Austen book I read. I kept putting it off. It's now one of my favorites. I love the movie too.

Teresa wrote: "Northanger Abbey was the last Austen book I read. I kept putting it off. It's now one of my favorites. I love the movie too."

For me the Austen book I kept putting off was Lady Susan. It was more enjoyable than I expected in the end, but not quite up to the levels of her full novels.

I know what you mean Tadiana. I found the film disappointing too. Very slow.

NGL, this is my favorite Jane Austen book. :)

Nenia ✨ Literary Garbage Can ✨ wrote: "NGL, this is my favorite Jane Austen book. :)"

I still like P&P better, but Northanger Abbey keeps rising in my personal rankings. I just bumped my rating up to 5 stars. :)