ARC provided by author in exchange for an honest review

“Wyatt Caulfield just might be the strangest and most haunting person I’d ever met.”

An utterly calamitous beautiful story that will stir a whirlwind of emotions as S.D. Hendrickson douses her readers to absorb her stunning prose and heartfelt gritty story of love, forgiveness, and redemption!!!! Waiting for Wyatt consumes readers to the raw, gritty and tragic tale of living in your own personal prison.

“Wyatt have that type of hold on my thoughts. But I didn’t know how to shut it off or how to shut him out. Something pulled me to him. My heart said he needed me. And I might have developed a bit of a need for him too.”

Waiting for Wyatt is the first book that I have read from this author but I have heard so many amazing things about her debut book, The Mason List. So when I was given the opportunity to read this book, I couldn't wait to read Waiting for Wyatt and see why so many readers have fallen for S.D. Hendrickson's writing. And let me just say, Ms. Hendrickson has truly captured my attention as she delivered a raw and powerful read. 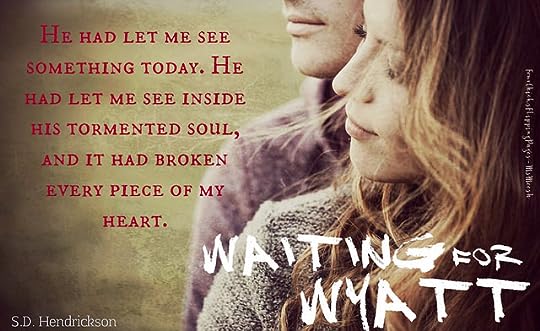 “My heart flipped a little, and I fell deeper for Wyatt Caulfield, the mysterious guy who said he was dangerous and bad.”

This book begins with the introduction of Emma Sawyer, who rescued an abused dog from the hands of her landlord. Emma knew she couldn't keep the pet because she technically stole the dog in order to save "Charlie" so she was sent by the shelter to bring the dog to Wyatt. When Emma arrives at the remote compound, where so many abused and unwanted dogs are nursed back to rehabilitation, Emma meets Wyatt Caufield.

“That girl had swallowed me with her big heart. She had wrapped that love around me until I felt her in my mind and my thoughts. She had consumed me, making the darkness disappear. She had made everything brighter, softer, and sweeter. She had made me feel alive again.”

There was something about Wyatt that drew Emma to him. He was an enigma. A man who lived alone with a bunch of rescued animals. A man who spoke so little but behind the hard exterior, Emma saw something. She saw a man who was troubled but at the same time, a man who had compassion unlike no other. Soon Emma found herself haunted by Wyatt and his mysterious personality. She couldn't explain the pull she had for him. She knew Wyatt was a man who was hiding and living in his own fear and prison just like the animals that he rescued. So can Emma break down the walls that holds Wyatt prisoner?

“Wyatt wanted me. He wanted me bad, and that desire scared him.”

When I thought I had the storyline figured out, Ms. Hendrickson surprised me with Wyatt's past. I loved that Ms. Hendrickson allowed readers to really see what an amazing heroine, Emma Sawyer is. She showed us a heroine, who didn't judge but saw a person for their heart. And I think that what drew me to really say what a beautiful person Emma Sawyer is. She was the key to unlock Wyatt's heart or in this case, the prison and cage that Wyatt thinks he belongs to be shackled to. Waiting for Wyatt is not a story of heart and flowers but instead this book begs readers to see that the road to redemption is not an easy feat. But taking the first step, will allow you to break free of the chains holding you down. There are no shortcuts to any place worth going and so Wyatt has to really search within himself to find the peace, forgiveness, and strength to escape his own personal chains.

Waiting For Wyatt is an exemplary story that was able to weave facets of grit, humanity, compassion, heart, hope, forgiveness, and second chances all into this stunning story. Though this book started off a bit slow, Ms. Hendrickson was able to hold me hostage till the very end with her deep and beauteous prose and storytelling. So if you are looking for a book that is brimming with raw emotions, heart, and love then I beg you to take a chance on this comely book that will steal your heart with its theme of humanity, compassion and second chances.

Sign into Goodreads to see if any of your friends have read Waiting for Wyatt.
Sign In »

Such a beautiful and insightful review. <3

Bianca wrote: "Such a beautiful and insightful review. <3"

Thank you so much, Bianca!!! xx Can't wait to hear what you think of the book when you start.

Fabulous review, Michelle! I'm so excited to get this one downloaded tomorrow. I loved her first book, The Mason List, & I am also pleased and proud to support a hometown author.

Anne OK wrote: "Fabulous review, Michelle! I'm so excited to get this one downloaded tomorrow. I loved her first book, The Mason List, & I am also pleased and proud to support a hometown author."

Thank you Anne, xo!! I haven't read the Mason List but after reading this book I need to bump up the the book on my TBR!!! Enjoy meeting Wyatt, tomorrow!