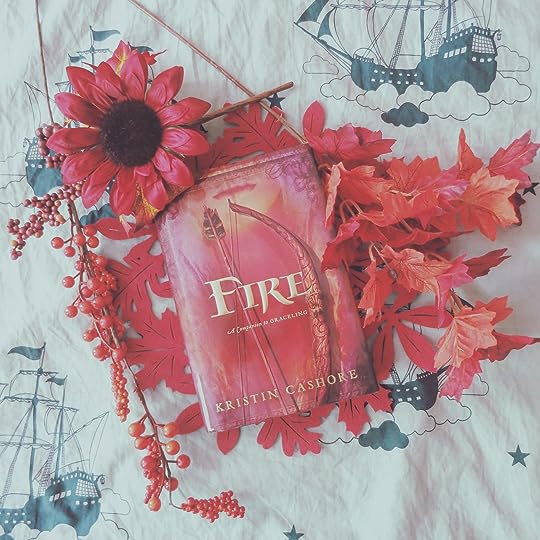 “The fire of Brigan's heart was astounding. Fire understood, and almost could not believe, that the feeling he was sending her was love.”

Every time I reread this book it really only manifests itself more as an all-time favourite. I love Fire as a main character, she is one of the most complex main characters with so many nuances and emotions to her. Brigan is literally one of the best, soft male love interests in the entirety of YA. And don't even get me started on the wonderful cast in general, or the world building, or the storyline, the political intrigue, the villain... I could go on and on and on.
I think this book, as this entire trilogy, is an absolutely masterpiece that was ahead of its time.

This sounds like such a good book, I might have to add it to my reading list...once I've finished all the other books I've not started yet lol

EJ wrote: "This sounds like such a good book, I might have to add it to my reading list...once I've finished all the other books I've not started yet lol"

hahaha I feel you, I feel you!!! I do really love this series though and think it's so worth it 💜

Lea (drumsofautumn) wrote: "EJ wrote: "This sounds like such a good book, I might have to add it to my reading list...once I've finished all the other books I've not started yet lol"

I haven't even BOUGHT two of the books I was most looking forward to this year. Added to which I've decided to re-read one of my favourite series as a kid (...only the 23 books to work through lol) once I've managed to finish off a Harry Potter re-read.

Boy, the only thing I overcomplicate more than my reading is my writing XD

Lol then you'll have to go learn