HEY, LOOK! I MADE A WALLPAPER OF THIS! Stop by the blog to download this and many more! 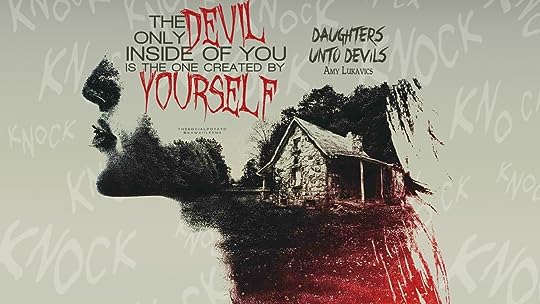 I may or may not have pissed my pants after reading this book.

Horror aficionados, come and meet your match . After reading Rin Chupeco's Girl From the Well and The Suffering, I've been on a frenzy hunt for the next book that would tickle my scary bone and leave me trembling in the night. I'm not sure if you guys know, but I  relish the feeling of getting scared. When my imagination goes out of control and when it feels like something is whispering to me or is floating beside me or is following me all because of a book - well, let's just say, I feel absolutely thrilled by it. Yes, it is probably weird, but no, I am not crazy. Baby, I'm just born this way, yo!

But let's face it, not every book has the moves to pull that off. I've read countless horrors through the years, but only a small percentage of them legitimately gave me goosebumps. Heck, I tried Nightfall not too long ago (a supposedly creepy thriller), and my eyes were halfway closed 10% into it. I tried R.L. Stine's FEAR STREET (in hopes his type of horror would work on grown-up me), but the most emotion it got from me was a 'harumph'. And a very indifferent 'harumph' at that.

And then, I read Daughters Unto Devils.

And, I reiterate, shit my pants.

What are you to do when the coming winter would be too brutal for your family to bear, and there's a praire in the far distance with abandoned houses where one could be your next homestead? Would you brave the blizzard and stay where you are, or would you take a gamble and up your chances of survival? But what if this prairie is more than what meets the eye...? What if this prairie is the home of whispers and secrets and mysteries, the kind in which horror stories are made of?

Welcome to Amanda Verner's life, the oldest of five children in a strict Christian family, who has live all her life up in the mountains. The previous winter, after helping her mother bear her youngest sister, Hannah, she saw the devil come to her, with its raging eyes and peculiar voice, calling her SINNER for her wicked thoughts. Everything changed since then, and things are going to keep on changing especially when her father announced they would be moving away to avoid the brunt of the storm.

Reading Amanda's narrative was a unique experience. Growing up with pretty hardcore Christian parents, she oftentimes spoke of how the Lord would not have wanted her sinner-like ways, and how she would burn in hell for her wicked thoughts (and trust me, some of 'em were pretty wicked). It was hard to appreciate her at first because I found many of her internal thoughts personally disturbing ("This boy had saved me from my Hell on Earth with the wonderful distraction that was his body" ->> wat) but later on, I found her to be an interesting individual stuck in an equally interesting family dynamic. She was constantly internally conflicted with what she was taught she should do and think with the things she actually does and think. She was frustrated with her life and how she felt 'stuck' in it, and how she was seemingly the black sheep in her family.

That's why when the horror elements came to play, it was so engaging (and nail-biting!!!!) to see how she and her family would cope with them. A multifaceted heroine in a fast-paced horror book?! Can that actually be possible?! This book proves that yes, it can be done, and it can be done very, very well. Throw in a Christian family and demons and devils in the middle of nowhere, plus a heroine who is still finding herself, and you have one pretty kick-ass and creepy book. This was a mix of quiet horror that plays with your mind and drives your imagination to overtime, and jumpy horror that makes you want to throw your book at a mirror (just in case) and run away screaming bloody murder.

There's no other way for me to review this book any further lest I go the spoiler-zone, which I absolutely do not want to do. Let's just say this book surprised me in many ways - it wasn't just the horror that was amazingly done and built-up (the crescendo going to the climax was spine-tingling delicious), but how certain scenes and endings played out. There were so many unexpected outcomes here that pretty much broke my heart and left me saying, "No. No. NONONONONONONONONOOOOOOOOO. YOU DID NOT JUST DO THAT, BOOK!!!!"

Sign into Goodreads to see if any of your friends have read Daughters Unto Devils.
Sign In »

you should try Demons of the New Year: An Anthology of Horror Fiction From the Philippines

this will surely creep you out

Not scary at all. Rather boring.

I found it quite funny actually. the 'horror' elements are so ridiculous I found myself laughing out loud. if yiu want creepy, read Adam Nevill's 'Last Days'.

I FOUND IT SCARY GUYS HUHUHU

I think I'll be reading this later..

I nearly marked this as lost interest because of some ridiculousness. But damn, Faye.... you got me wanting this again. Took me by surprise you ended up liking this xD

I nearly marked this as lost interest because of some ridiculousness. But damn, Faye.... you got me wanting this again. Took me by surprise you ended up liking this xD

YUP I NEARLY GAVE UP ON IT BUT I REFUSED TO BE BEATEN! AND HERE WE ARE, SCARED TO THE BONES.. WOOT!

I am totally bumping this up my TBR. To read on a nice sunny day. In the morning. While it's still light.