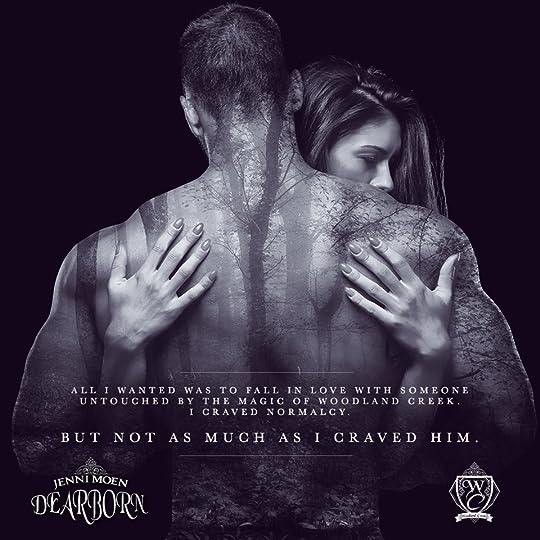 I think Jenni Moen nailed it with her spin on shifter/parnanormal romance. Dearborn blends reality with a truly magical place beautifully through solid characters and fabulous storytelling.
There's a place called Woodland Creek that holds more secrets than the average small town. Some people who live there are different. Willow Ryker is more different than most, feeling and seeing emotions unlike anyone else. And even though she loves everything different about her life and her town, she's craved something normal since she was a teenager. Something normal was really a someone: Woodland Creek's football star Quinn Dearborn. But it's not until years later that they wind up connecting in an unexpected way.
She feels the turmoil surrounding him, knows the pain of coming home from war, the sorrow of losing the life he's led for so long.
"We were a match made in heaven or hell, but I wanted him regardless."
Quinn's life is no longer his own. He struggles with returning to his hometown, with living. When he runs into Willow Ryker again, a spark of who he used to be appears, someone who hasn't been around for a long time. It's her kindness and beauty that make him stay, the reason he chooses to find himself again and possibly discover who he was meant to be all along.
"It was all because of her. Everything I was and everything I would become was because of her."
I really don't want to say more because I don't want to give anything away.
I was caught up in Willow and Quinn's world and didn't want to leave. It's emotional, mystical, and I just loved everything about it.
2 likes · Like ∙ flag