“ She was his. And he wanted her body and soul.”

If you are fan of rough, sexy, raw, intense and gritty MC romance novels then I highly recommend that you read the Sinner's Tribe Motorcycle Club series by Sarah Castille. In this dark and dangerous world of bikers, Ms. Castille takes her readers down a vivid and raw journey of bikers, rival clubs, and the fierce ladies who are willing to go beyond the means to protect and stand by their men. 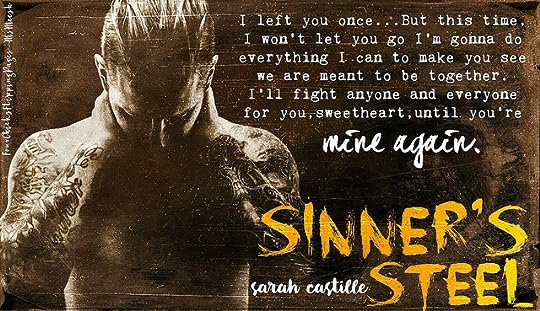 In this third installment, Sinner's Steel , Sarah Castille perfectly weaves a raw, gritty and intense perspective of bikers, MC clubs, and the code of brotherhood that these bikers live and die for. In this gripping and riveting tale, Sarach Castille immerses her readers in this all consuming complicated love story in the background of revenge, first love, second chances, loss, forgiveness, and chicanery. So when two former lovers are reunited and have their lives collide, can passion, memories, lust, desire and forgiveness be enough to reignite the sparks for a second chance at love? Or will the years separated forged two different paths in their lives?

“ I have always loved you. I've lived my life in the shadows because I couldn't let you go.”

Zane "Tracker" Colter, a VP for the MC club, Sinner's Tribe has been living the outlaw life for nine years. With a warrant for arrest back in his hometown of Stanton, Montana, Zane knew he could never go back. Accused for a murder he didn't commit, he has been living with a secret that he knows will destroy the woman he loves. Evie has always been the one. She owned his heart the moment he laid his eyes on her when he was 10 years old. Zane and Evie promised each other forever but when Zane suddenly had to disappear, she was destroyed. When Zane returned back for Evie, he was too late because she seemed to have moved on. So call it fate or what not, when Zane and Evie's lives collide nine years later, a possible second chance to reignite that love lingers. But what happens when Zane learns that Evie is now dating the rival MC president of the Sinner's Tribe. Can he just sit back and let Evie be with an evil man? How far will Zane go to get back the girl he lost? Can love conquer all? 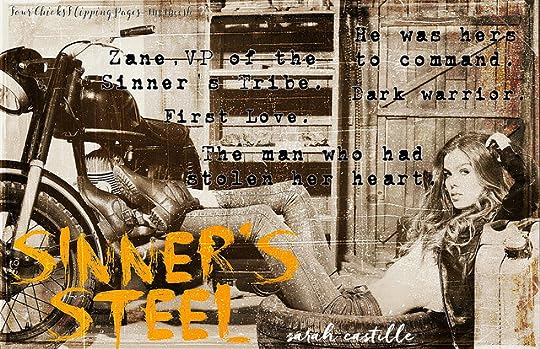 The sexual chemistry and bond that exists between Zane and Evie was sizzling and palpable. Their connection was the cementing foundation of what it means to sacrifice, honor, respect, and fight for your love. Though their love may be complicated, I loved how Ms. Castille kept their romance heated with passion as danger and doubts begins to surface. I loved how the author kept this book an MC trope but incorporated the elements of love, family, brotherhood, and second chances to be a forefront in the book.

“Mine before. Mine now. Mine always.”

Sinner's Steel was such an intense, raw, brazen and gritty perspective of the world of bikers and biker clubs. The writing was so gripping that you can't help but be immersed into the story as you await what danger, unexpected surprises and twist of events that awaits for Zane and Evie. This book is a reminder that although time may have pass, the memories and intense love shared between Zane and Evie remains. Though this book takes on a dangerous, rough, and brazen perspective of the lives of bikers, Ms. Castille was still able to paint a vivid and lively picture of two characters finding comfort, solace, forgiveness, and family with one another. Beyond the scars, heartaches, sadness, loss, and time lost, lies a story of what it means to truly protect the ones you love even if it means death. What I most enjoyed about this book was the raw tangible emotions coursing throughout the story. Every hurt, pain, heartache, loss, guilt, and hope were so palpable that you couldn't help but feel the strong connection for Zane and Evie. Your heart will ache for their happiness. With a hair-raising and fast paced story line that will keep you on the edge of your seats and blood pumping, Ms. Castille will take you on one dangerous ride where there is no turning back because once you read one Sinner's Motorcycle Club series, you will be a sinner for life. So if you are look for a book where intrigue, suspense, brotherhood, honor, passion, revenge, heartache, first love and second chances are all entangled in a sophisticated, sexy, and steamy MC Romance then I highly recommend you to read Sinner's Steel.

Thank you so much, Jen ❤️

thank you so much Sharon xx

thank you so much Peggy!!! If you love raw, intense, sexy MC books then I highly recommend you to check out this series!!!