“I think you’ll find, that where there is real love, there is always hope.” 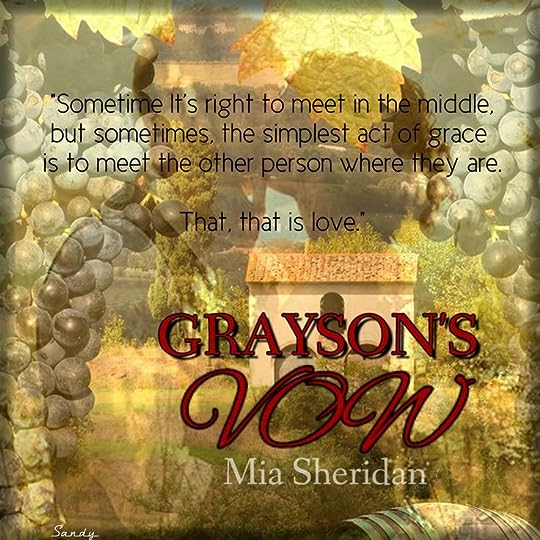 I don’t usually give away 5 stars easily, unless any book leaves a lasting impression on me. Reading Grayson Vow’s made me feel happy and content for a long while after finishing it. It’s a kind of story you have read before but the way this author has put together the real life characters with their emotional struggle towards the path of love and life was both beautiful and full of hope. Mia’s books have a power to uplift your mood and snatch you away to a magical land of colourful life, which you never EVER want to leave!

This one won’t be like my usual way of reviewing, In fact, I made an attempt to write this story as a fairy tale version. Ok! Here it comes, please don’t throw those rotten tomatoes yet!!

Once upon a time in faraway land of grapes called Napa valley lived a little boy named Grayson, at a very young age his father detested him and his stepmother never accepted him. He became the reason they fought constantly as a result he was mistreated by them. As seasons passed and when Gray became older the very hope of being loved by his father was shattered when he was sentenced to prison for the crime he never committed and during that time he receives a news of his father’s death. But when he returns home he sees no sign of his stepmother and brother to whom his father left a large chuck of fortune and to Gray his legacy and pride “the Vineyard”.

Grayson vow‘s to carry on his father legacy and to prove himself as a worthy son, but faith was cruel to him since, he was a social outcast and the very land he vowed to save was rotting day after day. Being rejected by the society where no one seems to help him, Gray grows cold and distant. Being hopeless, after harbouring so much pain and rejection his heart turns out be ice cold transforming him into a fire breathing Dragon.

Meanwhile in another land of kings and corruption, lived a beautiful princess named Kira, she lost her mother at quite a young age and her father never gave his time or love to her as he was busy being ruling his kingdom. However, growing up as motherless child didn’t stop her from being kind, brave and strong. She was such an enchanted little princess that everyone in that kingdom were bewitched by her kindness and selflessness. When Kira turned eighteen she was forced to marry a prince of her father’s choice and not for love, she runs far away from her kingdom, away from her manipulative father while she is cursed to become a witch.

After wandering around for a long time she comes into the land of grapes, where she finds an abandoned castle with a sole creature living within. The witch comes up with an idea to get away from her misery and never to depend on her father again, even though this might involve seeking help from this ruthless dragon. The witch musters enough courage to finally confront the dragon and put forth her plan. As absurd as it sounds to dragon himself, this looks like the only way to save his land and make it thriving again when the little witch casts her spell on his land.

What happens when these two head strong, stubborn feisty creatures enter into a business arrangement, and will this agreement mend their broken hearts and make them whole again??

“...love is not always smooth and easy. Love can be piercing. Love means exposing yourself—all of yourself, every tender part—to being hurt. Because true love is not only the flower, true love is also the thorns.”

*Sighs* sounds like a perfect Disney tale right?! I might have exaggerated most of the things but those who already read this book will agree with me *winks* I may not be a good storyteller but if you liked the above described story and if you are crazy woman who still loves at this time and age (like me!!) a good heart-warming, alluring fairy tale then this book is definitely for you!!!

Duh... It’s Mia Sheridan’s book people!!!! I even had tears while reading her acknowledgement....that’s how much her words affect me everytime I read her books.

♥P.S: Archer Hale you are still my favorite man, but this will be my new favorite Mia book♥

Enjoy Hun!!
And did you join Flo's Blog!??
Congrats!!
xoxoxo

Yet to start this book hun!
Yes, I did!! Thanks Patty! xo

*squeeeeeeeeeeee*
I can't wait to read your review, babe!! *smooches*

Magical review Sandy! I love Archer Hale just as much as you do but we can share him, LOL!!!

Dee wrote: "Magical review Sandy! I love Archer Hale just as much as you do but we can share him, LOL!!!"

haha! Sure sweetie;) I'm happy that this was a magical read for you too!xo

Wonderful Sandy! Glad you enjoyed it so much!xoxo

Eliza wrote: "Wonderful Sandy! Glad you enjoyed it so much!xoxo"

Beautiful review Sandy. I'm curious about this one but I think I need to be in the correct mood to start it.

Lovely review sweetie!! :D ♥ I'm so happy you loved it too!!

~ Stéphanie ~ Belgian Naughty Reader ~ wrote: "Beautiful review Sandy. I'm curious about this one but I think I need to be in the correct mood to start it."

Thanks babe!:)) Oh yes, this requires a good mood!! so many things can go wrong if you are not feeling it!

Jasmine wrote: "Lovely review sweetie!! :D ♥ I'm so happy you loved it too!!"

It has! Miss you! xoxo

Wonderful review, Sandy! So happy you found yourself an amazing read. xx

Thank you Christie!xo :D Best read in a long time;)

great review Sandy! i gotta get to this one!

Sharon ✽ is an emotional book junkie ✽ wrote: "great review Sandy! i gotta get to this one!"

You wont regret it!;) Thanks Sharon :D xo