Finally finished this and I would have sooner but I'm such a slave to my Kindle and had this in paperback. James Stark (Jimmy/Sandman Slim) is back from Hell and out for vengeance. He is going to murder the dark magicians who killed him and the love of his life. If only she had been as hard to kill as he was.

Being back in LA takes some getting used to and Jimmy meets new friends and reunites with old ones. There are some racist skinheads, a recovering vampire addict (Candy is awesome, but she had to give up drinking blood from the source because going vamp in this world means you pretty much go psycho and Candy would rather not lose herself in blood lust).

Allegra is the chick who works at Maximum Overdrive (video rental/porn store). Vidocq is the bad-ass magician who takes her on as an apprentice and is one of Jimmy's old friends. Kinski is the doctor who whips up Candy's vampire shakes and performs magical surgeries.

Throw in a lot of demons, including Satan himself, some semi-angel/demons who feed off fear, some actual angels, and a secret government-type group helping the angels, and this is a darkly funny, entertaining urban fantasy that is extremely well-written, sarcastic, and even a little nostalgic. 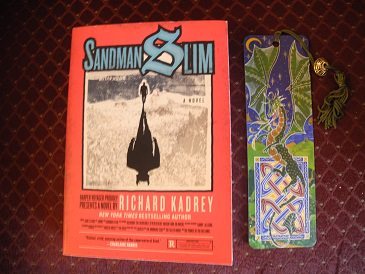 Buddy read with the MacHalos. New book and bookmark from B&N. #BirthdaySplurge :))
41 likes · Like ∙ flag