it was amazing
bookshelves: own, horror-gothic-etc, favorites 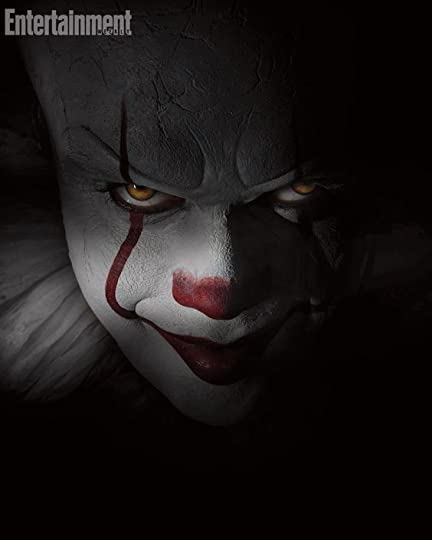 Hello, welcome to Derry.. I'm Pennywise the Clown and at some point, especially if your a kid, I will eat your face off! Have a nice day!

The first time I read this book was in the 6th grade and I had forgotten how good it was! I loved the movie as well, but the book is so much better!

I love how Mr. King goes back and forth from when the friends were kids and to them as adults and what they do in life now, while they are on their way back to Derry. See, when they were young and all became friends, they made a pact that if "IT" ever came back so would they.

Bill's little brother Georgie was the first one to be.. um.. eaten... by Pennywise. I'm sorry, I don't care how old I am, if I saw a creepy clown down in a drain-gutter thingy (leave me alone, I forgot the name!) I would have ran until I fell over! I mean..no..no...no.. and NO! 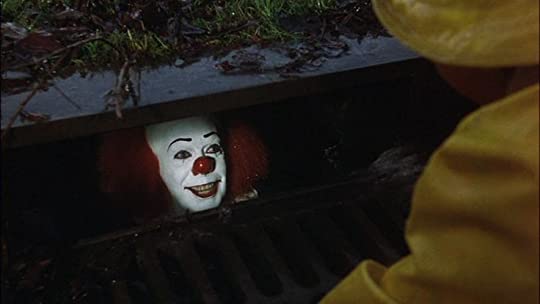 Bill, Eddie, Ben, Richie, Stan, Beverly, and Mike are all friends. I love each of their separate stories and I love their friendship together. They are all picked on by the town bully/jerk named Henry Bowers, but when they are together Henry can just go on down the road when the little group gets their courage and attacks Henry and his gang.

I love the camaraderie between the friends and how they believe each others stories of meeting Pennywise, even when he wasn't in clown form. They didn't ridicule each other, they watched out for each other the best they could. 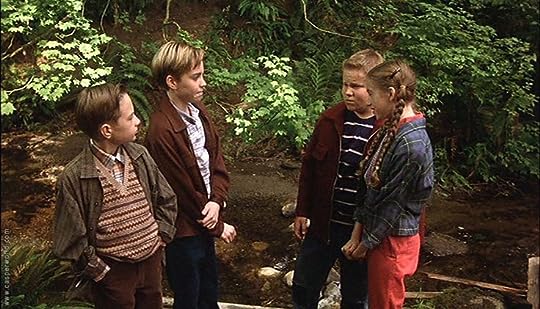 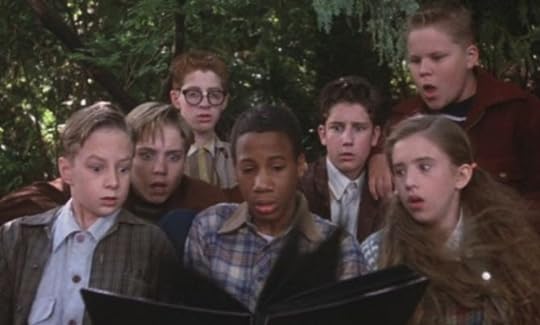 At one point they think they kill ole Pennywise, but after many years and the killing of kids starts happening again, Mike, who stayed in Derry at the library, calls everyone home. It's weird how they all forget anything that ever happened to them until they get that phone call. It's like they were made to forget.

And there is sweet Pennywise to welcome them back! Uggggg, clowns!!!!!!!!

I know there are some people out there that hasn't read the book so I won't give out any spoilers for them, but one of the group commits suicide before anything even gets started and another of the group gets killed before they kill Pennywise for good.. or is IT really dead? I think Mr. King should bring him back with a whole new set of peeps that have to take him out :) Yes, I'm not quite right in the head!

This is a very long book to read, but you know good books like this one really doesn't matter the length, when they are written very well, it just doesn't seem like a tome. Well, with the exception of holding the book up if you have joint issues, just let it rest quietly on your lap tray while you read :)

I didn't get bored not one time in this book, I did, however want to shoot a few people and of course Pennywise... but I digress.

At the end Mr. King wrote:

That's a good amount of time and would explain how freaking good the book was in all of the detail. The detail was just awesome! 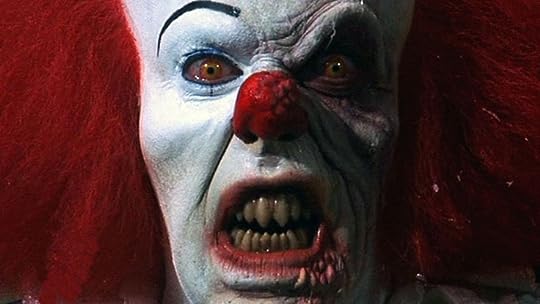 I loved it when I read it in 6 th grade. Many moons ago 0_0. I'm hoping to read all of it in Oct. I have so many to read. Sigh... I wanted to read a bunch of scaries but the time flies too fast!!

Wow! I hope you enjoy it just as much now. :) I Know how that goes! I wanted to do a bunch of scary ones myself, but you're right time flies so fast!

I know :-(. It's my favorite month and Halloween is my favorite day! I did read some good short stories that were scary on Oct 1st :-) I might just extend Oct into Nov and try to get some more creepies in :-)

It's my favorite month too!! I love all things October and spooky. I love this idea of carrying it over into November. I may have to try and do the same. Great idea!

Yay! Another October lover :-). I think we have to carry it over, it's gone so fast we need two whole months of it :-(

Melissa wrote: "Yay! Another October lover :-). I think we have to carry it over, it's gone so fast we need two whole months of it :-("

I'm with yo both on this one. This is my first October scary read ever and it's been great, but tooooo short! I read IT as well. It wasn't what I was expecting but I ended up giving it 5 stars. Great gang of kids. Great book!

I will be reading on this one awhile since I like to read more than one book :-)

Melissa wrote: "I will be reading on this one awhile since I like to read more than one book :-)"

It's quite a chunk to read, but worth it... the detail is part of the charm.

I didn't realise IT was so long until people started commenting. I was reading on my kindle and didn't notice the page count! It LOOKED just as short as any other book! :)

It sure is and I hope to get it done before end of year :-)

yeah get a move on!

It just solidified my terror of clowns!

LOL! Thank you :) I know right! I almost couldn't add the pics!!!!! I just wanted everyone to have clown nightmares :)

I know, I looked back up there and especially the last one and thought.. I'm mean :D LOL and I don't want to look at it again for a bit! Clown nighmares..nooooooo

This movie, scared me and I never looked at a clown the same again.

I know right! I watched it twice a couple of weeks ago. I'm not sure what I was thinking. LOL

So it took him 4 years to write it. I guess no master piece comes to life over night!
Great review! :)

Thank you hon :) Yeah, can you imagine writing a tome like that overnight. LOl

You have to read it hon! It's so good, the whole story line is awesome! ♥

Great review. I would love to see a re-make of this movie. The original just didn't do justice to the novel.

Thank you Wayne! Yes! I would love a re-make of the movie too! We need to send it out into the world and hope they will listen!

Wahoooooooo! I want to see It! Thanks for the heads up :)

Fantastic review! I am currently reading this book and love the individual stories of each of the children. Mr. King is doing one awesome job with this monster of a book. :)

Thank you. I agree whole heartedly!! I'm so glad your enjoying it. I loved all of their stories. I'm going to have to do a reread again in the future :-)

Melissa wrote: "Thank you. I agree whole heartedly!! I'm so glad your enjoying it. I loved all of their stories. I'm going to have to do a reread again in the future :-)"

Sounds good. I hope you enjoy it then again, or even more :)

Thank you :-). I watched the movie again after I read the book, it's not as good of course but it brought me back to the good ole creepy days. :-)

This is and will probably remain my favorite SK novel. Of course it's possible that he may revert to writing AWESOME books again....

I love this book so much and I can't wait to watch the new movie. That is if I live that long and then I have to wait until it goes to video! Whyyyyyyyyyyyyyyyyy!

Melissa wrote: "I love this book so much and I can't wait to watch the new movie. That is if I live that long and then I have to wait until it goes to video! Whyyyyyyyyyyyyyyyyy!"
Ummm, I guess you don't go to theaters? The last movie I saw in a movie theater was "Nightmare on Elm Street 2" in 1985 or '86.

Wow! Well, mine was in 2008. Some things happened and I have been home bound since then. Life is what it is....

Yeah, this is true. I'm pretty much that way too, but it's more by choice in my case.

I miss hiking and being normal-ish. But it is what it is

My wife and I used to do a lot of hiking, but between mosquitoes, ticks, and getting overweight I don't do much anymore. I would if I could hike in the desert or in the Rockies.

If I didn't have my issues I would be hiking in the woods every day like I used to do with my dog. Oh well. Life is cruel.

I'm not a big fan of Stephen King but I loved this one. I should mark this Read and rate it here in GRs. Fab review, Mel.

You're a brave lady, Melissa! Great review! I'll steer clear of the creepy as hell clown! :)