Michelle's Reviews > Beyond the Cut


If you are a fan of raw, gritty MC books, then I highly suggest you to read Beyond the Cut by Sarah Castille. In this dark and dangerous world of bikers, Ms. Castille was able to lure and engross her readers in this raw and captivating tale of bikers, rival clubs, and a mother's fight to protect her children from their monster of a father.

"What's mine is mime and I shall strive to protect it the best of my ability." ~Sinner's Tribe Creed

In this second installment of the Sinner's Tribe Motorcycle Club, it chronicles the tale of Dawn Delgado and her pursuit of getting her children back from her ex-husband, Jimmy "Mad Dog" Sanchez. Jimmy is nothing but a monster, who abused Dawn for years and wants nothing to do with his twin daughters. He just kept the girls away from Dawn in spite after she decided to divorce him. Dawn wants nothing but to get her babies back. But that was easier said than done since Jimmy was able to manipulate and pay people off in helping him gain full custody of the girls. When Dawn's outlook seemed to dim without any hope in sight, another outlaw biker from a rival club called the Sinners showed her that he will come to her rescue. Cade “Ryder” O’Connor was the man Dawn needed and wanted. He showed her true compassion, love and passion. Cade wanted nothing more than to protect Dawn and her baby girls. So with danger and a war brewing between the rival clubs, how far will Cade go to protect the ladies in his life? Beyond the scars and heartbreak, can Dawn open herself to let love in once more? 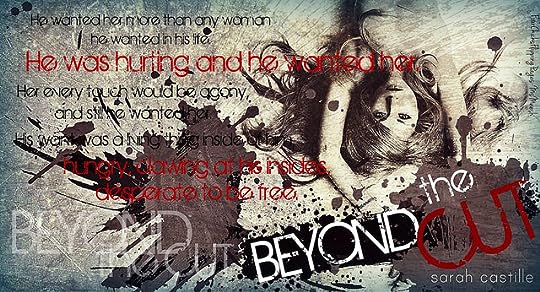 Beyond the Cut was such an intense, raw, gritty perspective of the world of bikers and biker clubs. The writing was so gripping and riveting that you can't help but be immersed into the story line as you await what danger and unexpected surprises awaits for Cade and Dawn. What I enjoyed about this book was that Ms. Castille was able interspersed a raw, brazen, gritty, steamy love affair of two characters finding hope, solace, and comfort with one another. Beyond the scars, cuts, heartaches, loss, and sadness, lies a story of what it means to go beyond the means to show how deep you would go to protect the ones you love even if it means death.

So if you are looking for a book that is dark, gritty, bloody, and action packed then look no further than Beyond the Cut by Sarah Castille. Ms. Castille will have you beyond amazed on her raw and yet sexy writing and story-telling.

Sign into Goodreads to see if any of your friends have read Beyond the Cut.
Sign In »

I am reading this one too! Interested to hear your thoughts!

Elizabeth wrote: "I am reading this one too! Interested to hear your thoughts!"

Oooh. I just finally sat down and started reading. How far are you in the book? Will definitely keep you updated with this book.

Michelle wrote: "Elizabeth wrote: "I am reading this one too! Interested to hear your thoughts!"

Oooh. I just finally sat down and started reading. How far are you in the book? Will definitely keep you updated wi..."

I finished it yesterday! I really wanted to read more about Jagger and Arianne so I read that today! Amazing!

Oooh. I just finally sat down and started reading. How far are you in the book? Will definitely ke..."

I need to go back and read the first book of the series and read about Jagger and Arianne!! =)