Sheyla ✎'s Reviews > Under the Lights 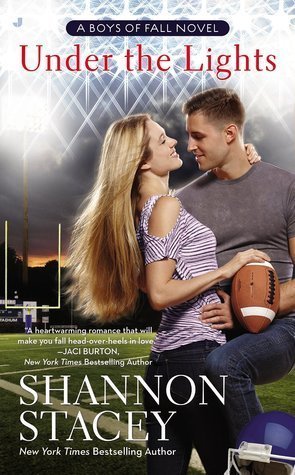 Chase Sanders is loosing it all. His girlfriend is gone. His business is tanking. He needs a distraction. When he gets a call from Coach's daughter he can't refuse a trip to his old town to help the high School football team survive.

Kelly McDonnell had a crush on Chase Sanders as long as she can remember. He never looked at her like anything else than Coach's daughter. Facing him again after fourteen years -and a failed marriage- is the last thing she needs but Kelly and her friends will do anything for the kids and their town, including facing her past.

Chase's first encounter with Kelly is not the best scenario but Chase realizes that she is all grown up now and he's having a hard time staying away from her. Too bad his life is in New Jersey.

Great start to the beginning of the Boys of Fall series.
Kelly was a strong heroine with a great heart. You could feel how much she really cared for the kids and the town. She never forgot Chase and she had a hard time admitting it for while.
Even though Chase was in a low point of his life, coming back to his roots made him realize how much Coach helped him as a kid and now he wants to pay it forward helping a new generation.

I liked the secondary characters and I'll definitely read the next one in the series.

4/5 Fangs
A complimentary copy was provided by the publisher via NetGalley in exchange for an honest review.
MrsLeif's Two Fangs About It
Facebook
Twitter
Like ∙ flag

Sign into Goodreads to see if any of your friends have read Under the Lights.
Sign In »