Authors of series like to do this thing where they give you a first installment that while, of course, leaving unanswered questions, still manages to conclude nice and neatly.

You can't wait to get your hands on the next book, but only b/c you love the story and are desperate to see what happens next.

You feel safe when you finally get the next chapter.

The tension that plagued you while reading the prior installment, coming ever closer as you neared the end, like footsteps speeding up behind you, making you curse your stupidity for taking a walk alone at night in an unfamiliar city . . . That tension isn't there.

You've developed a trust, a camaraderie . . . an understanding with the author.

You have been duly warned.

When we last left Lila and Kell, they were parting ways. We were sad, but we expected no less. After all:

Lemme tell you, people--it gets WORSE.

Lila, on the other hand, is having the adventure she's always dreamed of. On a PIRATE ship. *coughs* I mean, privateer ship. She got her position by killing another crew member. *shakes head at Lila* Buuuuut it turned out they didn't like the fellow much anyway, so it all worked out.

A little too well, actually.

Lila develops a sort-of friendship with the captain. She earns the respect of the crew. Worse, she begins to feel like she herself is a true part of the crew.

So when Captain announces his intent to return to Red London and participate in a prestigious wizards' tournament, Lila decides that she won't be going with them when next they leave.

But not for the reasons she anticipated.

You: WHAT DOES THAT MEAN?!

And that's just the tip of the iceberg.

Things happen in A DARKER SHADE OF MAGIC, and those things have CONSEQUENCES. CONSEQUENCES that you will not believe until you see them for yourself.

What does it mean that Kell's life is now tied to another's? What will happen now that a living being from Grey London has permanently crossed over into Red London? And what would you say if I told you that you only think you've seen chaos in White London?

Last year, A DARKER SHADE OF MAGIC made my Best Books of 2015 list. This year, A GATHERING OF SHADOWS is already a strong contender for the #1 spot. If you have yet to check out Schwab for yourself, what are you waiting for? The woman is GENIUS. This world and the characters that populate it are one of the most unique I've encountered in ages. I love it. Even as I'm screaming at Lila to THINK before she acts. For once. Even as my heart is breaking for Kell, b/c he can longer ignore the charade of his circumstances. Even as all the Londons hover on the edge of DOOM . . . I love it.

My other reviews for this series:

Sign into Goodreads to see if any of your friends have read A Gathering of Shadows.
Sign In »

“She had her eyes on one ship in particular, had been watching, coveting, all day. It was a gorgeous vessel, its hull and masts carved from dark wood and trimmed in silver, its sails shifting from midnight blue to black, depending on the light. A name ran along its hull—Saren Noche—and she would later learn that it meant Night Spire. For now she only knew that she wanted it. But she couldn’t simply storm a fully manned craft and claim it as her own. She was good, but she wasn’t that good. And then there was the grim fact that Lila didn’t technically know how to sail.”
― V.E. Schwab, A Gathering of Shadows
12 likes

“All right,” she said. She got to her feet and crossed to his desk, where her knife still sat atop the maps. She thought of the way he’d plucked it out of her grip. “But I want a favor in return.”
“Funny, I thought the favor was allowing you to remain on my ship, despite the fact you’re a liar, a thief, and a murderer. But please, do go on.”
― V.E. Schwab, A Gathering of Shadows
26 likes

“What do you want to know?”
Lila returned to the chair and leaned forward, her elbows on her knees. “Everything”
― V.E. Schwab, A Gathering of Shadows
19 likes

“Kell would say it was impossible. What a useless word, in a world with magic.”
― V.E. Schwab, A Gathering of Shadows
232 likes

“Most girls covet dresses.”
“I am not most girls.”
― V.E. Schwab, A Gathering of Shadows
31 likes

“She bent most of the rules. She broke the rest.”
― V.E. Schwab, A Gathering of Shadows
571 likes

I completely agree with you - this book took me by surprise and in the end this sequel became one of my most anticipated read of 2016 too. I didn't read the preview because I'm OCD with them, I can't do it for some reasons but GAH. I NEED IT.

LMAO NOOOOOOOOO. THE STRUGGLE IS REAL.

It's just . . . There's like . . . SO MUCH. I think the preview is a good 20+% of the book. Something would happen, and I'd be OHMYGAWD, then something else, then SOMETHING ELSE. Seriously, some of the stuff that happened in book 1, I didn't even think about in terms of consequences, but. There. Are. So many. CONSEQUENCES.

YAAAY! I keep stalking NG because I remember that last year the preview stayed on Read Now a long time before they finally put the book to request (perhaps a month prior to release?).

Consequences are the BEST. I hate when stuff happens and is forgotten after, it's such lazy writing. Really glad that's not the case here.

I am super excited for this book and I like that a lot of publishers are doing previews of upcoming books instead of ARCs. I still get a taste of the books that I'm anxious to read, but cracking open that brand new hardcover for the first time is still a thrill.

Alienor ✘ French frowner ✘ wrote: "YAAAY! I keep stalking NG because I remember that last year the preview stayed on Read Now a long time before they finally put the book to request (perhaps a month prior to release?).

So not the case. I'm stalking NG, too. If I see it go up, I'll let you know, and if you see it go up, you let me know. #basescovered

Jenn wrote: "I am super excited for this book and I like that a lot of publishers are doing previews of upcoming books instead of ARCs. I still get a taste of the books that I'm anxious to read, but cracking op..."

I hear you, but I'd rather have it ALL right NOW ;) #instantgratification

Thank you, thank you! *SQUEE*

ALRIGHT ALRIGHT. NOW I AM SCARED!! 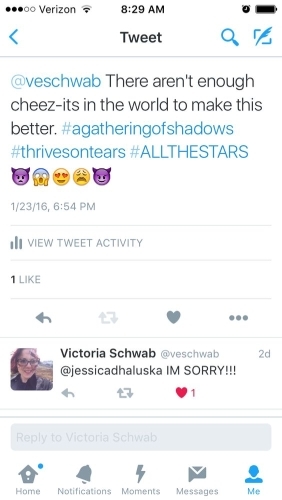 Not enough cheez-its? O.o
Sounds intense . . . I'll have to check the first one out. Awesome review, Jessica!!

Honestly, I love reading your review, Jessica !! Sometimes it's better than the book !

I'm trying to save this for a time I really need a good book but it's so hard when your review makes it sound so enticing!!! AHHH

P.Z. wrote: "Honestly, I love reading your review, Jessica !! Sometimes it's better than the book !"

Not better than this book, I PROMISE. But thanks ;)

Hetal wrote: "I'm trying to save this for a time I really need a good book but it's so hard when your review makes it sound so enticing!!! AHHH"

this. this book is too perfect ♥

oh gods, I should have waited longer.

Paige wrote: "this. this book is too perfect ♥"

Too perfect and TOO CRUEL. *wails*

Hetal wrote: "oh gods, I should have waited longer."

I have deliberately been putting off reading this until closer to the release of book 3. The struggle is real between my finger and the "buy now" button on my Nook!

I loved #1 so much that I read it TWICE last year...April and November.

After reading your review, I don't think I can wait ANY longer...everything else is just methadone, feebly staving off the next fix!

I have deliberately been putting off reading this until closer to the release of book 3. The struggle is real between my finger and the "buy now" button on my Nook!

That is some colorful imagery, Jennifer. I'm convinced that you have a legitimate book addition.

There are worse things. 😉