FOUR AND A HALF STARS! 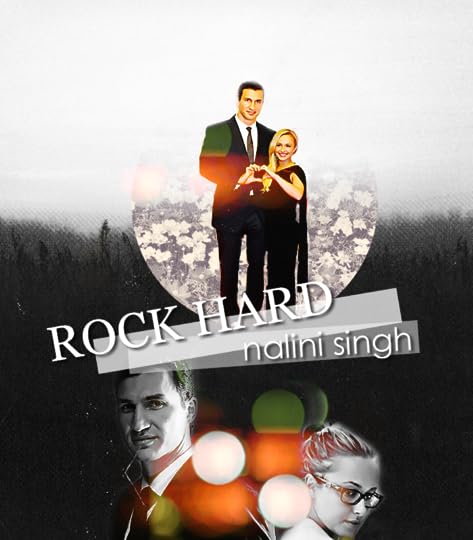 So, I totally have a weak spot for gingers. Who can sing. And play mad things on his guitar.

Totally not relevant to this review. What is relevant is that this is an amazing story and I think Nalini Singh has been peeking at my Christmas list because it had all the things that I love, not only in a hero but also in the story that enfolds said perfect hero.

Rock Hard is ultimately a story of resilience, of learning to cope when you've been stuck in a certain attitude for far too long, of a little mouse who manages to turn a T-Rex's life upside down. Charlotte Baird has suffered through horrific events that no woman should ever have to go through in her life. As a result, she has learned to protect herself as best as she knows how, living a sedate and uninspiring life that lets her feel safe. Life as she knows it changes radically when Gabriel Bishop, former rugby player turned CEO shark, takes on the company where she works at in the hopes of saving it from bankruptcy. He's pushy, determined and resourceful, exactly what the company and Ms. Baird needs to change the current outlook of their futures.

First things first, Gabriel is a bloody beast. He is the perfect combination of growly man beast with such a strong sense of loyalty and love for family that I couldn't help but salivate over him. Not only is the bastard a sneaky devil but he's such an absolute charmer that you can't help but be swept away by him.

Charlie on the other hand is such a loveable character. She's naturally shy so seeing her bloom and slowly come out of her shell with Gabriel had me rooting for her, not only to find happiness but to overcome the jagged pieces of her psyche left by a sorry excuse of a human being. My heart felt for her and I was proud to see her struggle so fiercely to stand on her own two feet and not be defined by what was done to her.

My absolute favourite thing about this book was the hilarious banter between the two mcs. They were just so hilarious together that I was left wishing for more.

"Ms. Baird, you sound breathless again." Gabriel's deep voice went straight to her nipples and the slick folds between her thighs. "Did I make you run to the phone?"
"No, I'm in bed," she said and barely bit back a groan at what she'd revealed.
"Ah. And breathless." His voice dropped. "You better be alone or we'll be having a very interesting talk the next time we meet."
Her skin grew tight at the rumbling warning. Inhaling jerkily, she said, "Of course I'm alone."
"Then the breathlessness becomes far more intriguing."
Charlotte pulled up the sheet to cover herself, feeling exposed even though he was on the other end of the phone line. "I was just... doing something."
"Good, keep doing it. I want to hear you do it."

Oh, and on another note, I have to make mention how positively pleased I was about the positive portrayal of Polynesian people in this book. It's rare to see people like me in books (which I have no idea why since we very much deserve love as well, lol) and I haven't been impressed in the past, so I was glad to see it work for once in a book.

Overall, this book was top notch for me. I would definitely recommend this read for those who love a bit of a slow burning office romance filled with laughs, strong women, and a sinfully tasty beast who doesn't know the meaning of quit.

Rock Hard is part of a series and should be read in order for maximum enjoyment:

I'm off to see Ed Sheeran tonight so review to come when I'm not feeling so lazy.

On a side note, props to Hayden for willingly getting pregnant by this guy. He looks like a beast. ;D
29 likes · Like ∙ flag

Bahaha! Have a blast friend ;)

P.S. He has a brother. They look so similar.

OMG ED SHEERAN OMG! He was just here the other day *flails* ENJOY BESTIE!! ♥♥♥ And beautiful graphic as always!!

Have a wonderful time at your concert Penelope..I will be waiting to hear how it went when you get back!!! LOL

Jen wrote: "Have a wonderful time at your concert Penelope..I will be waiting to hear how it went when you get back!!! LOL"

It was the beeeest! That guy is wickedly talented and I'm convinced that he was singing to me about falling into my loving arms, lol.

I know! I saw pictures and was astounded by them, lol.

Woot! So glad you enjoyed the series, Penelope! This book is my fave. :D

Awesome review bestie! :D ♥ Gah them rockstars! *flails* So glad you're enjoying this series! And Ed sheeran too!! :D ♥♥

I know! I saw pictures and was astounded by them,..."

I really did! I'm hoping Abe and Noah's books are even more awesome. <3

Thanks, bestie! <3 Hahah, I think I was enjoying Ed Sheeran alot because of this series. XD

Bwahahha. Dammit, there's no way I could not take that another way. ;D

Awesome review Penelope. It sounds perfect. Can I start with this book? Thanks dear. = ))