The Story
Three Australian models (Bruce Virgil, Bruce Owen, and Bruce McCoy) arrive at LA for an underwear photoshoot. Our narrator, Gary collects them at the airport, and escorts them to Ojai. The photographer is Duke, his assistant and lover is Clyde. Just to be clear.

All of them are gay, but Bruce McCoy (aka Bruce Three) doesn’t know it about himself yet.

“I got hired because I have a huge dick.”
“Excuse me?” I was so startled, I almost rear-ended an SUV.
“The photographer…what’s his name? Duke? He asked me for a nude photo. Wanna see it?” he asked. “Not here or anything. You know, later. In the loo, maybe.”
If he was straight, why was he so eager to show me his cock?
“Good for you.” I felt this was the safest response. “Not that I’m a size queen or anything.” Oops. I’d just told them all that I was gay.
“They’re poofs, too,” he said, jerking his thumb over his shoulder. His voice grew louder. “I am not.”
“Really?” Bruce One asked. “Then why did your cock get so hard when I rubbed your crotch on the plane?”
“I was asleep. I was dreaming of my girlfriend.” Bruce Three had darkened to a frightening shade of plum.

In less than 24 hours, from that he turns into this:

“Gary, I can see you… sitting on my lap, my cock deep in your arse. I want to fuck you, Gary. I want to explore all of this… being gay… with you.”

Ooh, about that M/M/M/M thing: Virgil, Owen, Duke and Clyde are fooling around a little. Not really worth to mention.

The scene with that fish hook is so unbelievable, I can’t even word it.

And the thing (no better word for it) started between Gary and Bruce Three – what was that?

And what the heck was that with the tractor? Really?? An architect driving a tractor?? I’ve never been in Australia, and I haven’t met any Australian, but I can’t believe that there are people who actually believe Australians don’t drive a car, but a tractor. 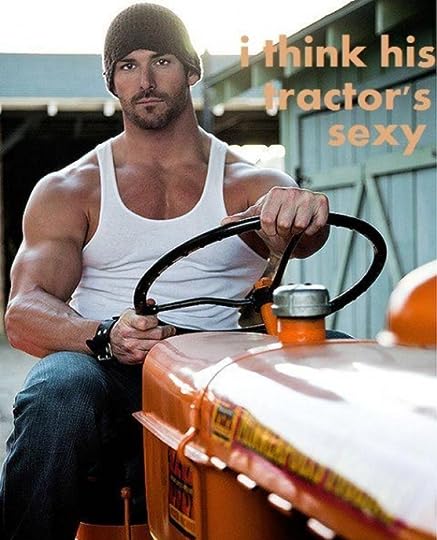 Bruce is an architect but he seems retarded.

“I’m an architect.”
“Really?”
He laughed. “Yeah. But what I really want to do is model and act. Hollywood’s a good place for that, isn’t it?”

Please, someone tell me it is a parody. But it is bad even for a parody. A parody supposed to be funny, right?

Okay, there were some laugh-out-loud moments at the beginning, but the rest…

Sounds good to me! Hope you're loving it!

Hahahaha!! Oh wow, Exina, I don't think I could do this one, but bonus points for not quitting ;)

Jessica (Rabid Reads) wrote: "Hahahaha!! Oh wow, Exina, I don't think I could do this one, but bonus points for not quitting ;)"

Thanks, but it was short! :D

SueBee★bring me an alpha!★ wrote: "Sorry it missed the mark Exina! = S"

Lol, I think people ride tractors out in the bush? Cause that's where all the farmers are, lol.

WOW!!
I only read m/m/m once.
I'm not really a fan of the genre but I commend you for reading an m/m/m/m!!
Sorry this one wasn't a hit for you.
Lovely review, Exina!! :)
xoxoxo

Great review, Exina! Sorry you didn't enjoy this one more! Hope your next read is better! xx

Penelope wrote: "Lol, I think people ride tractors out in the bush? Cause that's where all the farmers are, lol."

Patty ❤️❤️ Belongs To ❤️Kellan❤️Jesse❤️ Miller❤️and Archer❤️❤️ wrote: "WOW!!
I only read m/m/m once.
I'm not really a fan of the genre but I commend you for reading an m/m/m/m!!
Sorry this one wasn't a hit for you.
Lovely review, Exina!! :)
xoxoxo"

Thanks, sweet! In M/M/M genre, I really recommend Three's Company to you. It is sweet, steamy and fun!

Brandi wrote: "Great review, Exina! Sorry you didn't enjoy this one more! Hope your next read is better! xx"

Always appreciate your honest reviews. I hope your next read is a winner!

Delta wrote: "Always appreciate your honest reviews. I hope your next read is a winner!"