Sean Barrs the Bookdragon's Reviews > Bring Up the Bodies

Read 2 times. Last read June 19, 2017 to July 2, 2017.
Mantel is such an excellent writer; her prose is eloquent and artistic, beautiful even.. Few writers have such skill. She uses every grammatical tool at her disposal to give her novel a strong individual sense of stylistic flair. And that’s just the surface level of her sentences; she also uses metaphor and constant allusions to take it to another level entirely.

For example, my favourite passage in the book:

“He looks around at his guests. All are prepared. A Latin grace; English would be his choice, but he will suit his company. Who cross themselves ostentatiously, in papist style. Who look at him, expectant. He shouts for the waiters. The doors burst open. Sweating men heave the platters to the table. It seems the meat is fresh, in fact not slaughtered yet. It is just a minor breach of etiquette. The company must sit and salivate. The Boleyns are laid at his hand to be carved.” 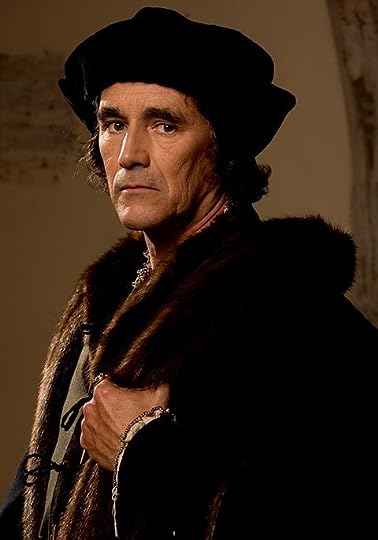 This is so much stronger that its predecessor Wolf Hall. There is a stronger narrative drive and Cromwell has more momentum and enthusiasm for achieving his ambitions. He is also getting used to his power and his influence, testing them to see how far they can reach. A risky game, but we all know what came of it in the end. He is a very intelligent man, able to root out evidence for the king when there is none to be found. The Boleyn family, though politically smart, were vastly out matched by the cunning of Cromwell. When the king wanted them out, Cromwell didn’t have to work too hard to achieve it.

Mantel has improved on her style so much here. Wolf Hall was exceptionally good, but it did have many flaws. It was a hard book to read. My main problem with it was trying to discern who the “he” in question within the writing. For example Cromwell was referred to “he” whist talking to another “he” about a pair of “he’s” they were feared were scheming against them. Uncomfortable stuff, though she seems to have listened to the criticism her first book received and the result is a much stronger piece of writing.

So what’s it all about?

Boredom. Boredom and anger. Henry VIII’s new wife Ann Boleyn has failed to give him a son, such a terrible thing. The entire situation is ridiculously ironic considering the one child she did give him, the future Elizabeth I, would become a much better monarch than he could ever be. The fat fool didn’t need a son! But his silly little masculine ego demanded one. Sure you could talk about the politics involved in having a male offspring, but, again, just look at what Elizabeth did by herself. She had no direct heir. When she died she gave the throne to the King of Scotland. Enough said.

Cromwell has a large task on his hands, but he was more than capable of carving up the Boleyns. The only real complication was he had to do it within the limitations of the law. The king can’t be above his own mandates, and he has to be able to justify his brutal actions even if the entire world new he was full of rubbish and would bend the system to his own ends and act all innocent about it. Then blame his councillors’ years later for his own decisions. Cromwell, naturally, goes to work. But his day of reckoning draws very near.

I can’t wait to read the final book in this series. It’s obvious how it will all end: the chopping block. It will be interesting to see how Mantel handles the fall of Cromwell. I also wonder if she will win the man booker prize again. I think she’s great, but I don’t think she deserves it again. The prize is for innovating, high quality writing. But her writing is no longer innovative. It’s a regurgitation of what she has already done (not a bad thing) but I don’t think she should win the prize multiple times for doing the same things. Still, I'm excited for the third book.
138 likes · Like ∙ flag

Sign into Goodreads to see if any of your friends have read Bring Up the Bodies.
Sign In »

I preferred this book over the Wolfhall.

Is the third book out? Does anyone know?

Micky wrote: "Is the third book out? Does anyone know?"

not yet, no release date set either.

How could King Henry have anticipated what his daughter Elizabeth would accomplish, or that she would come onto the throne? I find Mantel unreadable for her pervasive moral cynicism and her strange prose. Nobody in the 16th century or for that matter now sounds like that.

Mandel is an excellent writer, waiting for the 3rd book in the trilogy. The creative unity between her book and the PBS Wolf Hall is a true delight. And how about that soundtrack!

Hi there. Your comment on Mantel not winning the Booker again made me wonder if it's possible for a writer to be highly innovative every time? Also, i'm interested in what you mean by innovative writing. I think the greatest of writers are instantly recognizable by their unique style. Thanks.