Cristina Monica's Reviews > On the Fence

Charlie is a sixteen-year-old teen who likes playing sports, especially soccer, watching sport games and hanging out with her three brothers. 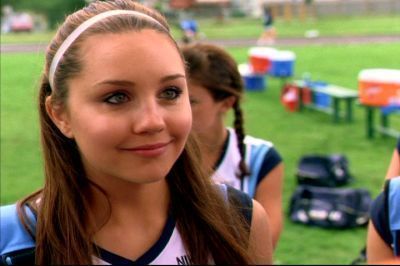 She’s not your typical teenage girl since she prefers watching a soccer game (or playing it) than go shopping or reading or going to the cinema, etc.

That’s why she and I couldn't quite ever be best friends but she’s a nice girl so, sure, we could at least get along. But, see, I’m the kind of the girl who will exclusively cheer for players and not be one myself, except if we’re talking about badminton, dancing, cheerleading or gymnastics (which aren’t in Charlie’s list of sports to practice.)

The point is that I couldn’t very much connect with her and…why is she wearing a dress on the cover? Yes, she has a bit of a character development and yes she does get more feminine but, the way I see it, that pretty little summer dress doesn’t match her personality so when I look at that cover it doesn't feel like it's Charlie that I see with the guy.

While I think this was a clichéd story (I mean come on…you fall in love with your neighbour who you’ve known since being a child and it takes you to date another guy to see it? Yup, not impressed) and a quite unrealistic one, (who actually has that of a good relationship with their three brothers + father + gets a job without even wanting one?) it was also fast-paced, fun and I certainly had a good time reading it.

The romance was light and cute, absolutely typical of contemporary YA. Nonetheless, that didn’t keep me from thinking it was good and lovely. Braden wasn’t actually my favorite guy, even though he and Charlie get along very well and have much in common. I prefer Evan all the way. That’s when I concluded that she and I are quite different. Is that a bad thing? Absolutely not. But in order to love a certain book, I like feeling some connecting to a main character and feel common interest.

I was lying, actually, when I truly thought she and I were not alike was when she said in the story that she doesn’t know who wrote Pride and Prejudice.

Exactly! I couldn’t believe my eyes! Maybe you would thing that it's okay (I’m not saying it's necessarily a bad thing) but that really killed the small connection I had with her because Pride and Prejudice is my favorite classic (and I’m in love with Mr. Darcy—who isn’t? *winks*)

The writing was good and, in general, the story was interesting. Plus, even though the characters felt clichéd, I liked how the story went. It may have been predictable but there were always small things happening that made that fact not an obvious problem.

I would recommend this to anyone seeking a light contemporary read perfect for summer (especially if you’re a fan of sports and characters similar to Charlie.)

Sign into Goodreads to see if any of your friends have read On the Fence.
Sign In »

She doesn't know who wrote P&P?! *stares in disgust* Hahahaha! I haven't read a Kasie West. Maybe I will, but I won't start with this =)) Great review, Lola!!

NO, she doesn't! I was SHOCKED. :O *approves your disgust* This is actually my first Kasie West and now I'm curious to see how Pivot Point turns out. I just hope the MCs won't be alike. Thanks, Paula. xx

Wonderful review Lola! Been seeing this one around, but I think based on your review I will pass :P

Rachel (Reads Ravenously) wrote: "Wonderful review Lola! Been seeing this one around, but I think based on your review I will pass :P

It wasn't bad! But ahah I don't think you'll feel connected to the MC either. :P

I knew I wasn't the only who would be shocked. :O EVERYONE, boy and girl, should know about Jane Austen haha.

Great review Lola! xx
I was just yesterday looking at this book and thinking I could read this next. Hm, I'm not so sure now that I'd enjoy it. I hate clichés.
Also, she's never heard of Austen? ;O

Wonderful review, Lola, & well said! I hate when the actually characters in the story, contradict what's on the cover!! Grrr! ;)

Nice review Lola. :) I keep meaning to bump P&P up on my reading list (especially after I watched this film adaptation recently). Maybe sometime soon I'll get to it.

Have you ever seen Bride & Prejudice? It's kind of a British-Bollywood take on the story (current day).

Beatrix wrote: "Great review Lola! xx
I was just yesterday looking at this book and thinking I could read this next. Hm, I'm not so sure now that I'd enjoy it. I hate clichés.
Also, she's never heard of Austen? ;O"

NEVER HEARD OF AUSTEN. It killed me.
LOL
It's cute though and a fast-read. :P Thank you!

Awesome! :D It's pretty fun. Looking forward to your thoughts. :)

Stephanie* wrote: "Wonderful review, Lola, & well said! I hate when the actually characters in the story, contradict what's on the cover!! Grrr! ;)"

I know!! It's all like uuugh marketing. Thanks! :D

I HAD to say that she doesn't know Austen haha. Thanks! :D

Courtney wrote: "Nice review Lola. :) I keep meaning to bump P&P up on my reading list (especially after I watched this film adaptation recently). Maybe sometime soon I'll get to it.

I actually preferred the movie to the book...the actors were in my opinion really good and made the movie seem so accurate and special. But I would really recommend to read the classic too. :)

I think I started to watch that movie you're telling me about the kinda stopped it because the quality was poor XD or maybe I'm just mistaking for another movie.

Lemme just grab my P&P book and slam this girl with it! And here I thought we'd be great friends.

Tanja (Tanychy) wrote: "Lemme just grab my P&P book and slam this girl with it! And here I thought we'd be great friends."

I second that! ...but at the same time she does live in a different 'world.'


Still, no excuses, I second that!

Thanks, Aly! Nice to see we feel the same way about it. :D

Does she even talk about soccer players much? I love soccer so I would totally read this for that alone, unless it's one of those "hi I like/play soccer but I'm not going to talk about it because I have more important things!!! My boyfriend!!!"

No, not that kind of girl (for the boyfriend thing.) She does talk about soccer when in the right moment and she goes to a soccer camp (but doesn't stay long.) I think you would enjoy it if you think the main character is one you would like reading about. :)

Super review! By the way, I haven't read P&P either. Can we no longer be friends? :(

That's not the problem. The problem is that she didn't know who was the author. That's what shocked me. I'm not that selective with my friend, LOL. ;) And you're super nice so I don't want to lose you; thank you!

Okay I know that. Charlotte Bronte? Okay I'm joking, sorry. :P
I'm going to read it as soon as possible now. Must impress Lola! :D And a big thank you for that compliment. You're really lovely too. :)

Lola wrote: "Tanja (Tanychy) wrote: "Lemme just grab my P&P book and slam this girl with it! And here I thought we'd be great friends."

I second that! ...but at the same time she does live in a different 'worl..."

awwww that's so sweet of you ;) I don't need Charlie since I have you ;)

Hahahahahah ooh, I hope you'll fall in love with Mr. Darcy just as much as I did. *.*
Thank you! And it's my pleasure. xx

Exactly!! Well we're not alike at all (Charlie and me) but I like reading and she doesn't. HA.

Fab review! I have this one in my TRP, think one of my daughters are reading it.:D